As Everton prepares to open the new campaign a week from Monday, the aim could not be any more clear: come out firing on all cylinders, score plenty of goals early on, and avoid the slow starts that have plagued the team in seasons past. But just how bad did the scoring drought get at times last year?

Back in January, I wrote a post analyzing how Everton's offensive and defensive performances matched up with expectations, which only served to confirm the conclusion that the lack of firepower was more than cancelling out what was actually a very solid defense. But as we all know, as the year went on and our saviors Jelavic and Pienaar began to make their presence known, the performances steadily improved. So I decided to update the original post to try to determine to what degree Everton really improved down the stretch, and to see what that means for 2012-2013.

Here is the Everton fixture list from last season, expressed graphically. (click on the image to enlarge, or a Google Doc of the data can be found here) 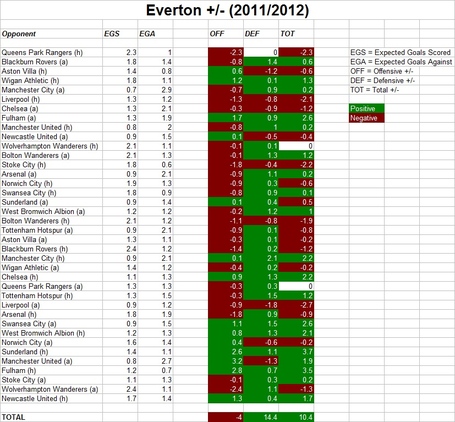 In case you missed the last post, what this chart shows is basically how Everton actually performed in each individual game relative to how they should have performed. For each match, we see the expected goals scored (EGS) and expected goals allowed (EGA); in other words, how an average team would be expected to perform. Then, in the colored boxes, we see how Everton actually did offensively, defensively, and in total (green boxes represent a better than average performance, while red boxes represent a below average performance).

What this does is allow us to weigh the results of matches played against opponents of varying skill levels. For example, drawing 1-1 with a team like QPR at home is pretty disappointing, while you'll take that same result at Old Trafford every single time. This chart puts every match on even ground.

Taking a look at the data, the impact of of our January signings is clear, although it did take a while for the new players to have an effect on the results. Starting with the match away to Swansea City, Everton posted six straight positive offensive performances, and closed out the year strong at home to Newcastle. The defense remained consistently reliable for the entirety of the season, registering only eight negative performances out of 38 matches.

After completing this analysis, I have to say that I have a lot of hope for a quick start. Pienaar and Jelavic are fully integrated into the squad, and with the benefit of a full preseason there shouldn't be any reason Everton shouldn't be able to repeat the offensive numbers they put up with regularity down the stretch last season. Of course, we've heard all of this before. Now it's up to the players (and the manager) to finally put an end to what has become a disturbing trend.