Going to Stoke is always a tricky task, as the crowd is loud, the game is chippy, and the Rory Delap long throws come one after another. I see a lot of Everton in Stoke City, so is it really any surprise that this game ended in a 1-1 draw? This match was a pretty even affair, despite Everton's significant advantage in possession, and in the end this was a candidate for most predictable result of the season. The only real surprise to me was in who didn't make an appearance.

Where was Ross Barkley?

- The first half wasn't a work of art, but it was an enjoyable enough 45 minutes of football that Everton certainly had the better of. But for all of their possession, the Toffees never really looked too dangerous, and on the other end of the pitch one of Delap's throw-ins seemed destined to end up behind Tim Howard. Delap might be the definition of a one-trick pony, but I have to admit I still get a kick out of watching him perform that one trick. It never wound up hurting the Blues, but the Everton defenders were on edge every time he launched the ball into the penalty area.

- The only other talking points early on were a decent half-chance that deflected off of Nikica Jelavic (the Stoke defense was staunchly refusing to allow the striker consistent service) and an all too predictable injury to Victor Anichebe. Why Anichebe was starting in the first place was a bit of a mystery (more on that in a bit), but it was still disheartening to see the Nigerian forced off before a quarter of the game was completed. His replacement, Magaye Gueye, was so brutal that he himself was subbed before the end of the match.

- Finally, in the 44th minute, Everton broke through with an ugly-looking goal off a free kick. Instead of taking a shot on goal, the ball was cleverly played off to the right wing for Tony Hibbert, who crossed into the box aiming for Tim Cahill. I don't think Cahill ever actually made contact with the ball, but the ball did carom off a couple of Stoke players before Peter Crouch steered it off his shoulder and into his own net. 1-0 as the teams broke for halftime, though no one was really sure how.

- In the second half, Tony Pulis waited twenty minutes before opting to roll the dice with a triple substitution. One of the three newcomers, Cameron Jerome, wasted no time making his presence felt. After deftly catching a long pass, Jerome took on two Everton defenders with no support in sight. However, Johnny Heitinga and Phil Jagielka were unable to contain Jerome's pace, as he marauded forward and fired his shot off a diving Jagielka and past Howard for the equalizer.

- And that was about it, as the rest of the match played out without much fanfare for a 1-1 draw that I think can be classified as "good enough." Like I said before, Stoke is a tough place to get a result, so you really can't complain with a draw... especially considering Liverpool somehow lost at home to the same Fulham team that Everton just got through dismantling 4-0!

- Finally, my only real quibble with the match was David Moyes's decision to exclude Ross Barkley despite what seemed to me to be numerous opportunities to give him a run-out. First, it seems like a fairly innocuous match in early May against another team with little to play for would be the perfect time to hand Barkley a start, but that didn't happen. Fine, then why not put him in when Anichebe was felled? Or even for the last fifteen minutes when Gueye was subbed?

I get that he's young. I get that he might not be ready to contribute regularly to the first team just yet. But how do we know? We don't, because he's not getting significant playing time to prove himself one way or the other. If not now, then when? These last few games are the perfect opening for Moyes to ease the youngster into the team with minimal pressure, but he still seems to think that starting the likes of Victor Anichebe benefits us more in the long run. Confusing.

T. Howard - No chance on the goal, and not much else to worry about. 6
J. Heitinga - Stood tall and sturdy throughout the proceedings, though he did very little to contain Jerome on Stoke's goal. 6
P. Jagielka - See Heitinga. 6
S. Distin - Did fine as he continues to prove to be an acceptable presence at left back. Good to know he can handle the position, at least temporarily. 6.5
T. Hibbert - Played one of his more complete games. Did good work defensively, and did very good work getting dangerous crosses into the box. 7
M. Fellaini - Fell into some of his old habits with a few excessive fouls, but overall had a very solid game winning and keeping possession. 6.5
T. Cahill - Played some good football in an attacking role and forced Crouch into a costly error on the own goal. A welcome change from his usual one-dimensional approach. 7
S. Pienaar - Lively and creative, as has been the norm since his return. 7
L. Osman (McFadden 89) - Positives: His neat passing within the midfield. Negatives: Poor shooting. 6.5
N. Jelavic - Left frustrated today, as he was held off the score sheet for the first time since the West Brom game a month ago. Matthew Upson did a good job denying him the ball. 5
V. Anichebe (Gueye 22) - Showed some energy before picking up an injury, which I still can't seem to find any info on. 5.5

M. Gueye (substitute 22) (Stracqualursi 79) - Oh dear. He seems to have run out of ideas. Might benefit from the upcoming summer break to regroup. 3
D. Stracqualursi (substitute 79) - Honestly, I can't remember much that he did, so I'll view that as a negative. 4.5
J. McFadden (substitute 89) - Can't rate; not on long enough. N/A

Man of the Match: Tony Hibbert 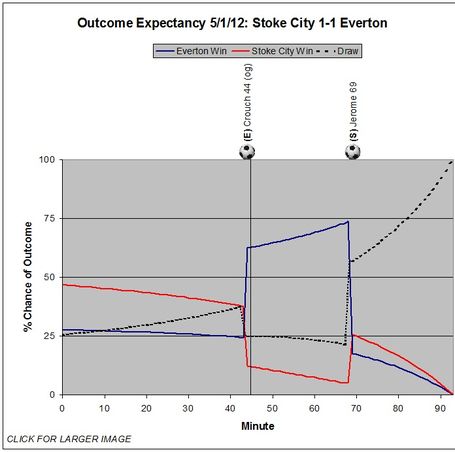