How's that for a sendoff?

While it wasn't quite the epic 7-1 thrashing Sunderland suffered at Goodison Park back in 2007, this match was still a spectacle in its own right, and a very positive shot in the arm heading into the game. The first half was relatively quiet in terms of scoring opportunities, although Everton bossed the period with the majority of the possession. Then the floodgates opened in the second half, with Everton rapidly scoring three times in the space of six minutes to provide a comfortable four-goal cushion. Magaye Gueye had opened the scoring earlier with his first goal for the team, a tally that proved to be the game-winner on what what was a very enjoyable Easter Monday for the Blues. More stuff on this one after the jump...

- My first thought is that this result is a massive confidence boost for the team as they head off to London, but there's always a question of how much of an effect momentum has in the game of football. However, my view is that a 4-0 win before the biggest game of the season certainly can't hurt anything. Of course, Baines, Jelavic, and Cahill should all be reinstated by Saturday, so the team that demolished Sunderland today will look very different then. So yeah, who knows.

- Nothing really stood out in a first half largely devoid of excitement, but Everton always looked more likely to take control of the match. If a game with a first half like today's finishes 0-0, the team is derided for its lack of urgency. But when the team scores four goals in the second half, the team is lauded for its patience. Football.

- The play of Everton's midfield was simply on another level today, and that was clearly the key to the second half goal-fest. Gueye scored the first goal, but Steven Pienaar and Leon Osman also played pivotal roles in the buildup, with Pienaar deftly heading the ball to Osman for a dangerous shot that Simon Mignolet parried into the path of Gueye. The Frenchman lashed an unstoppable rocket past the Sunderland keeper, his first (and hopefully not his last) goal for the Blues.

- Everton kept the status quo for the next twenty minutes or so before putting the result out of question with a startling sequence of three goals in six minutes. The second and third goals were remarkably similar, scored by Pienaar and Osman from similar positions with similar curling efforts that went for accuracy over power. The fourth and final marker was an ugly own goal that confirmed the game as a laugher.

- It was good to see James McFadden get a run-out, and even better to see him take advantage of the opportunity. His signing was met with sarcasm from some corners, but I think that was more frustration at the lack of impact signings last summer rather than true enmity for McFadden. He's a flawed player, tremendously talented but never having been quite able to put it all together, but I've always enjoyed watching him play (his wonder goal against Charlton at the end of the 2006-07 season still stands out in my mind). He could possibly see some more league action as the season winds down.

- You know what, guys? I really want to win this next game. I really, really do.

T. Howard - No real saves of note to make against a punchless Black Cats attack. 6
T. Hibbert - Much better after his awful showing over the weekend. Wasn't afraid to get stuck in when the situation called for a hard tackle. 6.5
P. Jagielka - Made a couple of really nice tackles and showed improved positioning. 6
J. Heitinga - Hardly troubled, but was assured as usual. 6
P. Neville (Coleman 83) - Slotted in at left back without fuss. He gets some grief from fans on occasion, but he's had to show his versatility this season and deserves some plaudits for doing so. 7
M. Gueye - Opened his Everton account, but was having a positive impact before that as well. With Pienaar cup-tied, he could be in line for a massive start on Saturday. 7
M. Fellaini (Anichebe 78) - Just a very solid all-around game. Some fans may just be content that he didn't see any stretchers or red cards. 7
L. Osman - Excellent. I don't think enough people are recognizing how well Osman has played this season. Today he did a little bit of everything, including a goal and an assist via a saved shot. 8
S. Pienaar - Fantastic. We simply must make his move permanent in the summer. Almost every match he plays in he's one of our top two or three players, and I just hope that his absence doesn't hurt us too much in the cup. 8.5
J. McFadden (Drenthe 65) - A surprise starter (I think most fans expected Anichebe), but I thought he definitely contributed with a shot and some decent corners. He can still play some semi-attractive football when given the chance. 6
D. Stracqualursi - Plenty of running but rarely looked threatening. This game was won in the midfield. 5

R. Drenthe (substitute 65) - A welcome return for the enigmatic Dutchman in the role where I think he fits best: super-sub. Created the second goal. 7
V. Anichebe (substitute 78) - Another player I love coming off the bench, it was his shot that Jack Colback deflected into his own net for the fourth goal. 7
S. Coleman (substitute 83) - Can't rate; not on long enough. N/A 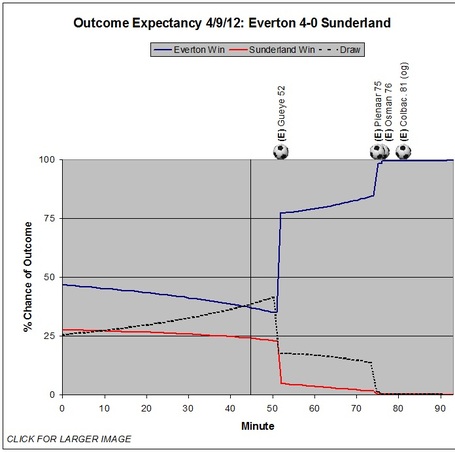