Taking a gander at the Premier League table prior to the match today, the realization began to sink in that Everton do not have much of anything to play for over the next month and a half in the league, finishing above our hated neighbors notwithstanding. Our boys in blue aren't catching Chelsea or Newcastle for sixth, so the goal must be to hold off any pursuers who might take seventh from our grasp. Not quite as exciting as an FA Cup derby semifinal, but hey, it's football and it's important to keep up our good form heading into the big game at Wembley. Today Everton extended their streak of scoring multiple goals to four straight matches, but an uncharacteristically leaky defense was the team's undoing in a 2-2 draw at Norwich. More analysis after the jump...

- This may come across as petty, but I have to say that the production they have going on at Carrow Road struck me as very... Mickey Mouse. First of all, no team in the Premier League should play music when they score. Period. This isn't the U.S., where we pride ourselves on blasting out "Zombie Nation" or "Rock and Roll Part 2" at ridiculous decibel levels after every goal/home run/touchdown/etc. Along those lines, the announcer shouldn't have to encourage the fans to "Make some noise for your team: the Canaries!!!" before the opening kickoff. If your supporters can't be arsed to get their butts out of their seats and cheer on the players without an annoying cheerleader egging them on, then perhaps your team would be better served playing in the Championship. Or the NBA.

- Maybe I could let that stuff go, if the crowd wasn't so bloody whiny. Seriously, I don't think I've ever heard so much bellyaching (most of it unwarranted) from a group of fans at a Premier League game. It was quite unbelievable. Every single little tiny bit of contact was greeted with a roar that suggested an Everton player had just assaulted someone. Just a really unpleasant atmosphere, overall.

- If there was any doubt before, this game surely cemented Phil Jagielka's relegation to the bench for the semifinal. Though he has looked much better since his shocker at Anfield, it remains clear that the Johnny Heitinga-Sylvain Distin partnership is currently Everton's best option, and that point was driven home further after Jagielka was guilty of poor defending on both of Norwich's goals. I still think he is a terrific player and maybe even our future captain, but he has been unlucky with injuries this year, and the timing and chemistry just aren't where they need to be on a consistent basis right now.

- That Nikica Jelavic has an eye for the goal, eh? After two more one-touch goals, I'm getting even more excited for what the future could hold for the Croatian striker. The first goal was a good finish, but credit must also be given to the guy I just got finished criticizing, Phil Jagielka, for a very nice pass from an unfamiliar position. The second goal was very similar, using the velocity generated from the cross and simply redirecting the ball past a stranded John Ruddy. Jelavic is also finding an understanding with Tim Cahill, who I thought played well today aside from sending his best chance of the game right at the keeper.

- It's going to be interesting to see the team David Moyes decides to go with on Monday. With just one day off before Sunderland come to Goodison Park for their third meeting with the Blues in a month's time, it's going to be a quick turnaround. Considering the semifinal will be just five days away, I wouldn't be at all surprised to see Moyes continue his controversial rotation policy and make several changes. Distin, Gibson, Cahill, Jelavic, and even Baines all seem like prime candidates to be rested, while I'd also bet on seeing Heitinga and Victor Anichebe in the starting lineup.

T. Howard - Might have pulled off a save on at least one of the goals, but it would have had to be special. Can't fault him too much. 5.5
T. Hibbert - Had a brutal game. Was a turnover machine and defended poorly, which is a bad combination. 3
P. Jagielka - Had an assist, but on the end of the pitch he's paid to defend he was an onlooker. Arguably at fault for both goals. 4
S. Distin - Not very good; just seems to work better with Heitinga. 4.5
L. Baines - Did well to push the attack forward despite the left channel frequently becoming congested. 6
P. Neville (Fellaini 56) - I'd have to go back and check to be sure, but I believe he should have been marking Jonny Howson on Norwich's first goal. 5
D. Gibson - Extended his unbeaten streak with a typically efficient performance. 6
S. Pienaar - Had good ideas but looked frustrated when they didn't come to fruition. 5.5
M. Gueye (Coleman 45) - Wasn't particularly strong, but I thought he deserved at least another quarter of an hour. 5.5
N. Jelavic - The "silent assassin" has to be happy with his day's work, scoring a brace and working well as the lone striker. However, I'm going to knock off half a point for a shameful overreaction to a slight bump he received late in the match. 8
T. Cahill (Anichebe 81) - He'll be seeing that gaping net in his sleep, but his work rate was top notch as usual and he seemed to link well with Jelavic. 6

S. Coleman (substitute 45) - It's been a bumpy season for Coleman, and right now he's struggling to make an impact. Tried hard at least. 4.5
M. Fellaini (substitute 56) - He's the type of player who needs a full 90 minutes to really maximize his impact. 5
V. Anichebe (substitute 81) - Can't rate; not on long enough. N/A

Man of the Match: Nikica Jelavic 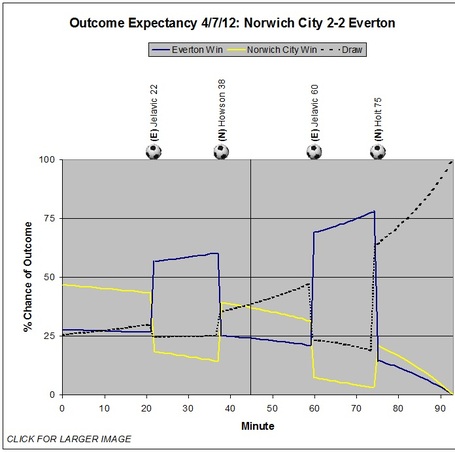