Marouane Fellaini - Master of the Midfield or Turnover Machine?

Share All sharing options for: Marouane Fellaini - Master of the Midfield or Turnover Machine?

Watching last week’s match against QPR was kind of a dispiriting affair. With the exception of one thunderbolt from Drenthe, everybody seemed to just muddle around with middling performances. Afterwards, in the match report seanathan grudgingly gave Fellaini the man of the match award by default. It was an interesting pick because while I thought he had a pretty good match, during the live thread fellow writer SibiGnana was of the opposite opinion arguing that Fellaini, was markedly subpar. His exact words were,

Fellaini has been real aggravating today

Just seems very lazy and is giving up the ball a bunch."

So, like any good nerdling, when the game was over I took a look at the numbers to see what I could see. Take the jump and behold the fruits of my statistical labor.

I started with the area we all know that Fellaini is strong at, the defensive side. Last week, The Executioners Bong put up a great post breaking down exactly how aggressive Fellaini is in the tackle, and Saturday was no exception. As the pretty picture shows, Fellaini made 5 successful tackles in 6 attempts and had 3 interceptions. 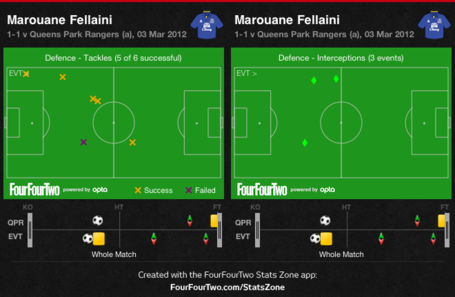 Any way you slice it, that’s a huge impact on the game defensively. And it’s also important to look at the areas where he was winning the ball back for Everton. Two of those successful tackles were deep into the deep left corner, where one can surmise he was successfully covering for a Leighton Baines foray forward. Baines is a dangerous weapon (perhaps the best that Everton have) and Fellaini’s ability to cover that area of the field is an important part of setting the feisty defender loose.

Of course, a strong defensive performance from the Belgian isn’t all that surprising. Its his production going forward that was suspect in some eyes. So, let’s take a look at the passing numbers. 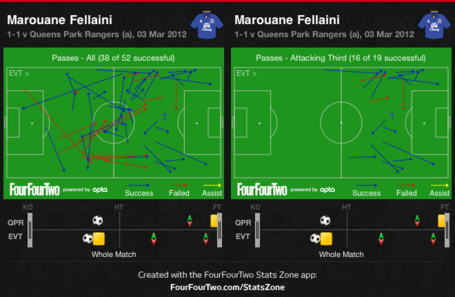 In the overall passing stats on the left there are certainly a disturbingly large number of red lines. He only completed 73% of his passes (38/52). If we take into consideration that Fellaini was actually quite efficient in the attacking third, completing 84% of his passes (16/19) we can isolate what seems to be the problem. In his own third and the middle of the pitch Fellaini only completed 22 of 33 passes. Completing 67% of your passes, while trying to initiate the offense, just isn’t good enough.

I don’t think that’s quite the end of the story though. I want to consider two other things. First, Fellaini’s failed pass attempts seem to be clustered in one very specific location. Fellaini was unable to complete an alarming amount of passes from the deep right central midfield location. From a positional standpoint it's odd that over the course of the game he attempted so many passes from that area given that it’s Phil Neville’s position. So, I wonder if perhaps Neville was playing his trademark short, sideways passes to Fellaini and leaving him in bad positions trying to create forward momentum out of nothing. In order to compare I looked at the Chelsea game where Fellaini was paired with a less compulsively conservative midfield partner in Darren Gibson. Look at the difference in the results. 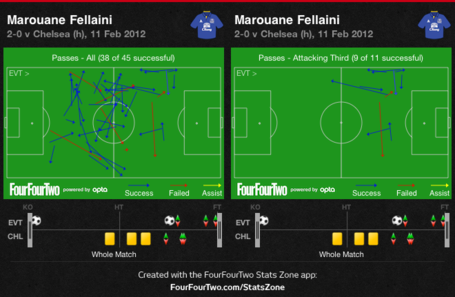 It turns out that with Gibson playing Fellaini attempted many fewer passes from that part of the field and he had an 84% pass completion rate. Excluding the final third his completion percentage actually ticks up to 85%.

And that brings me to the second point I wanted to consider. To what extend is Fellaini’s poor passing performance the result of being asked to do something he shouldn’t have to? Why was be put in a position to have to be a playmaker? Fellaini has numerous unquestioned strengths, but acting as a deep lying playmaker isn’t one of them. When he's paired with the relentlessly negative Neville in central midfield, Fellaini is forced to baby sit for his partner, and might be trying to force the issue creatively going forward.

In other words, basically, everybody was right when they watched Fellaini play on Saturday. He was a force defensively (as always) and had the ball at his feet a lot (52 passes attempted were the most in the game, 13 more than anybody else, and his 16 passes completed in the attacking third were also the most of anybody). At the same time though, he gave the ball away much too frequently trying to move the team into the attacking third. I tend to lay the blame for that at Neville’s habitually back passing feet, and on Moyes for sending Neville out into central midfield to begin with. SibiGnana on the other hand put the responsibility squarely on Fellaini’s preposterously large shoulders. What say you denizens of the internet? What did you think of Fellaini this weekend?