This was one of those games in which both teams would really only be satisfied with taking all three points, and as usually seems to happen in such situations the result was a draw. This was a disappointing performance all-around for Everton, who truthfully might consider themselves a tad lucky to have avoided defeat. QPR were the superior team for the vast majority of the ninety minutes, and it was only their poor finishing that saved Everton's blushes. This is the type of match that good teams find a way to win, but the problem is that Everton is a mediocre to slightly above mediocre team who don't always have that next gear to go to when the going gets tough.

Take the jump for more coverage of Saturday's contest...

- Royston Drenthe's goal was one of those moments as a fan when you shout out loud, "NO DON'T SHO... YEEEEAAAAHHHH!!!" Minutes before the Dutchman had sent a long-range effort into the traveling fans in the upper tier, so you do have to give him some credit for his unabashed aggressiveness regardless of the success of his previous tries. The shot was truly a beaut, a dipping thunderbolt that Paddy Kenny had no chance of stopping. 1-0!

- Sadly, five minutes later the advantage was gone, thanks in large part to a silly tackle by one Royston Drenthe. The challenge on Adel Taarabt just outside the side of the box was a bad one, but that was only half of the problem. Tim Howard must bear the rest of the burden for his confused positioning on the resulting free kick, allowing Bobby Zamora a relatively simple header for the equalizer. It was a bad goal to allow, and a terrible time at which to allow it; it re-energized Loftus Road and put QPR firmly back in the driver's seat for the rest of the match.

- That being said, it could have been much worse minutes before the break. Taarabt ignited the insanity when he struck Howard's left post, and after the ensuing scramble Akos Buzsaky found himself with an open net to aim at but could only hit a stranded Howard's right post. The whole sequence could be shown in a presentation entitled "How to Give Up a Soft Goal Minutes Before Halftime," but there's a reason QPR are in danger of relegation.

- In the second half, neither team had a plethora of chances but I don't think anyone would argue that QPR didn't deserve the win more. Everton increasingly resorted to hoofing the ball down the field in the hopes of a lucky bounce or a mistake by the QPR defense, but these efforts were always repelled with ease. Nikica Jelavic made his return from injury to team up with the Stracq for the final thirty minutes in a 4-4-2, but the formation wasn't cohesive and was ultimately unsuccessful. A big part of why was Phil Neville's general poor play and Leon Osman's struggles in his own comeback.

T. Howard - I love Timmy and he made a great early save off Buzsaky's free kick, but the fact is he flapped hopelessly at the cross that Zamora headed home. 4.5
T. Hibbert - Average at best; often found himself out of position and offered little going forward. 5
J. Heitinga - The pick of the back four. Stayed sturdy throughout. 6.5
S. Distin - Acceptable for the most part, although his clearances were a bit aimless at times and he committed one or two naive fouls. 5.5
L. Baines - Maybe he was suffering from a bit of a national team letdown, but in any case he struggled to get going in this one. 5
R. Drenthe (Osman 63) - Minutes 31 to 35 were Royston Drenthe in a nutshell. He must drive Moyes insane, but being able to score spectacular goals is a quality that shouldn't be scoffed at on this team. 6
M. Fellaini - The best of the bunch by default. Played a key role in the buildup to Drenthe's goal and did his best to keep things ticking in the midfield. Too many fouls, though. 6.5
P. Neville - Wow, did we miss Darron Gibson today. Neville failed miserably in replicating the Irishman's role, so Fellaini was basically forced to do half of Neville's job in addition to his own. 4
S. Pienaar - Did okay, but wasn't able to connect consistently with Baines or any of his teammates. 5.5
T. Cahill (Jelavic 63) - Very quiet. Rightly subbed; had he been removed at halftime I'd have had no complaints even. 4.5
D. Stracqualursi (Coleman 89) - A couple of chances but I thought this was one of his least inspiring showings. The lack of service is noted, however. 5

L. Osman (substitute 63) - Why oh why does Moyes insist on playing him on the wing? Osman and Coleman's substitutions should have been switched. 5
N. Jelavic (substitute 63) - Got himself involved, but couldn't find anything resembling an end product. Got to give him time and a few full games before passing judgment, though. 5.5
S. Coleman (substitute 89) - Can't rate; not on long enough. N/A 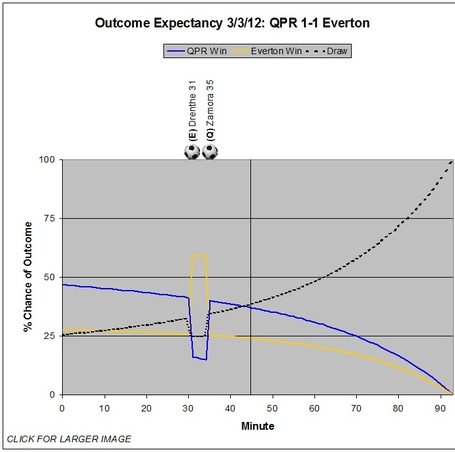