Okay, a bit of an overreaction perhaps, but there is little doubt that Everton played some of their most attractive football of the season during Saturday's sun-splashed matinee in Wales. The day started with a slightly odd team selection, as David Moyes chose not to drastically overhaul his starting lineup like he did ahead of the first FA Cup clash with Sunderland, yet still rested midfield talisman Marouane Fellaini and reinserted Phil Jagielka into the defense and Darron Gibson into the midfield. At the end of the day, the moves could not have looked any more genius as the Toffeemen comprehensively disposed of the Swans with an unexpected bit of flair. A full report is after the jump...

- The opening minutes (actually most of the first half, for that matter) offered little indication of what was to come, as Swansea City claimed the majority of what little chances there were on tap. Danny Graham shot tamely into Tim Howard's waiting arms and Joe Allen's knuckling shot came deceptively close, while Everton could only manage to counter with a handful of half-chances. However, the Blues were excellent in the 7-10 minutes leading up to the intermission, dominating possession and probing into attacking areas with regularity. It set a good tone for the remainder of the game, and overall it was a solid "road half" in a hostile environment.

- With the crowd trying their best to get into the game, Everton picked up right where they left off in the second half as they found plenty of space to roam deeper and deeper into the Swansea half. The level of dominance by the Blues, away from home in a stadium where only two Premier League teams have managed to win this campaign, was somewhat astounding. The pressure culminated in Darron Gibson curling a splendid effort that seemed destined for the back of the goal, but Michel Vorm pulled off an equally splendid save.

- Finally, Everton broke through when Leighton Baines was first fouled in a fortuitous position, then finished the job with a delicious free kick that Vorm had simply no chance to stop. Not much to say other than check out the highlights; it was a goal worth seeing again and again. No one could argue Everton's lead was deserved, either.

- At this point, Steven Pienaar decided to take ownership of the proceedings, taking advantage of the increased space available to work his tricks as the hosts attempted to get back in the game. Pienaar was absolutely brilliant in the second half, helped by his partner-in-crime Baines. Some of his wizardry was simply breathtaking, and it was the kind of performance that makes it seem absolutely vital that Everton makes his move permanent in the summer. However, you know a dud is coming at some point from Pienaar, so now he just needs the consistency.

- As it was, the final goal was actually set up not by Pienaar but by Marouane Fellaini, who had entered as a substitute. Fellaini overpowered Ashley Williams to set up Nikica Jelavic for a tap-in he couldn't miss. Though it was a simple goal, it was vindication for Jelavic who had put in a fantastic shift but was missing chance after chance before one finally went in.

- From there, Everton cruised to victory, with the result never in serious doubt. If a repeat of that second half is in store on Tuesday, a trip to Wembley should be a strong possibility. Now they just have to do it.

T. Howard - Very little to do. Saved Graham's early effort but was lucky to escape unscathed after getting caught in no man's land on Graham's second half header. 5.5
T. Hibbert - Did his job as usual, but looked a little out of sorts when asked to leave his comfort zone at the back. 5.5
S. Distin - Did just fine. Good to see him working well with Jagielka after the disaster versus Liverpool. 6.5
P. Jagielka - Quieted the naysayers with the type of showing we all know he's capable of. If not for Pienaar's second half emergence, he would have been my MOTM. 8.5
L. Baines - Great, great stuff today from Baines today. Ran all over the field, defended well, and terrorized Angel Rangel. Oh yeah, and scored an awesome goal. 8.5
L. Osman - Wasn't as noticeable as some of the others but I thought he had a quietly efficient game. Did the little things well. 7
D. Gibson (Heitinga 84) - The man. Doesn't. Lose. Something about him seems to calm the midfield, and he orchestrated play quite well. Great shot too. 6.5
T. Cahill (Fellaini 58) - I assume he was subbed with an eye on Sunderland, because he really wasn't doing anything wrong for me. Unlucky not to score off Jelavic's bicycle setup on what would have been a Goal of the Season candidate. 6
P. Neville - Coped well in an unfamiliar position. Definitely benefited from the left-hand side handling the lion's share of the work. 6
S. Pienaar - Didn't quite get going in the first half, but more than made up for it in the second. Creative, adventurous, and looked like he was enjoying himself. 8.5
N. Jelavic (Stracqualursi 82) - Could have (should have?) had a hat trick or more, but in the end you can't argue with a goal and a tireless effort. 7.5

M. Fellaini (substitute 58) - Definitely added another dimension to the team, and assisted on the second goal. 7.5
D. Stracqualursi (substitute 82) - Give him credit for working his way into some great positions, but he misfired on some golden opportunities. 6
J. Heitinga (substitute 84) - Barely on long enough to make an impression, but he won the ball a couple of times. 5.5 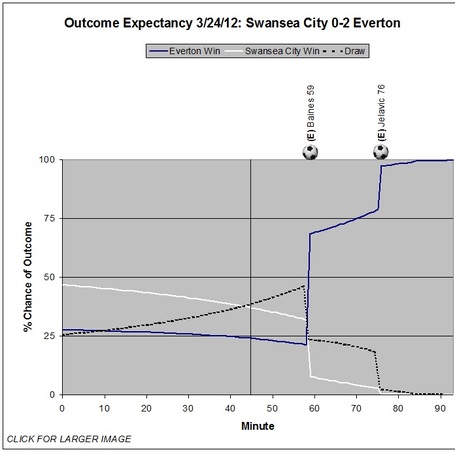