It was an immensely frustrating yet not entirely unexpected result this evening on Merseyside, as Everton were defeated 1-0 by Arsenal in a match that could have easily seen more goals for both sides. The major talking point to come out of the night was a series of offside decisions by the linesman that appeared to go against the Blues, not the least of which was the official taking a perfectly good Royston Drenthe goal off the board. Still, Everton have no one to blame but themselves for their miserable start which left them with an early hole to climb out of.

- The opening quarter of an hour was pure Arsenal dominance, an exhibition reminiscent of the days of the Invincibles. The only thing the Gunners couldn't manage to do was to put the game out of reach before the Goodison faithful had really settled into their seats, but the lead could have easily been 2-0 or 3-0. The opening goal should have come from Aaron Ramsey, who was beautifully set up by the otherworldly Robin Van Persie with an intelligent header, but Ramsey bungled his effort well off the mark.

- As it was, defender Thomas Vermaelen got the scoring started with an unchallenged header off an Arsenal corner. It was dreadful marking by Everton, as not even one of the five blue shirts surrounding Vermaelen managed to pick up his run, making the resulting finish all too easy. Arsenal continued to have virtually all of the possession early on, coming close several more times and held off only by the most desperate of Everton defending.

- As bad as the first fifteen minutes were, I would argue that Everton were the better team for most of the rest of the match. As halftime approached they continued to grab a stronger foothold in the match, culminating with what should have been the equalizer off the foot of Royston Drenthe. To be fair, looking at the replay it was an incredibly close decision that happened very fast, but the tape doesn't lie and the goal clearly should have been allowed to stand. Shame, as it was a really nice move by the Blues.

- Everton huffed and puffed in the second half, but they just couldn't find that one quality finish the crowd was begging for. Nikica Jelavic took quite a bruising over the ninety minutes, but I felt he had his strongest game since joining the club and was unlucky not to have his hard work rewarded. From what little I've seen of the Croatian, the one thing I'd nitpick about him is that he has to get used to the physical style of the Premier League and stay on his feet more often.

- Tim Cahill did okay but maybe looked a bit tired. Royston Drenthe and Steven Pienaar were both a mixed bag as ever, while I felt that Leighton Baines was possibly our best player. Drenthe, I felt, was exceedingly lucky not to be whistled for a foul in the box on Tomas Rosicky, which would have likely resulted in a thunderous RVP penalty. Perhaps he deserved a bit of good fortune though after the first half offside call.

- No player grades from me today; barely enough time to throw the bullet points together. I hate all these midweek games! (well... only when we lose anyway) 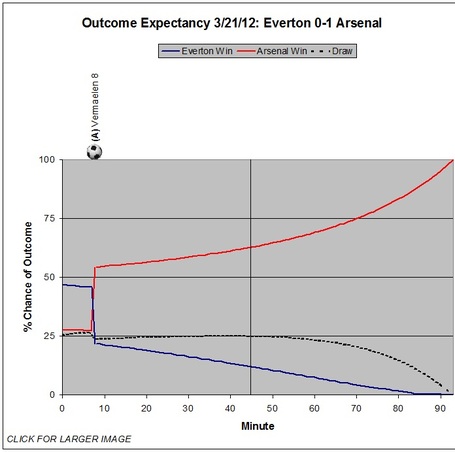