If you really want to read more about whatever that was, then by all means take the jump...

- Evertonians are up in arms over David Moyes's team selection, which featured six changes from the eleven players who defeated Tottenham Hotspur on Saturday. The general consensus is that Moyes made a huge mistake by disrupting the lineup that has been so successful over the last several weeks, and considering the final score it's hard to argue with that line of thinking. However, I'm going to try to at least partially take the contrarian viewpoint here.

First of all, how many of the six changes were really so egregious? It's not as if Moyes was bringing in reserve players; there was still more than enough quality in the side to win the match. I personally see no problem at all with starting Hibbert for Neville, Pienaar for Drenthe, or Stracqualursi for Cahill. In particular, I didn't want to see Drenthe anywhere near the starting lineup for the derby; it was a disastrous screw-up and/or red card waiting to happen. Cahill has been a Liverpool menace in the past, but that's a small sample size and no real harbinger of continued success against the Reds.

How about Rodwell for Osman or Jagielka for Heitinga? Well, the moves obviously didn't work out as both Rodwell and Jagielka had major stinkers, but hindsight is always crystal clear. The number of comments I've read from internet posters grumbling about Leon Osman over the years is somewhat unbelievable, so to hear complaints about his lack of inclusion is a bit strange. Heitinga has been immense this season, but Jagielka is also a quality defender who has been highly effective for Everton both this season and in the past. The simple fact is that Moyes took a gamble and it didn't pay off. Had Jagielka played a solid game the move would have looked like a stroke of genius, but unfortunately he (along with Distin, who has also been playing well it should be noted) was tentative and soft. I can see how the criticism of Moyes is justified here, but it could also have turned out very differently.

The one switch that completely baffled me and I offer no defense for was the decision to bench Nikica Jelavic in favor of Victor Anichebe. The ironic thing is that Moyes finally did what legions of fans have been demanding for ages and started the match in a 4-4-2 formation, clearly willing to have a go at what appeared to be a vulnerable Liverpool team. But then, to go and sit your new signing who looked terrific over the weekend in favor of Victor-effing-Anichebe was confusing to say the least.

I think the conclusion I would arrive at is that it wouldn't have been a huge crime to make a few changes to the team with an eye on Sunderland, it's just that Moyes went overboard and created an unneeded controversy in the process. If you had told me before the week began that we could only win one of the two games, I would not have hesitated to take secure passage in the FA Cup. We've beaten Liverpool before under Moyes, but we've never won a trophy; the league just isn't as important even if it is the derby. I just hope now that the squad isn't so deflated by the result yesterday that they are still rattled when they take the pitch on Saturday, because that would be the real disaster.

- And yeah, I really don't feel like analyzing the rest of the match. If you really want a blow-by-blow account of the carnage, check out the official site. I will say that I think we had plenty of chances to turn the game on its head (especially in the first half), but we were utterly incapable of doing anything positive in the attacking third of the field, and that was our undoing.

T. Howard - Kept us in the game with some good saves early on, but was butterfingers on the first goal. No real chance to stop the other two. 5.5
T. Hibbert - Meh. Did alright I guess. 5
P. Jagielka - Constantly found himself out of position and his marking was well below standards. A huge misstep in his full return to the squad. 4
S. Distin - Not to reach for hyperbole here, but that was quite possibly the worst Distin has ever looked in a blue shirt. Polar opposite of Saturday. 3
L. Baines - Did his best to keep us moving forward despite a total lack of chemistry with Pienaar, and most of what we managed to create came off his left foot. 6
S. Coleman (Drenthe 62) - Over-matched. Jose Enrique had Coleman in his back pocket all night long. 4.5
J. Rodwell - Looked totally lost out there. Failing grades for both passing and ability to keep possession, not to mention the pair of chances he squandered. 3
M. Fellaini - Mediocre and mostly ineffective. 5
S. Pienaar - Work-rate was acceptable, but it was bad decision after bad decision with the ball. Out of sync with Baines all evening, which was worrying. 4.5
D. Stracqualursi (Osman 62) - Did his best to try to make things happen, but aside from one decent header there was no end product. 5
V. Anichebe (Jelavic 61) - Dreadful. I'll leave it at that. 3

N. Jelavic (substitute 61) - Didn't trouble the Liverpool defense in the slightest. Should have started with Stracqualursi, though. 4.5
R. Drenthe (substitute 62) - Had a go at his defenders, but was given no support. What little he managed to offer was too little, too late anyway. 5.5
L. Osman (substitute 62) - Struggled to make an impact. 5

Man of the Match: Leighton Baines 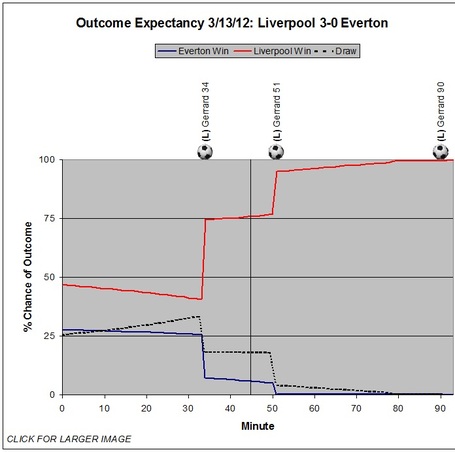