I've given up trying to figure out this team. I think it's bad for my health.

How exactly do you explain a team that loses to Queens Park Rangers, Stoke City, and Bolton Wanderers at home, but in the same season defeats Manchester City, Chelsea, and Tottenham at the same venue? Sure, every team has forgettable duds and memorable upsets in any given year, but this is taking it to the extreme. How do you even begin to view this anomaly? The half-empty folks will of course wonder what could have been had Everton only managed to beat the teams they were supposed to beat on a consistent basis, while the more optimistic fans will point to our record against the top teams and opine on our chances of joining their ranks next season.

Today it wasn't always pretty, and in stoppage time it was downright terrifying, but in the end Everton managed to take down another Champions League challenger at Goodison Park, emerging victorious over Spurs in a tense 1-0 affair. Read on for full analysis...

- The best story to come out of today (besides the three points of course) had to be the highly successful full debut of Nikica Jelavic. The Croatian scored his first goal for Everton when he got some impressive velocity on a side-footed one-timer, the pass being delivered by a rejuvenated Leon Osman. Spurs keeper Brad Friedel managed to get a hand on the shot, but he was unable to keep it out of the net as Jelavic celebrated joyfully. Jelavic also came very close to making it two when his curling free kick was just palmed aside by Friedel minutes later. He was understandably subbed in the second half, as he is still working his way back to full fitness.

- I was really surprised at how poor Tottenham looked today. Cartilage Free Captain's match report places much of the blame on Harry Redknapp's tactics, and I do have to say I found it strange that Luka Modric started this game on the wing. Still, their performance was really uninspired, and it was clear they were struggling for ideas as they tried to break down a stubborn Everton defense.

- Speaking of that defense, kudos to the entire back-line today, including Tim Howard. Spurs had precious few chances, the only legitimate scares coming in a frenetic stoppage time that feature five mysterious extra minutes and Louis Saha clanking a shot off the post. Where the referee found that much additional time I'll never know, and it nearly ended in disaster as Saha almost stole the headlines. When the ball hit the post it deflected off Howard and easily could have been redirected into the goal, but fortunately Everton were able to clear the danger.

- Everton didn't have a single corner in the entire match. Weird.

- While winning this game was awesome, I'm feeling greedy and really, really want to win these next two as well. Liverpool look stale at the moment and could be ripe for the taking, while the FA Cup game is one we should be favored in. As good as we're all feeling right now about Everton, I can only imagine what we could be feeling at this time next week.

- And I'd just like to say, for the record, that Everton's record when I write the match reports is 8 won, 4 drawn, 0 lost in all competitions. And now that I've stated the fact I'm sure I've jinxed it.

T. Howard - Made all the saves and I can remember only one frustrating punch that should have been caught. Keep it up and he'll earn that new contract. 7
P. Neville - Usually opted to take a safety-first approach, but no real complaints here. 6
J. Heitinga - One or two boneheaded passes nearly cost him, but his defending was otherwise rock-solid. 7.5
S. Distin - Fantastic. Personally, I can't remember a single mistake he made all day. 8.5
L. Baines - Played an intelligent game, working well with Coleman and picking his spots in which to attack. 7
S. Coleman (Jagielka 82) - Filling in for Spurs loanee Steven Pienaar and playing opposite his usual position of right wing, he impressively outclassed Gareth Bale. 7.5
L. Osman - As long as he's playing in the middle, he can be a dynamic player. Dictated play, especially in the early going, and collected the assist on Jelavic's goal. 7.5
M. Fellaini - Might have run more than anyone on either team, though his passing could still use improvement. 6.5
R. Drenthe (Rodwell 65) - Oddly, was one of the quieter players on the field today and didn't really contribute positively or negatively. 5.5
T. Cahill - Still not scoring, but did enough of the little things today to warrant a decent score. 6
N. Jelavic (Stracqualursi 78) - The finish was of course brilliant. Moreover, he showed a good first touch and worked hard until he tired in the second half. 7.5

J. Rodwell (substitute 65) - Returning from a nagging hamstring problem, he was a calm influence on the midfield. 6
D. Stracqualursi (substitute 78) - Found himself at the center of not one but two controversial plays in his short time on the pitch; he's interesting to watch if nothing else. 6
P. Jagielka (substitute 82) - I thought this was a wise substitution, as Everton needed all hands on deck to absorb the relentless pressure from Tottenham as they pushed for an equalizer. 6.5

Man of the Match: Sylvain Distin 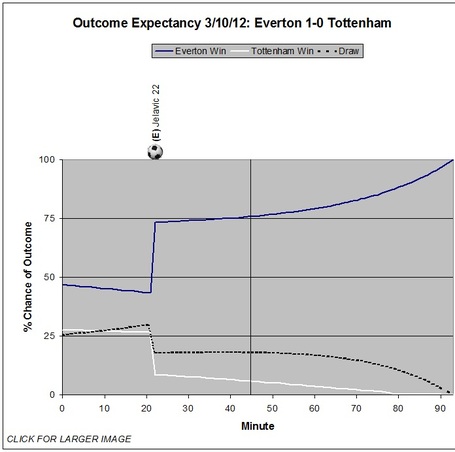