Well, isn't that just typical Everton. Defeat the league leaders in a pulsating encounter, struggle to draw the league bottom-feeders in a dreary affair. Honestly, maybe we should have seen this coming. The last few years have been characterized by surprising success when we least expect it and bitter disappointment whenever we dare to get our hopes up. I suppose it wasn't all bad today; it is a point away from home and yet another late goal to steal points for the Toffees. Still, this is Wigan. They are in last place. There were questionable performances by the players and questionable tactics by the manager, and overall it can't be denied that this is a setback.

- Let's start with the good. Steven Pienaar made his second Everton debut and was the best player on the pitch for either side in my book. His transition back into the left side of the midfield was seamless, and it really was if the clock had been turned back a year.

- The goal Wigan scored was so, so cruel... and yet, Tim Howard still needs to be held accountable for letting it in. Replays showed that Phil Neville's deflection was spinning wildly, and when the ball bounced right in front of Howard it reversed course and dribbled past the helpless American keeper. However, if Howard had been quicker to react I feel he still should have been able to punch the ball away. It was the smallest loss of concentration, but that was all it took to put Everton down 1-0. Some may argue that Howard had no chance because of the ball's change of direction, but I would bet that Tim would be the first to tell you he should have had that one.

- I like David Moyes. I think he's a great manager who generally gets the most out of what little is given to him to work with. However, his substitutions today did nothing but fuel the fire for his critics. While I had no issue with running out virtually the same lineup that defeated Manchester City earlier in the week, Moyes's decision to bring on the useless Neville for an injured Tim Cahill at halftime was utterly baffling. To me anyway, the painfully obvious move was to bring on Nikica Jelavic for his debut and pair him with Denis Stracqualursi at the top. Then, when Moyes did decide to send Jelavic into the game, he sacrificed the Stracq which again let us with a single striker. Yes, the introduction of Victor Anichebe paid off, but that move was pretty much automatic once Wigan took the lead.

- Wigan were poor as was to be expected, but I thought Roberto Martinez came armed with a decent game plan. Nearly every time Everton gained possession of the ball they were hounded and harried, and the pressure resulted in a very disjointed Everton attack. Aside from Pienaar, the midfield really struggled today to cope with the tight marking, and it resulted in a lack of quality opportunities in front of the Wigan goal.

- The most promising missed chances fell to Darron Gibson (who couldn't replicate his Tuesday heroics and ballooned his shot over the bar), Jelavic (whose idea to play a dummy for the onrushing Fellaini was interesting but ultimately not what was required), and Leighton Baines (who wasted a chance to win the game with a free kick that failed to dip over the wall).

- Finally, the breakthrough came when Anichebe nodded Baines's scintillating cross past Ali Al-Habsi's right-hand side for the equalizer. The initial corner by Baines was unsuccessful, but he was able to gather the clearance and provide some excellent service into the box. Anichebe's play since his return from injury has been encouraging, and he continues to show his value in his current role as a dangerous option off the bench.

T. Howard - Let in a howler, even considering the crazy spin the ball took. Good save in the first half on Di Santo though. 5
T. Hibbert (Anichebe 80) - Fine defending and did a decent job getting forward down the right flank. 6.5
J. Heitinga - Came uncomfortably close to handling in the box on a couple of occasions, but other than that he kept things uneventful. 6
S. Distin - A mixed bag; at times he looked rusty, but he also showed flashes of the powerful presence at the back we've come to expect. 6
L. Baines - His quality cross to set up Anichebe's goal should not go unnoticed; on the other hand, he often struggled to transition from defense into attack. 6.5
S. Pienaar - Like he never left. Very creative with the ball, and his forays into the attacking third accounted for the majority of our dangerous moves. 8
M. Fellaini - Threw himself about and was good in the air as usual, but like the rest of the team was stricken with the inability to put together a decent string of passes. 6
D. Gibson - Unimpressive. His game was mostly characterized by bad passing and a bad miss. 5
L. Donovan - Couldn't handle the tight defensive pressure from Wigan and struggled to move the ball. 5.5
T. Cahill (Neville 45) - Anonymous yet again, and picked up some kind of injury which forced him off at halftime. 4.5
D. Stracqualursi (Jelavic 59) - Not nearly as inspiring a performance as his effort on Tuesday, but worked hard and maybe was unlucky to be subbed off so early. 6

P. Neville (substitute 45) - The own goal was harsh, but it was still an overall drab second half for the captain. 4.5
N. Jelavic (substitute 59) - Would like to rank our new signing higher, but if we're being honest it was a rather poor debut. Way too early to judge the new boy though. 5
V. Anichebe (substitute 80) - Given ten minutes and change to work with, his challenge was to score a goal and he did just that. Can't ask for anything more from the Nigerian super-sub. 8 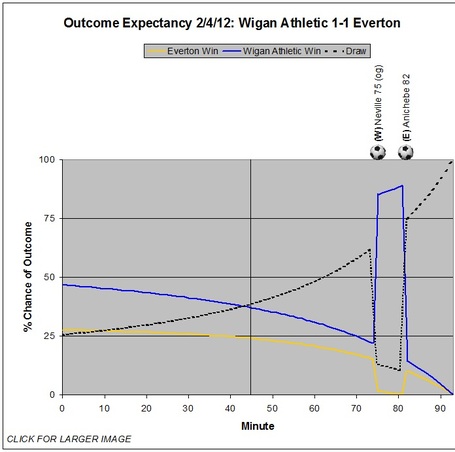