Though we watch football for the thrills of a tense, back-and-forth contest, sometimes a leisurely afternoon at the park is a nice change of pace. And when at the end of the day you find your team a win away from Wembley and three wins away from lifting the FA Cup... well, that makes things even nicer. Everton notched perhaps their most comfortable victory of the season on Saturday, ensuring their place in the hat for the sixth round. Sure, there were concerns about the lack of a killer instinct, and if Blackpool had converted a late penalty the last couple of minutes could have been overly interesting, but all in all it was a good day for the Toffees.

- All season long Everton have been especially futile offensively in the first half, but they reversed that trend in a big way against Blackpool. It was a novel experience to be up 2-0 inside of ten minutes, and it meant the rest of the match was basically stress-free. With several new faces in their starting eleven, it was no surprise that Blackpool looked unfettered and disorganized in the early going, and Everton took full advantage. The amount of space available for the midfielders to roam was criminal, so grabbing that early lead was huge.

- Landon Donovan unfortunately missed out on his going away party with illness, but along with Steven Pienaar being cup-tied it presented a terrific opportunity for Royston Drenthe, and the Dutchman didn't disappoint. He first made his presence known less than sixty seconds into the match with a beautiful curling effort into the corner of the goal, then spent the rest of the game terrorizing the visitors with a variety of mazy runs and eye-popping crosses. As always, Drenthe wasn't perfect and had his sloppy moments, but it might have been his best game in a blue shirt.

- With Donovan leaving, there's going to be an opening on the wing and Drenthe certainly made his case. A lineup with Drenthe on the right wing and Steven Pienaar on the left wing could be interesting, though Magaye Gueye also made a decent showing. Seamus Coleman returned to the squad as well, and Ross Barkley is waiting in the wings. It's good to have some options in any case.

- The rest of the match was just satisfactory, as Everton were unable to put the game to bed while Blackpool never seriously threatened to get back into the game. There were plenty of openings to snatch a third goal that went begging, and Marouane Fellaini was the main culprit. I have to admit that during some of the leaner times earlier this year I've called for David Moyes to play Fellaini in an advanced role, but while he created chances he was snake-bitten in front of goal.

- Honestly, I don't have a lot more to say about this game. There was a penalty for Blackpool that probably shouldn't have been called in stoppage time, but the spot kick was ballooned over the bar. It was a relatively easy win, although it could have turned out differently if Blackpool would have had a full-strength roster to work with. The real significance was of course the fact that Everton are further into the depths of the FA Cup than they have been since the fateful 2009 run to the final. Fans are starting to wonder if this just might be the Toffees' year, although the draw on Sunday will have a lot to do with the team's chances.

T. Howard - Actually called into action on a couple of occasions and made some very nice saves, especially his diving lunge to deny LuaLua. 7
T. Hibbert - If someone wanted to see the quintessential Tony Hibbert game, this was it. Unremarkable but mistake-free. 6
J. Heitinga - Can't really fault him for giving up a dubious penalty; otherwise fine. 6
S. Distin - Totally at ease all day long. He seems to bring a calmness to the defense that can go missing when he is absent. 7
L. Baines - Enterprising work at both ends of the pitch as usual. 7
M. Gueye (Coleman 56) - Involved in the first goal and generally had the motor running from the start. With Donovan gone, he could be asked to contribute more often. 6.5
D. Gibson (Barkley 81) - Perfectly adequate today. Paired surprisingly well with Neville to disrupt the flow of the opposition. 6.5
P. Neville - The rare game that actually suited him as a midfielder; did a fine job both defensively and keeping the ball moving toward the Blackpool half. 7.5
M. Fellaini - Could have easily had a hat trick on another day, so he must have been doing something right. Questionable finishing but still managed to leave his mark on the game. 6.5
R. Drenthe - Worked his socks off and was rewarded with a lovely goal and an all-around fantastic performance. A few blips in possession are all that bump him down a rating. 8
D. Stracqualursi (Vellios 87) - Another good showing overall. His goal was served on a platter, though he became stranded as a lone striker at times the rest of the way. 7

S. Coleman (substitute 56) - Great to see him back healthy; that was the important thing to take away from this appearance. 6
R. Barkley (substitute 81) - Just a cup of coffee, but he showed some skill. I wish Moyes would allow him more substantial minutes from time to time, even if it's just a half hour here and there. 6.5
A. Vellios (substitute 87) - Can't rate; not on long enough. N/A

Man of the Match: Royston Drenthe 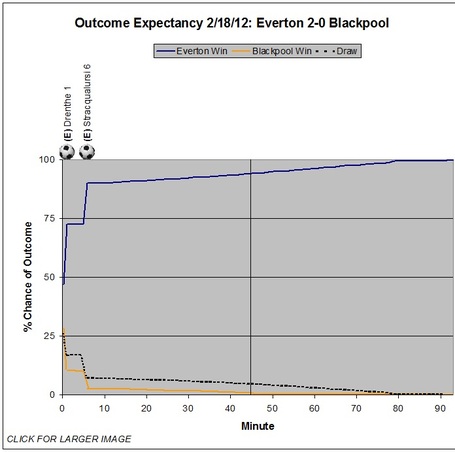