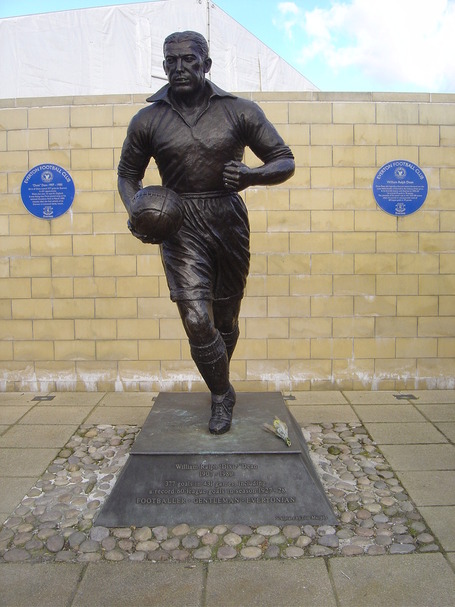 An Everton Classics section would not be complete without a look back at the club’s most famous centre forward. A player who casts a shadow on every number nine that has worn the royal blue shirt since and will continue to do so for as long as the club exists. I am, of course, talking about the legend that is William Ralph ‘Dixie’ Dean.

Born in Birkenhead on the other side of the River Mersey in 1907, Dean was a boy obsessed with football and - luckily for us – Everton, thanks to his Toffees supporting father, who watched the Blues during their 1914-1915 title winning campaign.

As he grew older it became clear he would be player of immense strength, meaning he could hold his own against tough, uncompromising defenders in an era where pretty much anything would go in terms of tackling.

He also possessed a fearsome shot and an arguably more fearsome header, with his strong neck muscles meaning he scored a third of his goals in the air.

He wasn’t just a big brute who bullied defenders though; he also possessed immense technical ability, meaning he was the perfect all-round footballer.

Some mystery surrounds his nickname Dixie – a name he never really took to, preferring Bill or Billy. Some say it was due to his jet black hair and dark complexion, meaning he resembled those from the southern US, while others also suggest it had its roots in his childhood nickname ‘Digsy'.

Either way Dean’s natural talents as well as his unerring dedication to the game – he even took on the night shift working as an apprentice fitter at the Wirral Railway yard to give himself time to play football during the day – meant he was destined for greatness.

He began playing at local side Pensby while still at the rail yard before being approached by Tranmere Rovers. Dean played for two seasons at Tranmere, with his 27 league goals in the second season attracting the interest of a number of clubs. There was, however, only one club on his mind:

"Oh, eight or nine teams [wanted me]. Newcastle wanted me. Arsenal wanted me. Anyway, one afternoon I cleared off to the pictures and when I got home my mother told me Mr McIntosh from Everton had been and was waiting for me at the Woodside Hotel. I ran the two and a half miles there. I couldn’t get there quick enough. Mr McIntosh asked me did I want to play for Everton, and that was that." (thanks to here for this quote)

Dean signed for Everton for a fee of £3,000 – a club record for Tranmere – but it was nearly all over before it began.

Dean suffered a broken jaw and fractured skull following a motorbike accident in north Wales in the summer of 1926. He had to have metal plates and pins inserted into his head to help the skull heal and he was told he would never play football again.

But, just 15 weeks later, Dean was back in the royal blue shirt (I told you this man was as hard as nails). The metal plates were eventually removed following his recovery, contrary to the myth that it was the plates that made him such a fearsome presence in the air.

Now back to his best he bagged 32 goals in 38 appearances in his first full season at the club. But it was his exploits during the 1927-28 campaign that he will be best remembered.

Dean hit a remarkable 60 goals in just 39 league appearances - a record that stands to this day. To make it all the more dramatic Dean needed seven from the final two games against Burnley and Arsenal. He hit four at Turf Moor in a 5-3 win meaning he needed a hat-trick on the final day of the season against the Gunners in order to beat Middlesbrough forward George Camsell's record of 59 league goals, set the season before.

But the visitors to an expectant Goodison Park were not going to rollover easily and even had the temerity to take the lead, only for Dean score twice to put Everton 2-1 in front at half-time. But Arsenal struck back and with five minutes left, the game locked at 2-2, it appeared Dixie would just miss out.

But, in the most dramatic of circumstances, Dean rose to meet Alec Troupe’s corner to send Goodison in raptures and write himself into the history books forever.

He would go on and score a remarkable 395 goals in 447 appearances for the Toffees, helping them win the Second Division title in 1931, the First Division in 1932 and the FA Cup in 1933 – the first time a player had won those three medals in consecutive years.

The ‘33 cup final against Manchester City was also where squad numbers were used for the first time, meaning Dixie became the first striker to wear the Everton number nine shirt. He scored appropriately enough in a comfortable 3-0 win and as Everton’s skipper he had the chance to lift the famous trophy aloft under the twin towers of Wembley.

He left Everton in 1938 – with the toils of the game finally catching up with him – to sign for Notts County, before ending his career with Irish side Sligo Rovers in 1939.

Though many scoff at the achievements of footballers and in particular goalscorers in the early days of football, and i admit the scorelines were a little bit more erratic in those days, it needs to be pointed out just how tough the game was. And I’m not just talking about the tackling, which bordered on assault at times. The old leather ball with rough, protruding stitching became rock hard when wet, making it difficult to kick let alone head. Pitches were mud baths, training conditions poor, there was little or no medical provision and the wages were so bad Dixie had to take up a job in the local abattoir soon after retiring. He rightly deserves to be considered as one of the game’s finest ever goalscorers.

He finally got the recognition he deserved with a testimonial in 1964, with a game against an England and Scotland select XI raising £100,000 for Everton’s greatest striker, ensuring a more comfortable retirement.

On March 1st 1980 William Ralph Dean died aged 73, from a heart attack, whilst watching his beloved Everton play against Liverpool at Goodison Park.

But despite his passing his legacy will live on and not just in the record books. In 2000 chairman Bill Kenwright led the way for a permanent memorial to be erected of Dean and in May 2001 a giant bronze statue was unveiled at Goodison Park, meaning his achievements will never be forgotten.

In case you wanted reminding of just how special those achievements were, here are some stats:

And if you still need convincing, how about this:

"There was nothing like silencing the Kop. When you stuck a goal in there, it all went quiet, apart from a bit of choice language aimed in your direction. Scoring there was a delight to me....I used to stick the ball in the net and bow three times to the Kop. They never liked me doing that."