Every so often in football, everything just seems to come together perfectly on the day, almost as if success has a certain inevitability about it. That's the feeling I got today, and it was a very different feeling from the City game, which always seemed like it was going to end in a draw (to me anyway). But watching the match today, Everton looked a hell of a lot like the team that was consistently finishing in the European places a few years back. Maybe it was just the fact that Steven Pienaar was back and working the left side of the midfield like a maestro, but today the Toffees offered something they haven't truly offered in a long, long time.

- This win was truly a team effort. So many players had strong games, and there was a terrific spirit in the squad today. At times the football was unexpectedly attractive and appealing, no more so than when Pienaar was dancing and swerving around various Chelsea defenders. But the South African wasn't the only player who was in rhythm today; Leighton Baines had a fantastic outing as well and was a constant source of pressure down the left flank. With Pienaar back, it makes Baines all the more dangerous, and it has been gratifying to see how quickly they have rekindled what was a wonderful partnership before Pienaar's move to Tottenham.

- Pienaar's goal, which was scored before five minutes had elapsed off the clock, was almost entirely an individual effort. First, he anticipated a careless Chelsea throw-in to head the ball forward, which ignited the attack. After a fortunate deflection created by Tim Cahill, Pienaar was the first to react and shot past Jose Bosingwa to take control of the ball and knock it past a stranded Petr Cech. Goodison erupted!

- I was impressed with how Everton handled going up 1-0 in the opening minutes. Elated though I was when Pienaar scored, I was slightly worried about how Everton would approach the game from such a favorable (and unfamiliar) position. Early leads have been few and far between this season, and it wouldn't have surprised me to see the team adopt an ultra-conservative stance. And while Everton did cling to their lead, I thought they were sensible about the way they handled the pressure and continued to try to attack when the chances presented themselves. Eventually, this approach would pay off with a second goal.

- Sometimes possession doesn't tell the full story, and today was one of those games. I've seen varying numbers, but every website agrees that Chelsea won the possession battle today. However, they in no way won the "quality" possession battle. When Everton had the ball they made the most of their opportunities. When Chelsea had the ball, they sent aimless crosses straight to Everton defenders. That, in a nutshell, was the difference in the match.

- In addition to Pienaar and Baines, the other contenders for Man of the Match for me were Marouane Fellaini and Denis Stracqualursi. Really, any of those four would have been fine choices, and each played an indispensable role in the victory. Fellaini was the calming influence in the middle of the park, always there to win back possession and clog up Chelsea's passing lanes. Stracqualursi was similarly impressive, scoring his first league goal and just being an ever-present pest in front of Cech. If you've ever been hiking on a hot day, he reminds me of the unmovable gnats that swarm around your sweaty face as you walk. His moniker of "Denis the Menace" suits him well, that's for sure.

- Unrelated to this match, but I wanted to say a quick word about the moron making headlines across the park. By refusing to shake Patrice Evra's hand today, Luis Suarez proved to me that he is a childish, pathetic excuse for a footballer who has clearly learned nothing from his suspension and accompanying scrutiny from the football community. What a disgrace. It's this kind of thing that makes me proud to be an Everton fan and not that other lot.

- Also, Louis Saha has already scored a brace and Tottenham is crushing Newcastle 5-0. It's looking like the Saha-Pienaar swap could go down as one of the better business deals for both sides before all is said and done.

T. Howard - Much improved, if not a tad under-worked. Dealt with balls into the box with more confidence and made a key save on Romelu Lukaku with a brave lunge. 6.5
S. Distin - Assured and mistake-free. Just what you want from your center-back. 8
J. Heitinga - I don't think he's had a subpar game since Phil Jagielka was injured. The unsung hero of this match and our season. 8
L. Baines - Some of his play with Pienaar was a joy to watch. He always seems to do well against Chelsea and that trend continued today. 8
P. Neville - In all honesty he didn't have a great game, but what everyone will remember is the thunderous tackle he put in on Ashley Cole to set up the second goal. Shades of his tackle on Ronaldo in 2008. 7
M. Fellaini - Was everywhere. The ground he covers is incredible; won numerous challenges today and bossed the middle of the field. 8.5
D. Gibson (Hibbert 87) - His anonymity is a bit worrying, but he at least managed to keep the calamitous passes to a minimum. 5.5
S. Pienaar (Drenthe 74) - Scored of course, but the entertainment value he presented was what I really appreciated. Picked up a knock that forced his early exit, but hopefully it isn't serious. 8.5
L. Donovan - Signed off from the Premier League (for this loan spell anyway) with one of his better games in a blue shirt. Terrific work to set up the second goal. 8
D. Stracqualursi (Duffy 90) - The legend grows. His goal wasn't exactly a thing of beauty, but his workrate (particularly in the second half) was what really stood out. 8
T. Cahill - Never a good sign when his biggest contributions were made on the defensive side of the ball, but give him credit for tracking back when necessary. 6 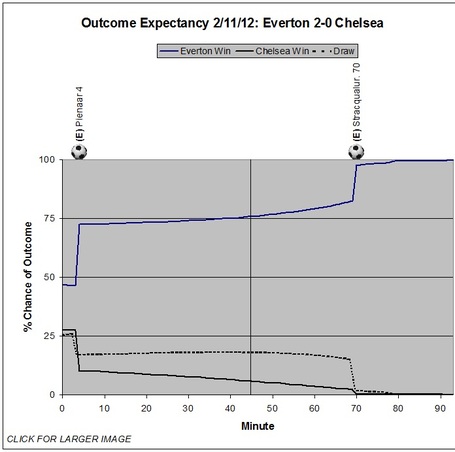