I'm just going to take a second to admire how terrific that scoreline looks.

All right. Let's do the match report...

- What a weird, wild, wonderful day it's been. I don't know about everyone else, but I woke up today with little hope of being able to acquire multiple impact players and (if it was possible) even less hope of taking three points from the match. Then news started to filter in throughout the morning and into the afternoon that Everton had secured the signing of Croatian striker Nikica Jelavic from Rangers for £5.5 million, as well as whispers about other possible targets that seemed to have some legitimacy. Suddenly, I was feeling optimistic about the game (irrational, I know), but it seemed the players were too because they were energized from the start.

- When the dust had settled on transfer deadline day, Louis Saha and Steven Pienaar had switched teams (Pienaar joining on loan until the end of the season). It's a good move for both sides. Saha provides cover for Tottenham now that Pavlyuchenko is off to Lokomotiv Moscow, and Pienaar gets to come home to the place where he experienced the most success in his career and start anew. Really, with our limited funds I couldn't have expected anything more.

- The match itself... overall, a terrific team effort. To be fair, Manchester City looked as bad as I've seen them this year, but taking and then protecting the one-goal lead was still a tremendous challenge that Everton met head-on. The defensive effort tonight was simply phenomenal; Tony Hibbert and John Heitinga in particular gave a world-class performance worthy of any team in the Champions League. Hibbert's output was all the more impressive given David Moyes's curious decision to start him out of position in place of the upstart Shane Duffy. Hibbert, of course, is much shorter than the typical center-back but City failed to use that to their advantage.

- The goal was produced from a very attractive buildup of passes, the likes of which hasn't been seen around Goodison Park in many a month. Darron Gibson completed the move with a sweet line-drive into the right side of the goal, helped along by a deflection from Gareth Barry that left the keeper flatfooted. However, so many others had a hand in producing the goal: Marouane Fellaini for his terrific tackle to win the ball initially, Royston Drenthe for a rare moment of quality to lose his marker, Leighton Baines for a dangerous cross into the box, and Landon Donovan for a smart decision to lay the ball off for the onrushing Gibson. Let's see more of that please!

- I really want to know the back-story of the dude who ran onto the field near the end of the first half and handcuffed himself to Joe Hart's goalpost. I've got to hand it to the guy, I've seen a lot of field invaders in my time, but that's one I've never seen before. Usually these guys just run amok for a few seconds before security tackles them, unless they're really unlucky and the taser comes out. Anyway, it was a highly effective form of protest (if that's what he was going for), seeing that the game was delayed for a good five minutes. Did anyone see how they freed him? Hilarious.

- Even though he didn't score, Denis Stracqualursi played extremely hard, and his effort did not go unnoticed by the Everton fans when he was taken off late in the match. He caused problems for Kompany and Lescott, and his touch looked much improved. If he keeps this up he might just become a cult hero for the club. Speaking of the fans, they were in fine form tonight and really got behind the team.

T. Howard - Dealt with everything sent his way with assurance and commanded the back-four like a general. 7
P. Neville - A typical steady performance from Neville. For the record, his "handball" was never a penalty. 6.5
T. Hibbert - Played out of position as a center-back, he more than held his own. Terrific work ethic. 8
J. Heitinga - Really, a heroic performance. Was a step ahead of Dzeko and Aguero all night long. 8.5
L. Baines - Contributed to the clean sheet with some desperate defending, but his overall composure probably wasn't at its best. 6
L. Donovan - Another assist, but gave possession away far too cheaply on too many occasions. 5.5
D. Gibson - Struggled mightily in the first half, but improved as the game went on and of course scored the goal (with a bit of help from Barry). 6.5
M. Fellaini - Threw in some crunching tackles, including winning the ball that started the move that led to the goal. 7
R. Drenthe (Baxter 77) - Total rubbish for the majority of the match, but came up big during the buildup to the goal. 6
T. Cahill - Mediocre at best. Didn't have the burst to get past City's defenders so resorted to flopping for free kicks. 5
D. Stracqualursi (Vellios 87) - Deserved every bit of the standing ovation he received from the crowd. Pestered the City defense all night long and was unlucky not to score in the opening minutes. 8

Man of the Match: John Heitinga 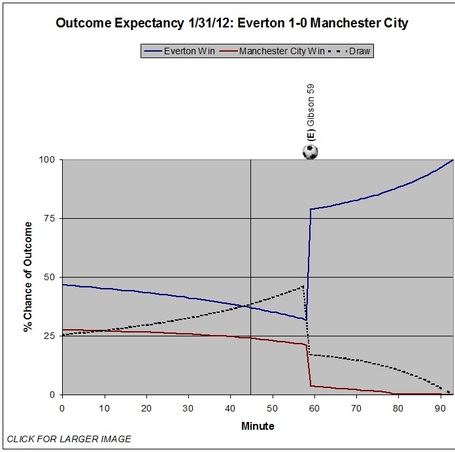