The injuries and suspensions seem to have finally caught up with the Toffees, as David Moyes was forced to field a hodgepodge lineup against one of the hottest teams in the league. In a plot that was eerily similar to the 2009 FA Cup Final, the home side started the game in dreamland but ran out of gas down the stretch as Chelsea came back to end Everton's home unbeaten streak.

- Evoking happy memories of Louis Saha scoring against Chelsea at Wembley, the Everton fans in attendance couldn't quite believe it when Everton opened this match in similar fashion. Steven Pienaar got the crowd's attention when he placed a perfectly weighted pass for Phil Jagielka to track down near the corner flag, and the right back's cross was in the perfect spot for Victor Anichebe to head goalwards. Petr Cech barely moved as the ball struck the post, but Pienaar was there to finish off the move he had started with a cool finish. Barely a minute had elapsed from the clock and Everton already lead 1-0... m-m-m-m-m-m-m-m-madness!

- It wasn't long before Everton hit the post again, but this time there was to be no rebound goal. Gary Cahill was deemed to have fouled Pienaar on the edge of the box (a dubious call in my book), but Nikica Jelavic showed no mercy as his free kick rattled the same post that Anichebe had struck moments before. A few more inches to the right and Everton would have been up 2-0 within the first ten minutes.

- The Toffees continued to attack with impunity, and they soon fashioned a third scoring opportunity. Pienaar was again the instigator as he pulled off a dexterous backheel, freeing Jagielka to find Leon Osman at the top of the goalmouth. Osman struck the ball sweetly, but his shot left Cech with just enough space to make a lunging save. You were starting to get the feeling that if Everton didn't double their advantage soon they were going to regret it.

- Gradually, Chelsea started to find their footing in the match, and some defensive confusion on Everton's behalf allowed the seas to part for Ramires to drive into the 18-yard box. The ball eventually found its way to Juan Mata, whose shot was saved instinctively by Tim Howard. The teams then traded chances, with a dangerous cross from Cesar Azpilicueta flashing across the face of goal before Jelavic just missed the target on the other end.

- The last bit of the half was a period of heavy domination for Chelsea, and they finally made their superiority in possession count when Frank Lampard cashed in on a quick and accurate cross from Ramires. The defense was simply too slow to react and Howard had no chance to make the save, leaving the score deadlocked at the halftime interval.

- As the match resumed, the big talking point was Ross Turnbull replacing Cech in goal for Chelsea, as the veteran keeper had presumably picked up an injury. But an ugly clash between Cahill and Leighton Baines soon grabbed the attention of the onlookers, with Baines coming away the worse for wear with a huge rip in the back of his shirt. I have to admit it looked pretty cool, but someone on the sidelines managed to dig up a spare kit for Bainesy, rather ruining the gladiator look he had going.

- Fernando Torres did not have a particularly strong showing as he returned to Merseyside, but he did threaten the goal on a few occasions. First, he combined with Mata to create a chance that had Everton fans covering their eyes, but he couldn't quite stay onside. Later on, Everton were slow to react to a loose ball and Torres pounced, lashing a hard shot that Howard did well to palm away.

- Jelavic couldn't believe his lack of luck when he struck the woodwork for a second time, as he flicked a fantastic cross from Baines past Turnbull and off of the crossbar. It was inch-perfect service from the defender and a commendable header from the striker, but perhaps this was a sign that it just wasn't going to be Everton's day.

- Despite the fact that the game was evenly matched for the most part, Chelsea continued to attack the weak spot in Everton's formation: the area just in front of the back four. Thomas Hitzlsperger did reasonably well when the team was in attack mode, but he struggled to provide Sylvain Distin and John Heitinga with extra support when needed. Eventually the pressure proved too much for Everton's defense to cope with, and though Mata's initial shot was saved by Howard, Lampard found the rebound and made no mistake with his finish. 2-1 to Chelsea... ugh.

- From there the game slowly fizzled out, and with one major exception Chelsea put on a clinic in how to kill off a one-goal lead (a lesson Everton could do well to learn, incidentally). The final chance for the Toffees came when Jelavic mishit one of his trademark one-touch efforts from pointblank range, further underscoring his lack of confidence at the moment. Thus, it was the first time since a match against Arsenal way back in March that Everton tasted defeat at Goodison Park.

Overall, I really don't have very many complaints about the tactics or the performance on Sunday. David Moyes was extremely limited in his options and I felt like he did the best he could with what he had to work with, and the same could be said of the players. It just seemed like Everton ran out of gas in the second half (particularly in the final fifteen minutes despite three substitutions in quick succession), and as Chelsea are clearly the deeper team it was always going to be a difficult game.

But like Mike and AMizener said in the GameThread, when Marouane Fellaini's suspension was announced we surely would have been satisfied taking six out of nine points in his absence. We know for sure that we'll have Fellaini back for the next match, and hopefully Darron Gibson and Kevin Mirallas won't be too far behind him. Don't panic, guys (and always know where your towel is). 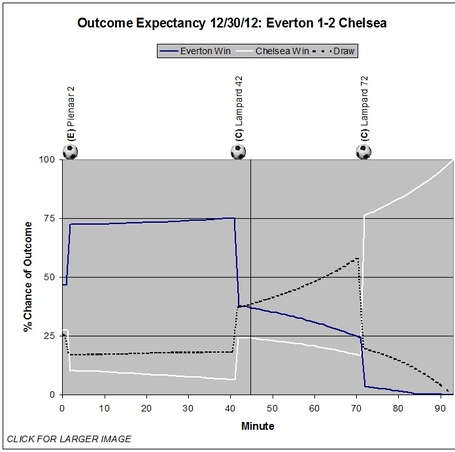