Back in 2004-2005 (the last season in which Everton finished in the top four), David Moyes's men specialized in the 1-0 win, and they rode that wave to a spot in the Champions League. Fast forward to 2012-2013, and this current outfit seems like they prefer to beat teams 2-1. Hey, whatever works.

- Ah, Boxing Day. Even though Christmas is over, it's always nice to know that we have a full day of football to look forward to the next day. A festive crowd packed Goodison Park for the traditional holiday fixture, and with the visitors currently holding down a spot in the relegation zone, hopes were high for a reasonably worry-free victory for the home team.

- The first half was predominantly a bland affair, though the opening minute seemed to indicate more exciting times were ahead. Everton managed to fashion a good look for Victor Anichebe within the opening twenty seconds, but the striker skewed his shot. Some nice passing and a positive sign to start the game, though.

- As the match progressed, everything was very stop-start and at times things got a little chippy, but Lee Mason's approach was in stark contrast to what we saw at West Ham. Several players (Anichebe in particular) might have been cautioned on another day, but in general Mason let both teams get on with it.

- Honestly, not much else happened for the rest of the half. Leighton Baines and Steven Pienaar played some pretty football as usual, but were unable to craft anything of substance. Darron Gibson showed his displeasure when he was whistled for a foul on the edge of the penalty area, but Shaun Maloney's free kick was saved comfortably enough by Tim Howard.

- Everton had a lot of corner kicks in this game, and near the end of the half there was actually a series of five in a row. From one of the earlier corners, Thomas Hitzlsperger (making his return to the starting lineup) delivered a tantalizing ball just begging to be headed into the net, but none of the Everton attackers could get on the end of the cross. Still, it seemed like only a matter of time before the Blues made one of their corner kicks count.

- There was bad news coming out of the break, as it was revealed that Gibson had picked up a knock and would not be able to continue. Steven Naismith was the substitute and did a solid job on the right wing, but the real benefit was that the change allowed Leon Osman to move to his preferred position in central midfield. David Moyes didn't seem too concerned over Gibson's injury (revealed to be a thigh strain) after the match, and noted that the move was also tactical in nature.

- Everton came out flying to start the second half. Nikica Jelavic was running his socks off and doing his best to get involved, but he wasn't finding much joy. Hitzlsperger came this close to scoring the goal of the season when he unleashed a vicious shot with wicked bend from 35 yards out, but the ball rang off the topside of the crossbar.

- When the Toffees finally did break through, it was largely thanks to a sizable stroke of luck. Anichebe deserves credit for winning the header that found Osman, whose shot took a heavy deflection off of Gary Caldwell and left Ali Al-Habsi completely wrong-footed. 1-0!

- Osman almost went from hero to goat in no time at all when he appeared to have tripped Maloney inside the penalty area, but as with most incidents in this game the referee chose to look the other way. Looking at the replay, I think Maloney had a pretty good case for a spot kick even if he did go down rather easily, and if it was an Everton player who went to ground we would all be howling at our misfortune.

- Let's take a quick break from the match report to play "How many ridiculous people can you spot in this picture?" 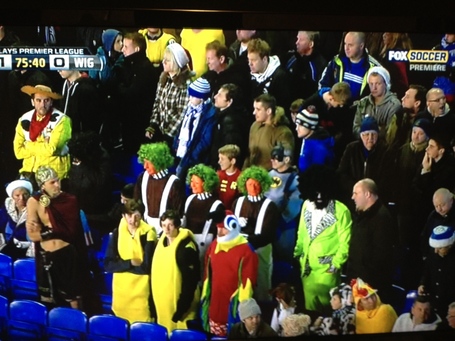 I see a cow, a chicken, two bananas, three Oompa-Loompas, Batman and Robin, a gladiator, and Woody the Sheriff. I'd say this shot sums up football fans in general pretty well, actually.

- Okay, back to the action. Phil Neville, thankfully playing at right back today, had a pretty nice five minute stretch when he saved a goal at one end of the pitch and set one up at the other. First he slid in to deny Arouna Kone's bid to tie the score, and then he managed to find Phil Jagielka for a powerful rising header that beat Al-Habsi to his left. The goal was the product of a short corner, as Wigan's lack of care around their goal line finally came back to bite them.

- It seemed like Everton would cruise the rest of the way to victory, but once again they managed to make things interesting. And it was such a stupid goal to give up, too. Franco Di Santo's shot was blocked, and with Kone competing with three Everton defenders for the rebound you would expect the Blues to clear the danger. But perhaps it was a case of too many cooks in the kitchen, as Kone managed to find the ball and poke it past Howard to make the score 2-1. It was a mystifying goal, one which caused Everton fans to ponder unanswerable questions such as "When will they keep their first clean sheet since September?" and "Why does Arouna Kone wear #2?"

- Thankfully, Wigan never really threatened to tie the game after that, and Everton were able to finish the job with minimal fuss. The whistle blew, "Grand Old Team" belted out across the ground, and all was well with the world.

(in order of appearance)

With Tottenham winning, Chelsea winning, West Brom winning, and Arsenal picking up a game in hand, this was one that Everton simply had to have. And though it wasn't always pretty, they managed to get the job done. Still, the performances with Marouane Fellaini out of the lineup haven't instilled as much confidence as the results would seem to indicate, and with a flying Chelsea team looming on Sunday we might need some more luck to pick up a result there.

But we've reached the halfway point of the season and we're currently tied for fourth place, so for now it's all good in Everton land. Those last few years of being in 13th at Christmas are starting to seem like a distant memory, aren't they? 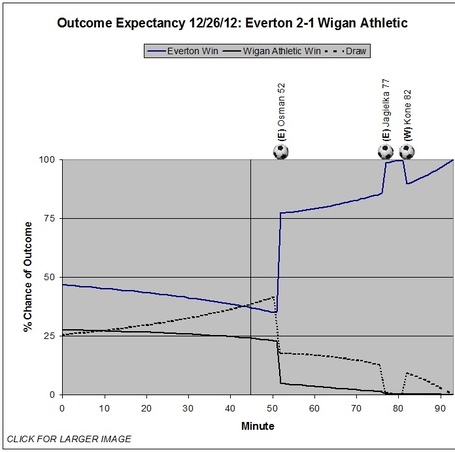