Really, was there every any doubt this match would end in a draw?

- Everyone always knew this match was going to be a physical struggle, but Everton did their best early on to get some of the attacking football going that they've featured throughout this season. A brilliant buildup freed Seamus Coleman down the right flank, who then played a square ball into the area for Nikica Jelavic to meet for a trademark one-touch finish. But a Stoke defender managed to get in the way, negating the chance.

- Everton definitely looked like the more likely team to score, but a lackadaisical moment while defending a corner kick provided an opening for Stoke to possibly nick a goal. Somehow the slew of Everton defenders left two players completely unmarked, allowing Jonathan Walters to setup Steven N'zonzi for a free header. Thankfully for the Blues, the shot was lacking pace and aimed directly at Tim Howard, who absorbed it gratefully.

- Then the Toffees almost created a goal from out of nothing, as Darron Gibson tried an ambitious shot that was deflected straight into the path of the onrushing Jelavic. The striker was unable to make solid contact with the ball, but Steven Naismith glided in and (apparently onside) managed to connect on a looping header that forced Ryan Shawcross into a headed goal line clearance.

- Then the Toffees did create a goal from out of nothing. Steven Pienaar sent in a hopeful cross that should be easily headed out of the box 99 times out of 100, but Shawcross mistimed his clearance and ended up delivering a perfect finish, beating his keeper Asmir Begovic cleanly. There's not much else to say really; just chalk it up as an early Christmas gift for Pienaar and the Toffees.

- Just a few minutes later, Leon Osman was gifted a glorious opportunity of his own but was ultimately unable to take it; the miss would end up being a key turning point in the match. Pienaar initiated the move down the left with a beautifully weighted pass to pick out Leighton Baines, who then played the ball back through a Marouane Fellaini dummy and into the path of Osman. The England international was overflowing with attractive options and probably had enough time to enjoy a cup of tea while he contemplated them, but Osman skewed his shot wide of the target. It should have effectively been game over at that point, but Stoke went into the break with renewed hope.

- Right off the bat, it was clear that Stoke had more energy coming out of the dressing room than they had shown earlier in the match. Glenn Whelan crafted the first chance of the half when he hooked up with Charlie Adam, who broke free of the defense to take on Howard. But the Liverpool reject was never able to get a clean shot away as Howard scrambled desperately to keep the ball out.

- Howard had been playing a very solid game up to this point, and he might even have worked his way into Man of the Match consideration if the scoreline had held. But the scoreline did not hold, and as it turned out it was one of those calamitous Howard mistakes that was to blame, moments that have become far too commonplace this season. In typical Stoke fashion, it was a simple long ball into the box that created the goal, as Kenywyne Jones managed to head the ball into the bottom corner of the goal. It really was not a terribly difficult stop to make for the athletic keeper, but for some reason (poor footwork? a bad angle? a mental meltdown?) Howard reacted too slowly to keep the ball out.

- Alright guys, I've got to go to work now so I'm going to wrap this up quickly. The match finished up 1-1 (surprise, surprise), but the other really controversial moment I need to mention was when Fellaini appeared to headbutt Shawcross during the buildup to a free kick later in the half. David Moyes has stated that Fellaini is completely to blame and deserves any punishment that he might receive, so it looks like we might be without the big Belgian for at least one game.

Even though we had to settle for yet another draw, this really wasn't a terrible result overall. Stoke City have a game plan and they don't bother to keep it a secret, but you know what? They're still here. Sure, your grandfather could probably play more attractive football on FIFA, but Tony Pulis has developed a formula to keep his team out of the relegation zone and has consistently proven that it works. Stoke still haven't lost at home yet this term, so it's really no shame that Everton could only manage a draw today. Take the point and move on, and hopefully beat the stuffing out of West Ham next weekend, who have been very Jekyll and Hyde since their return to the Premier League.

As for Zinedine Fellaini, well, I don't know what else to say other than it was stupid and he's probably going to miss some time. I will say that Ryan Shawcross is a notoriously scrappy player who was bumping and bruising Fellaini all afternoon, so it's not like this action was totally unprovoked. Still, what Fellaini did obviously has no place in football, and David Moyes said as much after the game. I still love you Fella. But sometimes you do not smart things. 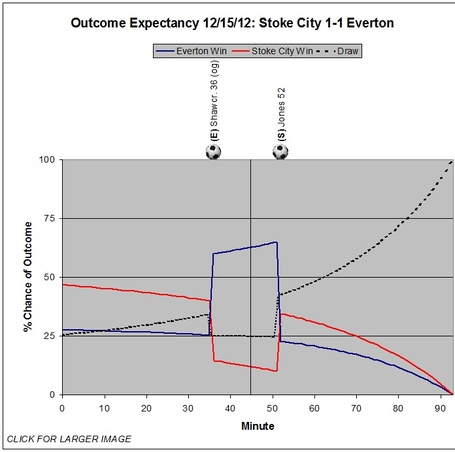