Everton v Spurs Tactical Anaysis: This Is New and I Like It

All the tactics that led up to the 88 seconds that changed Everton's world.

Share All sharing options for: Everton v Spurs Tactical Anaysis: This Is New and I Like It

There have been a number of games this year where tactics haven’t been the motivating factor. These pieces have become a bit of a broken record. Played pretty well, bad breaks, didn’t execute, blahblahblah, stay the course, blahblahblah. So it’s a delight for me to write one of these pieces where tactics weren’t the central story line, but in a good way. Sunday may have been the first game all year when a neutral observer could argue that Everton got more than they deserved given the rhythms of the game. That said, there are a couple of things to break down, starting with team selection and ending with the glorious 88 seconds that put Everton back in a top four spot.

This was the first time all year that Everton started their best offensive unit. Moyes definitely made the right choice selecting Coleman, as once again he and Mirallas combined electrically down the right side until Mirallas was forced (again!) to come off at the half. Mirallas’s really does change how the whole team operates. It’s pretty clear from the difference between the first and second half player influences that his presence helps everybody, even Baines and Pienaar all the way on the opposite flank get more involved. His speed and trickery sucks players in, and gives everybody else more space to work. That’s especially true when Coleman is supporting him, which means Mirallas is freed from the responsibility of providing width in the attack. Except for those 88 seconds, Everton’s best form was clearly in the first half. 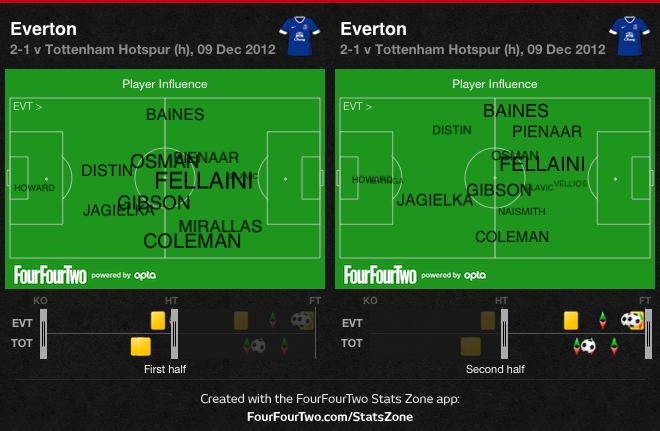 The right sided attack was so important because for most of the game both sides did a marvelous defensive job taking away the other’s offensive first options. On Everton’s left, Baines and Pienaar were largely able to nullify Aaron Lennon. He only played 17 passes (all of them short) and managed to pump in just 3 unsuccessful crosses. 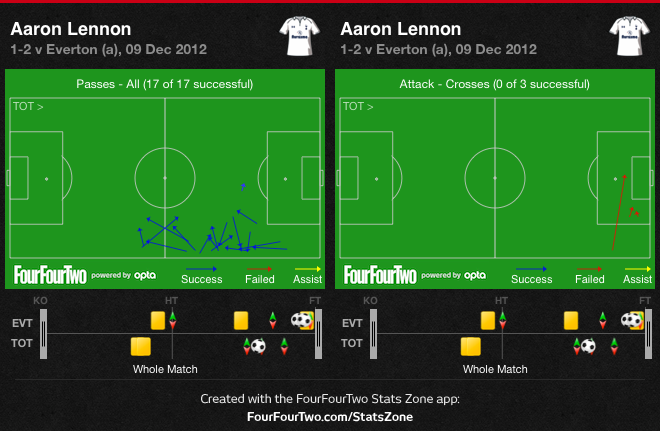 Lennon to his credit, worked hard defensively to minimize the Everton threat on that flank as well. While he has never been known as a particularly interested defender, that part of his game has grown leaps and bounds at Spurs this year, with their manager singling him out for praise on several occasions. It’s not an accident that Pienaar played a largely anonymous game for the first 89 minutes, and that his goal came after Lennon had been removed.

And in the midfield Spurs were the first team all year that seemed quite comfortable handling Fellaini. The big Belgian still received the ball 52 times, but only two of those receptions happened in the penalty area. They then closed down Fellaini’s passing options, and made him try to create with his feet. As we’ve seen in past years, pin point passing control is one of the few things Fellaini doesn’t do well, and consequently he finished with a decidedly mediocre 68% pass completion percentage, and only barely topped 50% on his passes in the final third (16/30) and forward passes (12/23). 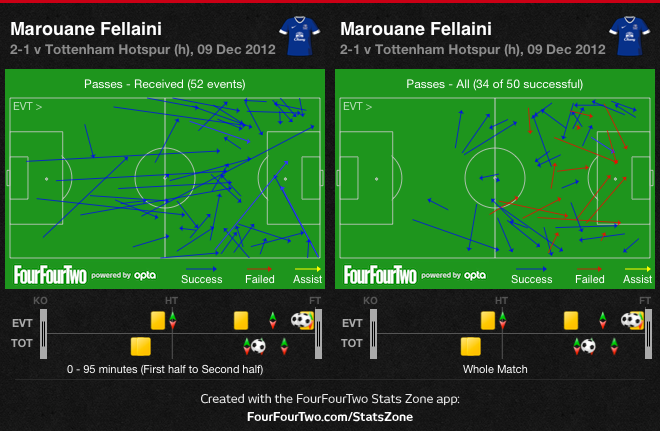 It will be interesting to see if other teams try to emulate this strategy in the future. Although I suspect that is easier said than done, as most other teams won’t have Sandro to unleash. Going up against the Brazilian destroyer may be the tallest task that Fellaini faces all year. So, I’m going to have to see some more evidence before I start to worry. Sandro is very very very good, and might have the best combination of athleticism, aggression, tackling technique and positioning acumen of any defensive midfielder playing in the EPL at the moment. I think we can give Marouane a pass on this one.

Sandro wasn’t the only defensive midfielder to play an awesome game though. Darron Gibson was flat out ridiculously good (again!). Defensively, he had two tackles and two interceptions, but even more importantly he completely shut Emmanuel Adebayor out of the game. Ade, who when playing alongside Defoe for Spurs, is generally tasked with the playmaking role, didn’t have a shot, and didn’t create a single chance. As you can see from where he received his passes, a lot of the time he was dropping into the midfield where he would be Gibson’s responsibility. But after all those touches he was just never able to turn and play a killer pass or find room to get a shot off. He completed 9/15 forward passes, but as the chart shows only one of them was even into the area. 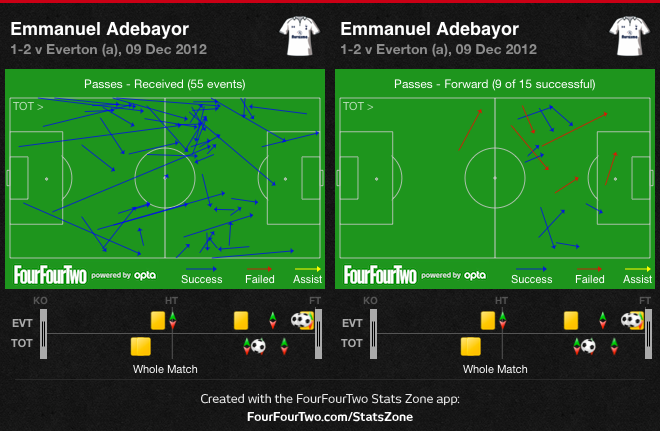 And offensively Gibson was equally as impressive. In what was largely a well-played but defensive game, Gibson’s passing stood out. His ability to distribute the ball all over the field is unparalleled on Everton’s roster. And at times, especially in the second half he seemed to be the only player keeping the offense ticking. And it’s not just the completion percentage. 92% is nice, but it’s a number that Phil Neville would put up as well. The difference is that over half of Gibson’s completions (25/48) went into the attacking third. He completed 11 of his 14 long attempts and only played the ball backwards a total of 10 times. The combination of aggressive passing and accuracy is a huge cog in Everton’s attack, and it's importance just can't be overstated. 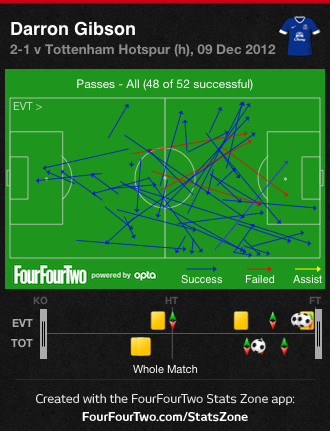 And now we get to the goals. The irony of the goals is that they came more or less against the run of play. If you look at the player influence from the 75-90 minutes you can see that the majority of the action took place with Vertonghen, Dempsey and Adebayor combating Coleman, Jagielka and Gibson on Everton’s half of the field (the only time Adebayor was at all involved in the game was when Everton brought Vellios on for Osman leaving only one central midfielder). And while Spurs for a spell actually looked more likely to get a second with sub Gylfi Siggurdson hitting a gorgeous curling striker square of the cross bar, those attacks left space in behind Vertonghen for Coleman to exploit. On the flip side, I’m not even sure who was supposed to be tracking Pienaar’s run. Spurs midfield positioning became quite muddled as AVB brought on Huddleston for Lennon, Siggurdson for Dembele and Falque for Defoe. While AVB was attempting to gain control of the midfield and retain possession and run out the clock, he left Spurs without a clear understanding of their defensive responsibilities and nobody tracked Pienaar. 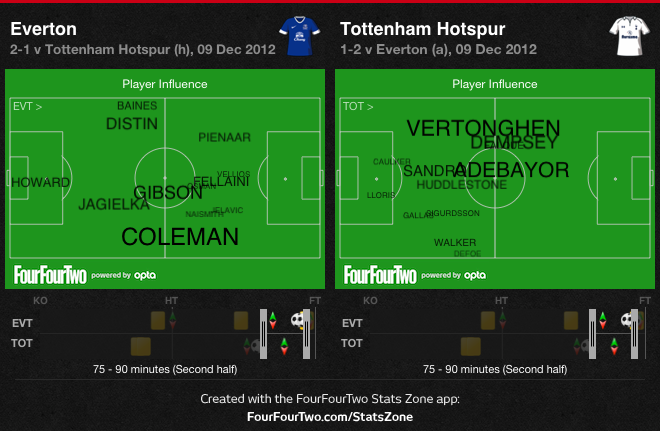 The second goal was a lot simpler, and eerily reminiscent of the late goal that Everton gave up to Newcastle earlier this year. Two big physical strikers get marked up one on one against defenders who are unable to handle them. It’s definitely a bit of kind luck that Vellios pass/shot/overhead prayer/whatever ended up in Jelavic’s path, but at the same time it’s a testament to Jelavic that he was sharp enough, and had enough energy left after 90 minutes to get on the end of it.

So there we have it. 88 seconds that were 90 minutes in the making. And in the course of a season it’s difficult to imagine a more important six point swing. Instead of our Champion’s League hopes being all but dead, six points adrift and sitting in 7th (but also tied for points with 8th place Swansea and 9th place Stoke), we’re now in 4th on goal differential, ahead of a Spurs team we just beat and an all of a sudden struggling West Brom on goal difference. Nice way to start off the holiday season.