In the span of two minutes, Everton went from ninth place (and a single point above our neighbors whom we've mocked all year) to a place in the top four. How did they do it? Actually, I'm not entirely sure but I do know that it was pretty freaking awesome.

A little something to enjoy while you peruse the match report:
<iframe width="560" height="315" src="http://www.youtube.com/embed/jDE0hYwc-A0" frameborder="0" allowfullscreen></iframe>
First Half

- The match started out as a lively affair but with little in the way of clear-cut chances. One of the many Belgians on display, Spurs midfielder Moussa Dembele, tried his luck from distance but saw his shot caught comfortably by Tim Howard. Everton then made some noise when Nikica Jelavic did well to stay onside, but Hugo Lloris timed his sliding tackle to perfection to block the ball out of play.

- Clint Dempsey emerged as the the focal point of Tottenham's attack, as Jermain Defoe was very quiet for the majority of the match. Dempsey took advantage of a rather naive bit of passing between Howard and Leon Osman to earn a free kick in an advantageous position, but Deuce's effort was lacking in velocity and failed to trouble the keeper.

- Everton were playing some quality football, with the disclaimer that they were finding it impossible to make anything happen in the final third. Kevin Mirallas broke free of the defense down the right and looked likely to pick out Jelavic who was well-positioned in front of goal, but the pass lacked accuracy and William Gallas was able to awkwardly clear the danger. Leighton Baines and Marouane Fellaini then played a crisp move that freed up some space for Osman in the box, but his shot was always curving in the wrong direction.

- Of course, we had to get in our weekly penalty shout as first Dempsey and then Gallas looked like they had surely handled the ball inside the box. However, the replays clearly showed that both players made contact with the ball in the shoulder/chest area. I have to admit, I'm getting a little tired of our fans bemoaning a penalty decision every single week. Sure, several of them have been warranted, but it seems like the string of questionable calls going against us has caused some fans to start seeing every decision through blue-tinted glasses.

- Osman had one more superb chance before the break, but his shot was blocked heroically by Steven Caulker. Lloris breathed a sigh of relief, as it would have been a very difficult save to pull off had Caulker not gotten in the way of the shot.

- The first half was effectively a stalemate between two evenly matched teams, and for most of the second half it was more of the same. A foolish foul committed by Sandro set up Baines to try his luck on a free kick, and after his initial shot was blocked the rebound found its way to Steven Naismith in front of goal. The substitute had replaced Mirallas who had gone off at halftime after possibly re-aggravating his hamstring problem, but Naismith couldn't react in time to direct the ball on target. A really terrific chance gone begging.

- Spurs were not without their own opportunities to take the lead, however. A shot by Sandro was deflected perilously wide of Howard's goal, and Jan Vertonghen unleashed a vicious rocket of a free kick that Howard did very well to push over the top of the crossbar. On the other end of the pitch, the ball kept finding its way to Osman for the best chances but he kept wasting them. First, he went reasonably close after the effective Baines-Pienaar combo teed him up on the edge of the penalty area, but the shot failed to hit the target. Later, yet another chance for Osman was saved by Lloris.

- With the result still hanging in the balance, disaster struck with fifteen minutes to go. It didn't seem like Dempsey posed much of a threat from where he took his shot and Sylvain Distin looked to have the situation under control, but when Dempsey's effort took the slightest of deflections off of the Everton defender it was enough to leave Howard stranded. The shot blooped agonizingly over the questionably positioned keeper, and just like that Spurs had a lead they probably didn't deserve.

- Gylfi Sigurdsson then nearly secured the points for Tottenham with minutes to go, but luckily for Everton his shot struck the woodwork.

- With time disappearing and Spurs parking the bus, hope was dwindling from Goodison Park at an alarming rate. But seconds before the ninety minutes were up, Steven Pienaar (who along with Baines had been excellent all day) managed to scrounge up a priceless equalizer. Full credit should go to another player who had a terrific game, Seamus Coleman, for a perfectly weighted cross that was placed in just the right spot for Pienaar to head past Lloris. It looked like Everton's run of draws was going to continue for another week.

- But there was to be one final twist in the tale, and for once it wasn't going to be Everton's opponents who would be the benefactors. Darron Gibson, receiving the ball on the right side from a throw-in, bent a dangerous cross into the box that found substitute Apostolos Vellios. Though I'm not convinced it was his intention, Vellios played an absolutely sublime bicycle pass for a streaking Jelavic, who stayed onside and guided the ball past Lloris for the winner. No words.

It might still be December, but the importance of this game cannot be overstated. As we've been alluding to throughout the week, the top half of the table is ridiculously tight right now. With everyone jockeying for position as the busy Christmas period approaches, beating the teams around you in the table is going to be invaluable, especially against teams like Tottenham. They might not have played particularly well today, but there is no doubt that Spurs have a very good side and are surely going to be right in the thick of the race at the end of the year.

Was today's game a season definer? We won't know until the end of the year, but the result sure beats the alternative. Since I'm finding it hard to find the words to adequately describe just how much this match meant to Everton and to their season, I think I'll leave you with another video clip:
<iframe width="560" height="315" src="http://www.youtube.com/embed/VDRrjFjJ9fI" frameborder="0" allowfullscreen></iframe>
I'd say that sums up this game pretty well. This works too: 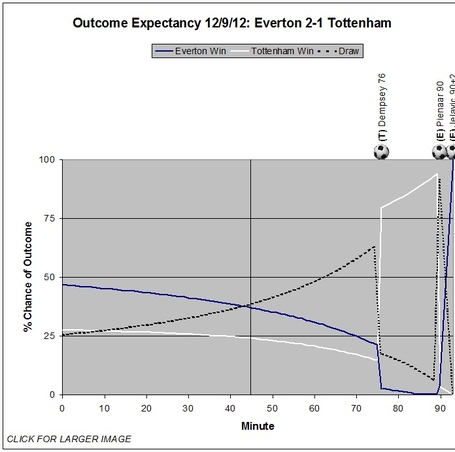