Seven draws in nine, huh? It doesn't seem to matter who the opponent is at this point; Everton have now recorded draws at both the defending champions and the bottom team in the league in that nine-game span. There should be absolutely no complaints today though, because even against a subpar City outfit this was a rugged game that required maximum effort to escape with a result.

- It was a little unsettling how thoroughly Everton controlled the first portion of the match, as you knew that City had the firepower to regain the upper hand at any moment. But the home side was slow and lackadaisical, allowing Everton to completely monopolize the possession. As always, goals were elusive though, with harmless dragged shots from Steven Naismith and Leon Osman all Everton had to show for their efforts.

- Tim Howard, much criticized in recent days for his indecision on crosses into the box, did well to catch the ball over a lurking Eden Dzeko. Howard struggled on a punch he should have caught a little later, but overall he commanded his area much better today.

- After twenty minutes or so, City started to stir from their slumber and managed to see a bit of the ball. Steven Pienaar was called for an iffy foul on Maicon, resulting in a free kick for David Silva that pinballed dangerously in front of Howard before going out harmlessly for a goal kick. Carlos Tevez then played an intelligent cutback in search of Samir Nasri, but Dzeko's face got in the way of the Frenchman's shot.

- But Everton continued to look like the better side, culminating in an attack down the left initiated by the excellent (and apparently healthy) Leighton Baines. A perfect cross from Baines found a poorly marked Marouane Fellaini at the back post, Joe Hart managed to deny Fellaini's powerful header, but Fellaini found the rebound and gently directed it off his thigh and over the line. Pablo Zabaleta was to blame for losing track of his man, but there was no doubt that Everton deserved to be ahead.

- Falling behind seemed to finally awaken the Citizens, and they nearly leveled the score when a well-placed header from Tevez was saved by a diving Howard. Then City were handed a lifeline, as Fellaini was deemed to have wrestled Dzeko down inside the penalty area, though an argument could be made that the opposite was true. Was it a penalty? David Moyes certainly didn't think so, but it was tough to say; removing all bias I think I might just have given it. Tevez wasn't worried about such trivial matters and he stepped up and sent the ball right down the middle of the goal, knotting the score at 1-1 going into the break.

- As expected, the second half was much kinder to City, as they increased the tempo in search of a winner. Everton adopted a more cautious approach, preferring to solidify the defense and counterattack when given the chance. Tevez still looked like the biggest threat to the Blues, as he saw one effort blocked by Sylvain Distin and headed another far too high to challenge Howard.

- Maicon then put his attacking ability on display, galloping into the penalty area much like the runs we've grown accustomed to seeing from Baines. The finish was lacking placement though, and Howard was able to stop the shot with minimal fuss.

- City continued to do their best Everton impression, passing the ball neatly around the fringes of the danger area but without finding that elusive breakthrough. Silva and Dzeko finally managed to breach the defense and appeared certain to score, but Pienaar was in the right place to clear the ball to safety.

- The last real chance to win the match went to Everton, thanks to some brilliant work by Pienaar who had the vision to spot the largely frustrated Nikica Jelavic on a counterattack. Jelavic was flattened by Zabaleta, setting up a free kick from a great position for the Toffees. However, Baines did not take the kick as usual, allowing Jelavic the opportunity to finish what he had earned. He nearly did just that as his low, dipping shot was saved awkwardly by Hart. Nothing came of the resulting corner kick, and the match ended with the points shared.

This was a very strong performance overall, but in my opinion the key to the game was the central midfield duo of Leon Osman and Darron Gibson. Considering the big names they were going up against, I was extremely impressed with how they were able to effectively shut down the likes of Yaya Toure, Samir Nasri, and the rest. Really, it was a tossup for me between Osman and Gibson for Man of the Match, but Osman just edged it for me for the sheer physical punishment he put himself through today. Hats off, Ossie.

Another huge game at home to Spurs is up next. The top half of the table is getting alarmingly crowded, and if Everton don't start winning soon they face the real possibility of being overtaken by teams such as Stoke City and West Ham. Knowing us, we'll probably draw again. 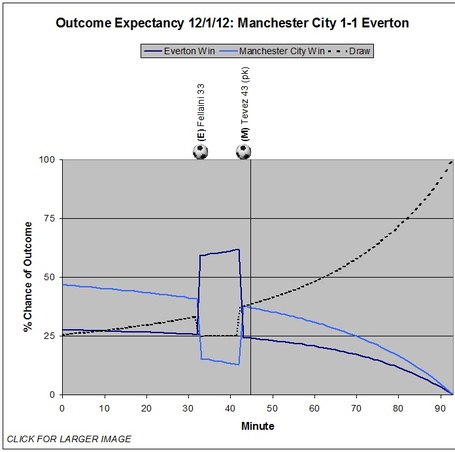