A late mistake by Seamus Coleman overshadowed what had been a great game for both him and the team.

It’s amazing how goals change story lines. Until the 90th minute I thought the story of the game was Seamus Coleman. He terrorized the left side of Fulham’s defense, getting John Arne Riise booked and then subbed, forcing Martin Jol to rotate 3 different players into the right back slot to try and slow him down. He set Mirallas free to cross for Fellaini’s first goal. And, at the same time, he didn’t get himself out of position defensively. Fulham were never able to exploit the space in behind him. So of course he gives the ball away, fails to properly mark Steve Sidwell at the back post, and becomes doubly responsible for Fulham’s last minute draw. Sigh. That’s the learning curve with a young defender I suppose. So now before I get to some of the new offensive wrinkles from this week I need to spend a couple of paragraphs talking about end of game situations.

Here’s my question. Why was he still on the field? With 15 minutes to go Moyes needs to decide what the best way to protect his lead is. There are basically two choices. One, drop off and defend and make Fulham break you down, or two try and keep the ball and kill off the game. With Everton’s personnel they are both viable options. Moyes decided to pack it in defensively. You don’t take off Jelavic and bring in Distin if you want to play the possession game down the stretch. That’s fine, but if you’re going to do that, then the smart play is also to bring in Hibbert. He’s the better defender, has more experience, and is rock solid under pressure. Instead of bringing on Naismith for Mirallas, slot Hibbert in at right back and push Coleman up. It’s just the better play.

Now, my personal preference is not to sit back. I think Everton have the skill players to kill of a game by maintaining possession and building slowly. But, if that’s the case, you can’t take Mirallas off for Naismith, instead that’s when you take Jelavic off. You keep as many players who are comfortable in possession and can drop deep to receive passes on the field as you can. If Mirallas can’t play the full 90, that’s fine, but then you can’t play to kill off the game with possession. The problem was Moyes got caught in-between. The right side of his team, with Coleman and Naismith wanted to keep playing, and everybody else wanted to sit back and invite pressure. You can’t have it both ways, that’s when you concede goals.

Ok, enough of that, now onto the good and interesting stuff. Other than that second goal Everton played spectacularly this weekend. It may have been their best game of the season when you consider that Fulham is currently sitting seventh and has scored the second most goals in the EPL. The Toffees were sound defensively (Heitinga had by far his best game of the season) and offensively they were just sublime. Everton, in fact, executed two completely separate offensive game plans, one in each half. Looking at their short passing statistics you broken down by half you might assume they were two different teams entirely. 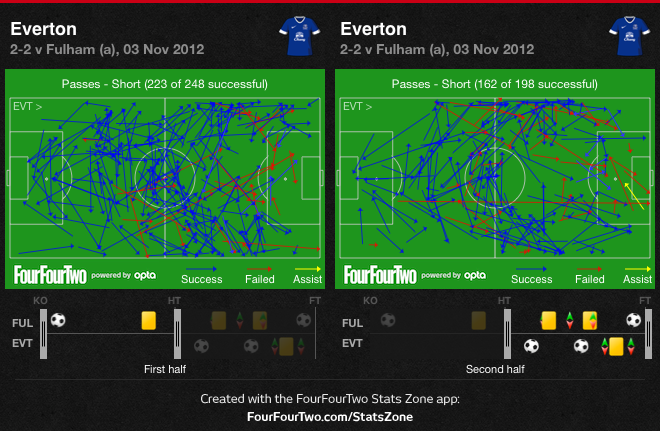 The second half was more or less what you’d expect from the team this year. But in the first half they focused a lot more on playing the ball forward on the ground, and in fact completed 60 more short passes than they did after the break. Fulham’s back line is pretty good in the air, and their midfield didn’t contest possession, instead dropping deep without the ball. Look how deep Diarra, and especially Baird sat. 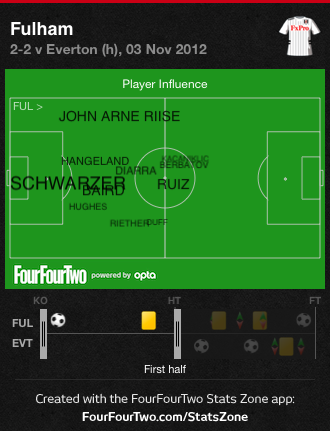 That positioning is directly intended to take away the long ball to Fellaini, especially since they already had a one goal lead and could afford to sit back. And rather than force the issue Everton played out of the back along the ground. Now, it’s been well publicized (meaning that I’ve endlessly complained about it) this season that the team has huge creative problems in the middle of the field. Moyes has tried a few different ways to get around that problem. This week he broke out a new plan. Mirallas and Pienaar switched wings, and both of them stayed exceptionally wide. Looking at Mirallas you can see that when he plays on the right side he is usually tucked slightly in, which gives room for Coleman to overlap, but on the left he basically hugged the sideline. 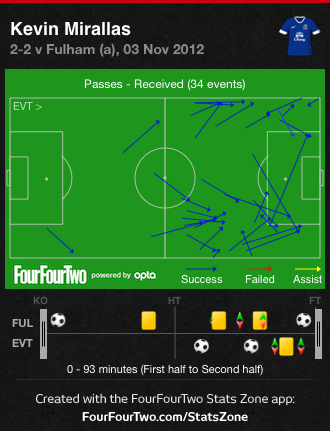 The whole point was to open up the center of the field, and create pockets of space for the defenders to advance into. Sometimes it was Coleman and Baines cutting inside, but frequently they stayed wide as well forcing Fulham’s wingers to stick with them, which meant that it was actually Jagielka and Heitinga who were given the freedom and responsibility to move into the offensive half and initiate the attack. Here’s the difference between Jagielka’s passes played this week and last week against Liverpool. 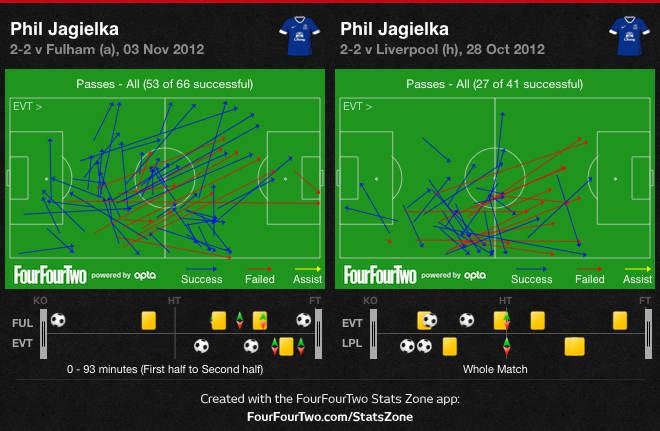 And if we break down this week by halves it’s clear that most of the difference occurred in the first half. Specifically look at the cluster of short passes around the middle of the field. Another way to see the difference in intent is if we look at Tim Howard’s distribution. Nothing is a clearer indication of what the manager wants (and what the defense is conceding) then where the keeper puts the ball when he isn’t being pressured. And the difference between the first and second halves is night and day. 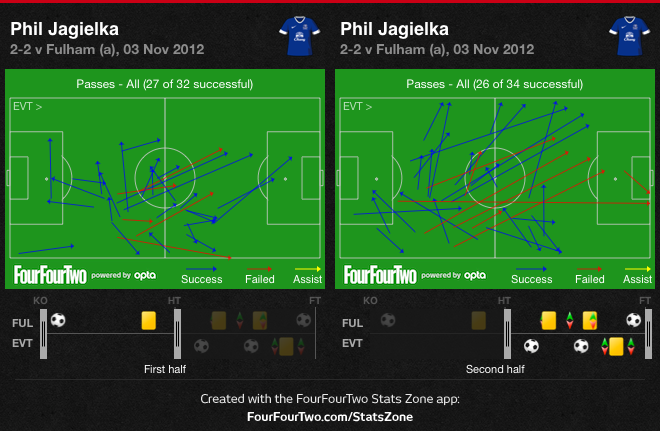 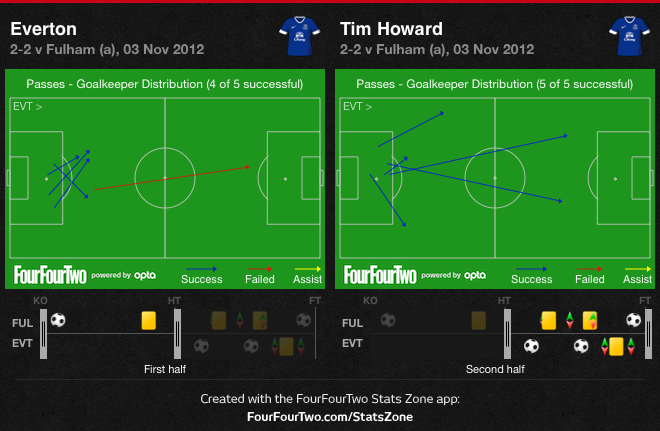 While Everton didn’t score in the first half, they were certainly the more threatening side, and they made Fulham come out of their shell more. That in turn meant in the second half they could switch back to their normal style and Fellaini had more room to work. Both goals then came in typical Everton fashion. The first on an in to out run by Mirallas into space created by Coleman torturing defenders, and then a smart cross back to Fellaini. And the second goal of course came on a direct long ball from Jagielka to Fellaini. But those don’t goals don’t happen that way if Everton didn’t force Fulham to change their defensive gameplan.

Overall only 10% of Everton’s passes on the day were long passes, which is a decline from their norm of 13%. That might not seem like a lot, but the fact is that even a team famous for them, like Stoke, only plays long balls 16% of the time, so 13% to 10% is a big difference. And that change didn’t impact Everton’s ability to threaten Fulham. Roughly 38.5% of Everton’s passes were played in the attacking third, that’s the same number as against Liverpool last week. All of those are very good signs for this team going forward.

Of course, having said all that, they still only managed a single point. Again. But, despite dropping what looked like two sure points, they remain tied for 4th place. Again. The fact is that outside of Manchester United, Chelsea and Manchester City nobody is that good. So, on the one hand these dropped points haven’t really pushed the team down the table, but on the other hand they may end up keeping the Toffees from capitalizing on what looks like an increasingly realistic chance to finish in that 4th Champion’s League spot. All of which leaves me feeling the same way I did last week. They need to win some of these games because I’m running out of ways to write this same last paragraph over and over again.