Against Norwich it was the last minute, against Arsenal it was the first. Everton remain tantalizingly close to putting together an entire good game, but just can't quite get there. And that may cost them a run at a Champion's League spot.

Once again Everton score a goal, hold their opposition scoreless for 89 minutes and walk away with a 1-1 draw. Just another ho hum game where we were the better side, created more chances, had a legitimate penalty claim and still only put one in the back of the net. Sigh. And while 6th place isn’t the end of the world when you are only 4 points adrift of third, it remains painful to think of what might have been, especially with games against Manchester City and Tottenham, up next. Still there are a couple of things to talk about after this performance. Most notably, Darron Gibson and Tony Hibbert returned to the side after prolonged absences. So, let’s break down how their inclusion shaped Everton’s play.

We’ll start with Gibson. Everton have missed him terribly. I’ll come to his offense in a minute, but his defensive contributions are equally if not more important. The best way to understand his defensive presence is that Santi Cazorla, Arsenal’s little Spaniard play making wizard, didn’t impact the game at all. He didn’t create a single chance, he only took 3 shots (of which only one required a Howard save), and overall he seemed an afterthought, despite the fact that Arsenal had 54% of the possession. In general Gibson’s positioning in front of the central defenders makes their lives infinitely easier, and if he remains healthy it will go a long way towards easing the team’s defensive woes. Offensively Gibson’s range of passing is just infinitely better than Phil Neville’s. It’s not that he completes more passes, or even passes the ball forward more, it’s just that he is better able to consider a range of options and choose the best one, while Neville just turns to his right and passes to the full back every damn time.

Gibson’s return is obviously a net positive, but Hibbert’s is a little more complicated. We all know what he does well. He’s the definition of solid in defense. The tackling numbers charted below don’t lie. And unquestionably he was a big part of the reason that for most of the game Arsenal didn’t look particularly threatening. 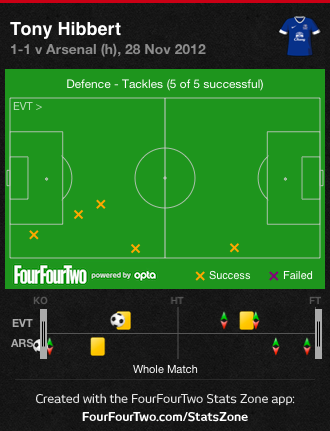 All that defensive stability, however, comes with a cost. His conservative nature really hobbles the right side of Everton’s attack. He’s not an accurate passer (or crosser) and while he is a willing runner, his overlaps often develop late as he waits until he is sure the team is secure in possession, and he doesn’t have great pace. With him on the field the play, as it has frequently in the past, slants heavily to the left. 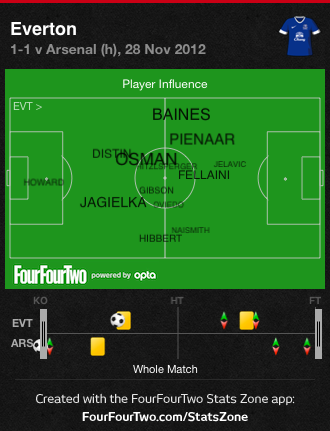 Now, there isn’t inherently anything wrong with that. Everton’s more balanced offensive attack this year has clearly cost them defensive stability, and there’s a real argument to be made that on balance the team will be better served by just focusing on the left flank, and using the right side of the field only when team’s over-adjust against them. But, part of what that means is that the right wing position becomes a really thankless place to play.

Because of his lack of pace, Hibbert doesn’t command the field end to end, he can’t. That means that the winger in front of him has less positional flexibility. For example we can look at Steven Naismith’s passes received against Reading, when he was fairly influential and scored a goal, and against Arsenal where he was completely anonymous. 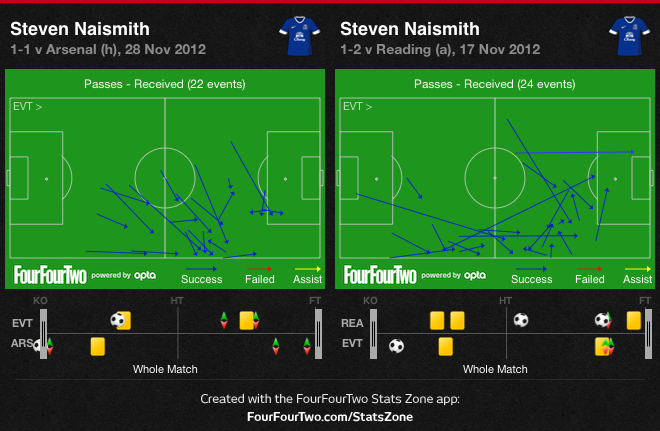 An aggressive fullback will get up the field faster, and be able to provide an outlet for a reverse ball, contributing width to the attack. Hibbert, however, doesn’t serve that function meaning the winger has to stay wide and make himself available that way. Instead of being a part of the buildup his main role becomes spacing the field so that others can attack. It’s telling that Oviedo was also a non-factor when he came in for Naismith. No matter who plays that role they just won’t see as many touches.

Again, that’s not necessarily a bad thing. My concern is that when Mirallas comes back, if he is playing in front of Hibbert his usefulness will be curtailed. It will be much easier for defenders to deal with him, without Coleman in an elevated position playing short passes with him and making aggressive overlaps. Naismith can play a role that calls for him to be largely anonymous and occasionally sneak into dangerous positions. He did it twice against Arsenal early in the second half, almost getting on the end of a Jelavic cross after having come all the way across the field in the box and sneaking near post. It doesn’t feel like playing him there is a waste of his talents. Basically what I’m saying is that because Naismith isn’t as good as Mirallas, it’s not as big a deal if he’s asked to play a role where he doesn’t see much of the ball. I worry that playing Mirallas in front of Hibbert will sap a lot of his offensive energy and freedom.

Still, Moyes has a way of ironing out these little tactical wrinkles and getting the most out of his player combinations. And it’s always better to have more tactical options than less. Plus, we don’t know when Coleman will be returning to the side anyway, since he’s out with a mysterious undefined injury that has kept him from even making the bench the past two games (there’s some chance I suppose that it’s only an "injury" and Moyes has just decided he isn’t developing defensively at an acceptable speed). I’m excited to see what Moyes has in store, although if recent past as any indication it’s sure to end in a draw.