During the past week, much of the talk on Merseyside has concerned Steven Gerrard's critique of Everton as a long ball side "similar to Stoke City." Well, Everton Stoke City-ed their way to the lead today, but unfortunately they then Southampton-ed their way to yet another draw as the match at Craven Cottage ended with the honors even.

- Everton managed a few chances that weren't really chances early on in the match, as Leon Osman was blocked a couple of times and Nikica Jelavic played a nice dummy for Steven Pienaar that was ultimately blocked as well. With the Blues applying the pressure and looking lively, the response from Fulham came as an unexpected kick to the groin. On their first real foray into an attacking area, Phil Neville tripped up Dimitar Berbatov to set up a free kick from the top of the penalty area. Bryan Ruiz curled his shot off the post, off a diving Tim Howard, and over the line for the opening tally. It would ultimately go down as an own goal credited to the unlucky Everton keeper.

- Despite a plethora of corner kicks to work with, Everton were having a difficult time generating anything from their many crosses into the box. Controlling the majority of the possession was also doing little to bring the Blues any joy. Jelavic popped up a header that was never going to worry Mark Schwarzer, and later Osman tried his luck from distance but saw his shot easily caught.

- For some reason, David Moyes chose to switch his wingers midway through the first half, moving Steven Pienaar to the right side and restoring Kevin Mirallas to the left. This was an odd move; the only reason I can think of is that perhaps Moyes decided that Mirallas, coming off an ankle injury, would be better off in the position he has historically been most comfortable. In any case, it seemed to leave Everton just a tad disjointed, and later Moyes would reverse the tactical move.

- Leighton Baines whipped a picturesque cross for an unmarked Jelavic to meet, but the Croatian was wasteful as he headed the ball straight into the ground. Jelavic looked like he was lacking in confidence today, and though he worked his way into some good scoring positions his finishing left a lot to be desired.

- The half closed with Everton well in front of their hosts, but they still couldn't find the end reward they were seeking. Seamus Coleman weaved his way into a dangerous spot and fired low and on target, but Schwarzer saved the shot with Jelavic lurking nearby. Phil Jagielka hit a long, low drive that nicked a Fulham player and whizzed just left of the goalmouth. Finally, Jelavic was gift-wrapped what might have been the best chance of the entire half right at the end as Chris Baird inadvertently weighted a perfect pass for the striker. Unfortunately, Jelavic was unable to finish from what was admittedly a difficult angle, chipping his shot well wide of the mark.

- Thankfully for the Toffees, the second half got off to a much better start than the first, as it was the two Belgians who connected to score Everton's first goal. The move began with a superb run by Mirallas, and the move ended when Fellaini directed a neat pass from his countryman past Fulham's Australian keeper to even the score.

- Fulham nearly struck back right away as Berbatov did what he does best, squeezing past the defense and (staying onside) let fly a cheeky effort that required all of Howard's reflexes to keep out of the net. The game was becoming a chippy affair, and Mahamadou Diarra was finally shown the yellow card he had coming for a nasty challenge on Mirallas.

- Everton were on the front foot and the go-ahead goal was seeming more and more like an eventuality. Indeed, Fellaini would make it a brace through a very Stoke City-ish buildup. First, Jagielka bombed the ball the length of the pitch for Fellaini to bring down dexterously at his feet. Then, the big Belgian turned swiftly and hammered the ball past a diving Schwarzer and into the net. 2-1!

- Unfortunately, even a five-man defensive unit (after the introduction of Sylvain Distin) could not secure three points for the Toffees for the first time since September. With the last few minutes ticking away, Coleman made an unwise decision to try to blow through three or four white shirts and of course lost possession. Fulham immediately moved the ball to the right and then crossed into the area, the pass evading at least four Everton defenders who should have cleared it before finding Steve Sidwell at the back post. The ball was scrambled over the line, that was that, and the game ended in a disappointing 2-2 draw. 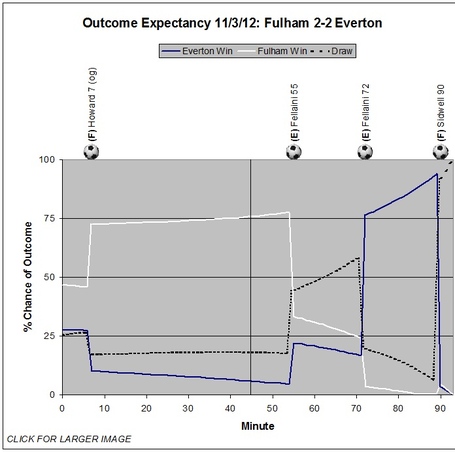