Everton v Norwich Tactical Analysis: What Else is New

Once again Everton squandered the lead late. For 89 minuted Everton looked to be in line for a solid if unspectacular win. Then like it has far too often this year it all fell apart.

Share All sharing options for: Everton v Norwich Tactical Analysis: What Else is New

These things are getting harder to write. It’s not so much that Everton keeps dropping points, at some point over the years I’ve gotten used to that. It’s the fact that their results are now consistently not matching their level of their play. They’ve conceded enough late goals, and failed to put away enough games that it’s impossible to write off those occurrences as fluky, but at the same time, each week there seem to be different culprits and causes. And on top of all that, there still are genuinely positive developments taking place on the field. I guess that’s what happens when you have 89 minutes of a hard fought 1-0 win ruined by a 90th minute equalizer. Still it feels somehow dirty talking about all the good stuff when you walk away from the game that disappointed. Nevertheless, there are a couple of things I think are worth highlighting.

First, we need to talk about the formation. Without Fellaini Moyes once again moved to something of a 4-3-3/4-2-3-1 hybrid with Pienaar deployed in the center of the pitch. Whereas against QPR Mirallas and Anichebe were the wingers, with both of them out injured, Naismith and Oviedo filled those roles. As you can see below, both of the wingers drifted centrally and looked to combine with Pienaar. That’s different than at QPR where it was nominally Pienaar’s job to get out wide and overload the wings. Also, in the first half Naismith and Pienaar frequently switched, and Naismith’s goal came when he made a very good late run from the center of the field to get on the end of a cross/cut-back from Oviedo. 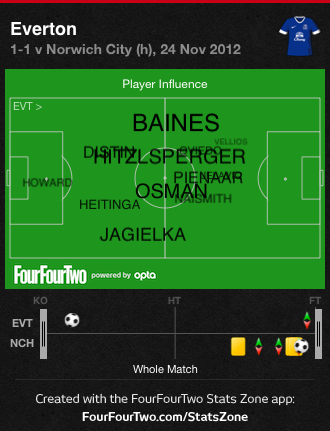 I think at this point we can safely say that Steven Naismith is not a winger. He is at his best when he is working centrally off of the striker finding pockets of space to get on the end of balls. The benefit of playing him on the wing is that when he drifts inside there are often not defenders there to pick him up. But, he lacks the pace, long passing, and crossing abilities to really generate attacks. That might be fine on a team with lots of avenues of attack, but against Norwich as the game wore on it proved to be a problem.

The lack of transition play was the main reason Norwich got into the game at the start of the second half. The pressured higher up the field and Everton didn’t seem to have a back-up plan to fall back on. As we’ve all seen there are generally two ways they handle pressure. First, lob it to Fellaini, and build from there, and second, get it to Baines and Coleman and let them work with Pienaar and Mirallas to build up the flanks. Well, neither of those options existed. Fellaini was suspended, Coleman was mysteriously missing from the team entirely, and Pienaar played centrally and on the right. Without any of their safety blankets the Toffees just couldn’t string passes together. There’s a pretty sharp difference between the number of short passes they completed in the first half and the second. 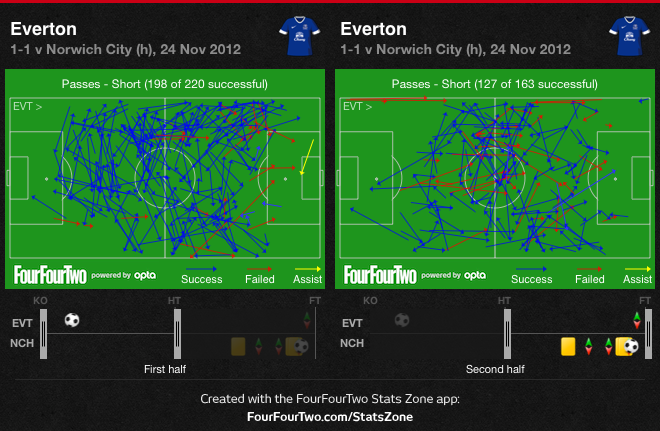 To his credit, Moyes seemed to realize this. At somewhere between the hour mark and 70 minutes, he moved Pienaar back to the left side, and switched Oviedo to the right. It was a move that really worked. As always happens when Pienaar is in front of him, Baines came alive. But, what was really surprising was how good Oviedo looked as an inverted winger. After starting the game with his assist to Naismith, he finished it looking like the most dangerous man on the pitch. Below are his passing and shooting stats from roughly the last half hour, after he switched with Pienaar. They certainly impressed me. 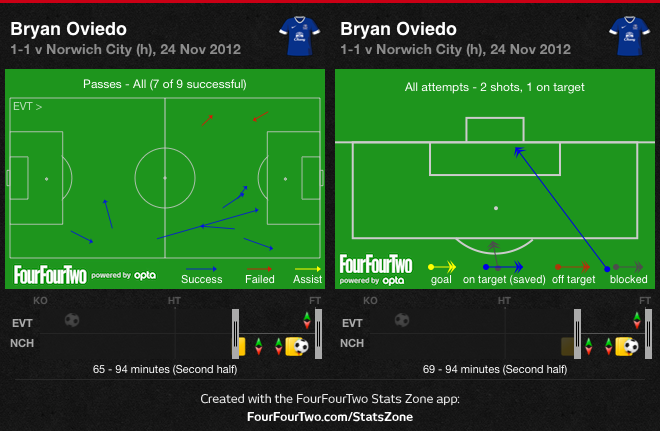 Now, I’ll be the first to admit that I knew very little about Oviedo when Moyes brought him in. I sort of figured him to be long term cover for Baines, and maybe a solid left wing option, kind of like a left footed Seamus Coleman. But clearly he has a lot more ability than that. And honestly if this weekend was any indication Moyes needs to find a way to get him more time on the field. In a disappointing weekend he was absolutely the bright spot.

Next up its Arsenal. I have no idea who’s healthy, no idea who Moyes will start, no idea how aggressive he will be against an Arsenal side that’s been a bit of Jekyll and Hyde this year. One thing I do know is that Arsenal’s defense should struggle to deal with the returning Fellaini (pretty much everybody does). It’s a very very important game, as right now, it looks like Arsenal, Spurs, Everton and West Brom are all going to be in it for that 4th Champion’s league spot. I just hope I’m not writing good things about bad results again.