Last week I said I wasn't getting too worked up about the loss to Reading, as I felt like Everton played a pretty strong game overall and would have come away with the win nine times out of ten on a normal day. But this game... this game was just irritating beyond belief. Maybe it was dropping points right at the end of the match. Maybe it was the role the referees played in Norwich's equalizer (keep reading for photographic proof that the refs screwed Everton). Maybe it was just one draw too many, but I feel like I'm beginning to reach my breaking point with this team. The defending needs to improve, and fast.

- At least Everton have discovered the right recipe for taking an early lead: find Steven Naismith in a position where he can't miss. Naismith almost helped open the scoring earlier, chasing down a long ball that Leon Osman eventually collected and fired wide. The goal, however, was born from a lovely lofted pass from Thomas Hitzlsperger. Even more impressive was how Bryan Oviedo chested the ball down and eluded Steven Whittaker to break free into the box. Oviedo quickly played a simple pass for Naismith, who met the ball cleanly and powered it past John Ruddy. An artful goal indeed.

- The rest of the half featured some more really attractive stuff from Everton, but much like weeks past those moves just didn't result in more goals. Even playing on opposite sides of the field, Leighton Baines and Steven Pienaar still managed to work a bit of their typical magic, combining on a terrific move that ended in a nice save from Ruddy and a bungled rebound attempt by Osman.

- Later on, Naismith had a light penalty shout after it appeared he might have been fouled in the box by Alexander Tettey. Baines then nearly hooked up with a sliding Nikica Jelavic, and near the end of the half Pienaar and Osman combined on a play very similar to the Baines-Pienaar chance from earlier. Unfortunately for Everton, Osman scuffed his shot badly.

- In the midst of all of that Everton dominance, Norwich City did manage a couple of good chances. Grant Holt did brilliantly to dance past Sylvain Distin and looked to be home free, but proceeded to bomb his shot way over the crossbar. Then Norwich were gifted a free header off of a corner kick, but Sebastien Bassong's effort was off target. Everton marched off the field at halftime leading 1-0 and were likely feeling like they had the game well in hand.

- When the teams came back out for the second half, Norwich looked recommitted and Everton appeared to be coasting just a bit. John Heitinga was whistled for a silly foul from a good spot for the Canaries, and Brad Pilkington's free kick was on target but didn't quite have the necessary pace to beat Tim Howard. It was the first time Howard's services had really been required all day.

- Holt then made a mess of his second terrific opportunity, somehow staying onside but letting the ball get away from him so that Howard could bat it away to safety. Howard and the Everton defense were very lucky here, as it looked like Holt was surprised to find himself onside and in such a fortuitous position.

- Norwich was inching closer to an equalizer, as Pilkington played a great ball into the box that both Holt and Robert Snodgrass had a crack at but could not hit decisively. The play ended when Snodgrass put in an ugly challenge on Hitzlsperger that should have resulted in a booking. Not long after, Heitinga was called into action to clear another effort from Snodgrass off the line.

- There were two more great chances for Everton to extend their lead. Baines made one of his trademark sparkling runs, flashing through at least four defenders and firing hard and low on goal. Ruddy denied that opportunity, but he wasn't needed later on when Naismith found himself free on goal with support but launched his pass out of the reach of everybody.

- Finally, with stoppage time seconds away, referee Mike Jones whistled Baines for a foul that was simply nonexistent. Norwich sub Steve Morison had tripped over either the ball or his own feet, but what was clear was that Baines didn't touch the forward. Javier Garrido placed the free kick perfectly at the back post, and Bassong headed the ball off the bar and just over the line for the tying goal. It was a poorly defended set piece from a tricky position, though replays clearly showed the original foul never should have been called.

- But let's leave aside for now the matter of whether or not the foul by Baines was legitimate. The other issue was the placing of the free kick, and the possibility that Garrido was allowed to spot the ball closer to the goal than where the foul was actually committed. Take a look for yourself; the pictures don't lie: 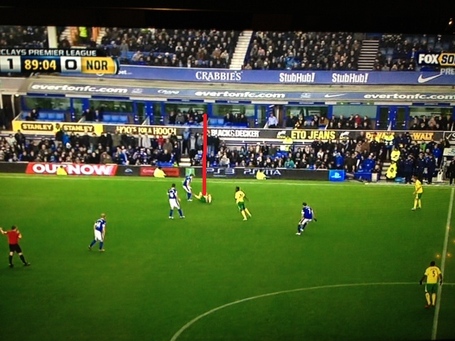 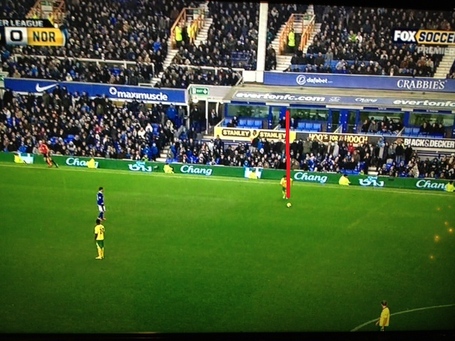 For a reference point, look at the signage in the stands behind the players. When the foul is committed, Morison is lined up with the far left of the Black & Decker sign. But when Garrido takes the free kick, the spot of the ball is lined up with the far right of the Stanley sign. And this is after the referee had already made Garrido move the spot of the ball back! Take a look at the original placement of the free kick before Mike Jones told Garrido he was too close:

3. Original placement of the free kick: 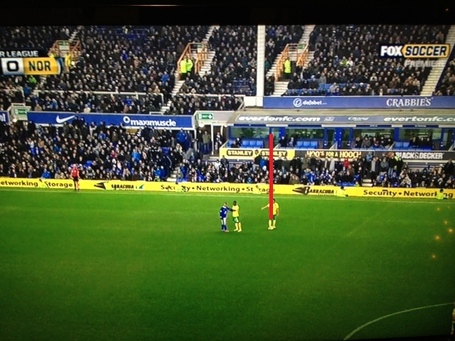 You'll notice that it's virtually identical to where the free kick was eventually taken, only moved ever so slightly back and toward the touchline. I get that free kicks are frequently taken from closer positions than should be allowed, but this exchange epitomized the lack of control Mike Jones had over the match today. To tell a player to move the ball back, watch the player move it all of two feet, and then allow the free kick to proceed, is ludicrous. And again, the foul never should have been called in the first place!

And this was just one example; the nonsense at the other end of the field with Everton's free kick moments before (during which the Norwich players had to be continuously told to retreat to the ten foot mark) was another product of Jones's ineffectual refereeing. Don't get me wrong, this was another case where Everton should have buried the game well before it was decided. But that doesn't change the fact that the refs absolutely killed the Toffees today. 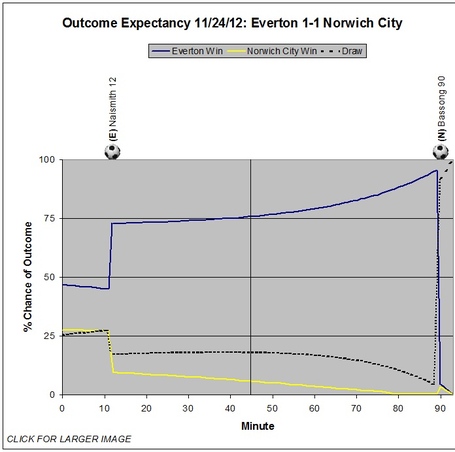