"I’m as angry as I’ve ever been after a game. I’m not angry with the officials, I’m angry with my team. We didn’t punish them; we left the door ajar, and let them in." That was the reaction of David Moyes to an absolutely baffling 2-1 defeat to Reading today at the Madejski Stadium. As sickening as the result was, I love that quote. That's exactly what every last player on the team needed to hear after the game today, because that second half performance was nowhere near deserving of even a single point.

- Everton scored first! Pigs are flying, hell is frozen over, etc. The first goal of the game was the product of some tenacious work by Everton's attacking force, but was thanks even more to some shocking attempts by Reading to clear the danger. Generally, heading the ball straight upward is not a good strategy for clearing the ball out of your area, and Steven Naismith made Reading pay by finishing off the goal. Most of the dirty work was done by Nikica Jelavic who hooked the ball into the heart of the penalty area and Marouane Fellaini who controlled the ball so that Naismith could score.

- Moments later, Adam le Fondre really should have equalized when he beat a wayward Tim Howard to a long ball outside the Everton penalty area, but a very un-Ibrahimovic-like finish meant that the shot missed the open goalmouth. Le Fondre would more than make up for his miss later on, but this exchange was just the start of a very rough afternoon for Howard.

- The rest of the half was basically like one of those games you play at the fair where you have to throw the ring around the bottle to win a prize, but the game is rigged so that it's practically impossible to win. While the game was turning into a shooting gallery for Everton, the second goal that seemed inevitable just never arrived, thanks to both poor finishing and bad refereeing.

- First, Thomas Hitzlsperger played a lovely little chip pass for Steven Pienaar, who in turn found Nikica Jelavic lurking at the near post. However, Jelavic slotted his shot wide of the mark. Then, Kaspars Gorkss chopped down Naismith on the edge of the box rather obviously, but no foul was called on the play. Replays showed that the contact definitely occurred inside the penalty area, meaning Everton had been robbed of a spot kick.

- The onslaught continued as Jelavic picked the pocket of Chris Gunter in a bad spot for Reading, sending Pienaar marauding forward with options all around him. Reading defended the situation reasonably well and Pienaar elected to go for goal himself, but again an Everton player was unable to so much as test Adam Federici as the shot whistled wide. Hitzlsperger eventually did force Federici into action with a long-range effort that seemed to pick up velocity as it went, but the shot was directly at the keeper and palmed easily away.

- Leon Osman was next to get his turn at extending the lead, but the newly minted England international was unable to find his midweek form when Naismith flicked the ball on to set him up one-on-one with Federici. Osman looked like his ultimate goal was to chip the onrushing keeper, but unfortunately Federici won the race and got there first to block the ball away for a corner.

- But there was still to be one more priceless opportunity for Everton that resulted in nothing, this time our old friend Martin Atkinson popping up to deny a blatant handball in the area. Sean Morrison was the culprit, his arm clearly getting in the way of Jelavic's strike, but Atkinson ignored the obvious. The two teams went into the break with Everton wondering yet again how they did not lead the match by at least three goals.

- The home side came out of the dressing room looking motivated and full of belief, and in five minutes they were able to do what Everton could not for most of the first half and turned their possession into a goal. Hitzlsperger was called for a light foul about ten yards outside the box, setting up a free kick opportunity for Nicky Shorey. The longtime Reading man played a delightful ball into the scramble in front of Howard, and in the chaos Le Fondre was somehow able to break free of the defense and place a cool header past the helpless Everton keeper. All of a sudden, the match was tied and Reading was the team with all of the momentum.

- Really, there wasn't too much else to report until the penalty kick in the 79th minute that wound up being Reading's unlikely winner. Even the irresolute Martin Atkinson was left with little choice but to whistle Seamus Coleman for bumbling clumsily into le Fondre inside the area, a frankly stupid play with Everton under very little pressure at the time. Le Fondre stepped up and sent Howard the wrong way, and just like that Everton were staring down the barrel of an afternoon with zero points to take home to Liverpool.

- However, almost immediately after the penalty Everton did generate one final chance to salvage something from the match, as a Fellaini header hit the ground, bounced high into the air, struck the post, and bounced straight into the grateful arms of Federici. It was a desperately unlucky angle, as two inches in either direction would have either resulted in a goal or a rebound directly into the onrush of Everton forwards. But it just wasn't to be on this day, and the game finished 2-1 to Reading as their fans joyfully celebrated their team's first win of the year.

Maybe it's just shiny new toy syndrome, but I thought one of the positives to take away from today's match was the play of Thomas Hitzlsperger. I was pretty unimpressed with his cameo versus Sunderland last week, but today he looked composed, passed the ball accurately, and showed he still has some quality left in him. In case you missed the news, Phil Neville is expected to miss the next six to eight weeks after undergoing a surprise knee surgery on Friday, so even with Darron Gibson hopefully set to return soon we may need to rely on Hitzlsperger more than we expected to in the coming weeks.

As for the result, yeah, this game sucked. No two ways about it. However, I will say that I didn't see anything to alarm me too much in the long-term. Yes, Seamus Coleman made another blunder but I honestly thought he was playing a strong game up until that unfortunate moment (don't forget the superb goal-saving tackle he made minutes before he gave up the penalty). I guess I might get some flak for not getting too down after this loss, but I still think we have so much more quality in the side than we did last year, and with just a bit of luck this game today would have been over long before Reading found their footing. Go beat Norwich next week and all will be forgiven; it's the fickle nature of football. 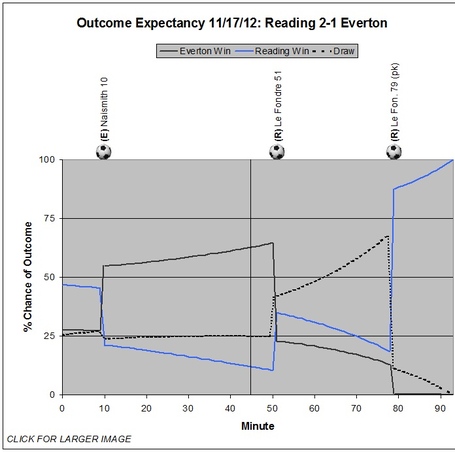