Sunderland scored on a free kick and parked the bus against Everton. It wasn't until Fellaini dropped into a more central position that Everton figured out how to unlock them.

Finally, we have a win to break down. And it was an interesting win at that. In a lot of ways the game this weekend continued the trends that started to develop in the Fulham match. Both goals this week came as a result of playing the ball along the ground, as opposed to initiating the offense with a long ball to Fellaini, and both were quite obviously a direct result of dropping Fellaini into a deeper position in the midfield. Sunderland had actively chosen to concede the center of the field, so it’s not really a surprise that when Everton’s best offensive weapon was put into that space he made something happen. Let’s break it down.

The first thing I want to talk about, is a little more general than the nitty gritty I usually delve into. There is sort of an informal hierarchy in the Premier League. It’s a league with very little aggressive defensive pressure. So, as the season progress and the table begins to sort itself out, many games follow the same path. The inferior team, especially on the road, sits deep defensively, and challenges the superior team to break them down. It was clear from minute one that that was Martin O’neill’s strategy. And if Everton remain near the top of the table I expect they will see that approach more and more. That’s why it is so supremely important they figure out ways to be dangerous without solely relying on long balls to Fellaini to initiate the offense.

This week, when Fellaini was the focal point of the defense, the Toffee’s main offensive weapon was Kevin Mirallas. Although he only played for 30 minutes he was clearly the star of the show while he was out there. Mirallas frequently got the ball at his feet and was able to run at players vainly trying to keep him in front of them. As you can see from where he received the ball, Mirallas and Pienaar once again spent a lot of time switching flanks. 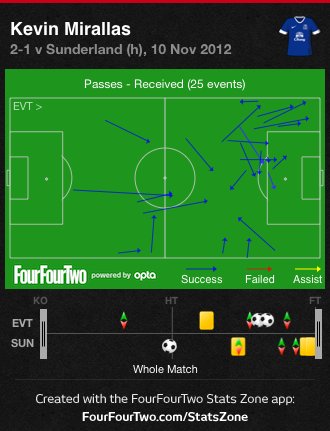 And while Pienaar and Mirallas are obviously both right footed they bring incredibly different things to the table from the left wing position. Pienaar is best when he is running into space, moving from the wing into the center to receive passes/flick-ons/knock-downs more centrally. Mirallas on the other hand takes the ball on the wing, and looks to dribble past players. They both move centrally, it’s just that Pienaar starts to do it without the ball, and Mirallas waits until he has the ball at his feet. So, when the defense is packed tight and Mirallas can receive passes more or less uncontested it makes a lot of sense for him to have the left side. In 30 minutes he attempted 7 take-ons, that’s a quarter of the team’s total. He also took 2 shots and created 2 other chances. That’s an insanely productive half hour.

After he left, however, Everton struggled to break down the defense. They had most of the ball, and they had it in attacking positions, but Sunderland was willing to concede that, provided that Everton wasn’t creating clear cut chances, which they weren’t. For example, Sunderland didn’t care that Leon Osman was having a really good offensive game. If we look at Osman this weekend and compare him to the Liverpool match, (I’m using Liverpool instead of last week at Fulham because Fulham also spent long stretches packing it in, and Liverpool most certainly did not) two things are immediately clear. Osman passed the ball forward more, and Osman played more of his passes in the final third. 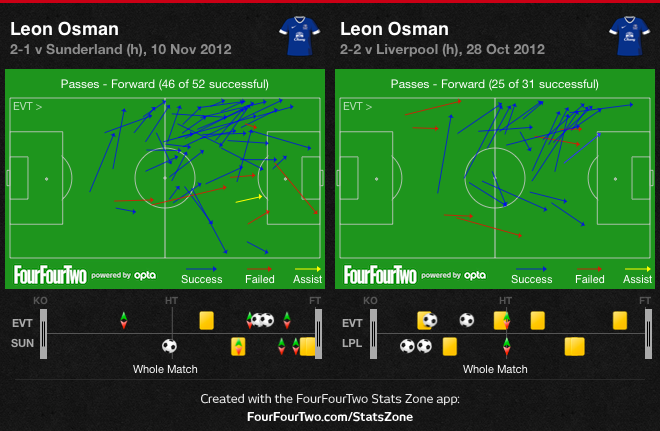 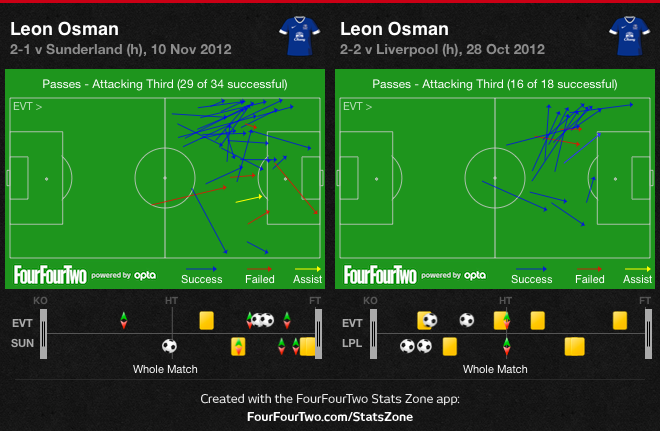 That’s to be expected. The defense wasn’t challenging him, which gave him more time on the ball, and more space to find passing lanes. But, the good game for Osman, doesn’t necessarily translate into a good game for Everton. Despite seeing a lot of the ball in the attacking third, he didn’t create a single chance until Fellaini dropped into the midfield to join him.

All of that is preamble to Moyes deciding to bring on a second striker in the 73 minute, and take off Phil Neville. It immediately changed the tone of the game. The major impact, as you can see from the influence charts is that Fellaini once again became the focal point of the attack. While in the first 25 minutes of the second half he had been somewhat limited and uninvolved, now he had all the space in the world in front of him. Both his goal and his assist came from him moving into open spaces behind the two strikers and getting the ball played to his feet. Those spaces had been there the entire game, but without Mirallas nobody had been able to take advantage of them. Fellaini did it twice in two minutes. 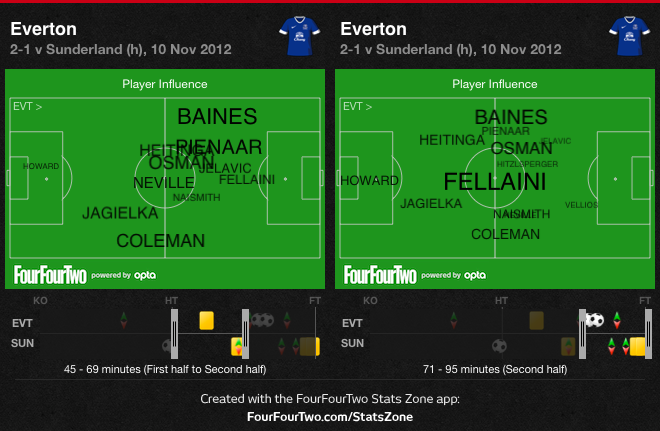 On Saturday that meant a great win for Everton, but in the long run that’s cause for concern. We all agree that Fellaini is too valuable in an advanced position to start him in the midfield, but if he is a target up top there needs to be a complementary attack that can break defenses down on the ground. Mirallas certainly provides that, but he can’t be the only one. The lack of creativity isn’t a particularly new problem for Everton, but a reality in which week in and week out teams look to park the bus against them is.

Still, for this week, a win is a win is a win, and it’s long overdue. The team’s results are once again moving in the right direction, along with their play. So, we ignore the aimless stretches, and the defensive lapses. Instead we focus on yet another game where the marvelous Fellaini comes to the rescue. Hopefully he won’t have to do it again next week at Reading.