It's November 11. We haven't completed even a third of the season yet. We still have six months to go until we're done here. But you know what? With a brutal Arsenal-Man City-Tottenham stretch looming, this is the type of match that Everton simply must take three points from if they have realistic ambitions for a top four finish. Though the Blues probably deserved only a draw today at best, they dug deep and found a way to get the job done in the end. And once again, the hero was the man with the hair.

- I nearly wrote here how Everton were practically sleepwalking through most of the first 45 minutes, but that's not entirely accurate. In fact, the scales were tipped ridiculously in their favor as far as possession goes. But while the Black Cats saw very little of the ball, there can be no qualms with the fact that this half very much belonged to the visitors. Stephane Sessegnon, a player I've always rated, bulldozed past the helpless Seamus Coleman in the early stages of the match, forcing Tim Howard into a fine kick save. It was a sign of more danger to come for the Everton back line.

- Next, Sessegnon picked out a peach of a pass to find the man who has thus far been Sunderland's lone goalscoring threat, Steven Fletcher. However, Fletcher's touch took him into a spot that was just wide enough to make the finish too difficult to pull off. The ball slid inches to the right of the far post, but Everton were lucky.

- With the game still a rather stale affair, alarm bells began sounding all around Goodison when Everton's most creative player Kevin Mirallas was forced to leave the match with what obviously looked like a hamstring problem. What was really unsettling was how Mirallas left the pitch almost immediately after picking up the injury, leading you to believe that the damage could be substantial. Thankfully, David Moyes said after the game that Mirallas may not be that seriously hurt, but we'll await the results of the scan all the same. Steven Naismith replaced Mirallas and did little to ease the loss of the Belgian.

- Meanwhile, the Toffees were finding the stubborn Sunderland defense difficult to break down. Nikica Jelavic had a couple of decent chances, one coming on a long pass courtesy of Mirallas before he was subbed off. But Jelavic paid for a moment of indecision as he was caught by John O'Shea and left with nothing but a halfhearted penalty claim to show for his efforts. Later Jelavic connected on a dangerous looking free kick from Leighton Baines, but an awkward looking volley missed the target.

- Finally, with seconds left on the clock Sunderland found the goal they had been threatening to score for some time. The breakthrough came when Leon Osman fell asleep on defensive duty, letting his man (Adam Johnson) swerve past him to meet a looping pass for a one-time finish past Howard. It was a cruel way to end the half, but really no more than Everton deserved for a very mediocre period of play.

- After the restart, the first two chances strangely both fell to John Heitinga. The first was generated off a rare contribution from Naismith who nodded the ball smartly into the path of the defender for a vicious strike, and it likely would have beaten keeper Simon Mignolet had his defense not blocked the shot aside. The second was an even better opening, but Heitinga's glancing header off a free kick could not find the target.

- Honestly, I didn't think Everton had another comeback in them at this point. They were moving too slowly and they just didn't look like they had the creativity to break down a Sunderland defense that was doing very well to shut down Everton's usual attacking outlets. Then, out of nowhere, the game was tied. Despite a relatively quiet day up until the 76th minute, the next three minutes would belong to Marouane Fellaini.

- First, Fellaini restored parity to the game with a perfectly placed poke of a shot, the ball hugging the grass but finding the back of the net through a maze of bodies. Mignolet never saw it, and it was the suddenness of the shot that surprised Sunderland's defense more than anything.

- Minutes later, with the fans firmly back behind the home side and the visitors looking wobbly, Everton had the lead thanks to some wonderful teamwork from Fellaini and Jelavic. Receiving the ball in Sunderland's penalty area, Fellaini pulled off the extremely difficult (and extremely pretty) no-look flick on for Jelavic to meet, and the Croatian wasn't going to miss from that range. In the span of a couple of minutes the emotions on each sideline had been completely reversed, with Moyes rejuvenated and Martin O'Neill looking like he was stuck in the middle of his own personal horror movie.

- Everton saw out the rest of the game reasonably well, but there was one moment of panic where it looked like we might see a repeat of the finish at Fulham last week. After a mad scramble for a loose ball in front of Howard, Carlos Cuellar found the ball with ample net to aim at but couldn't beat his own teammate Craig Gardner who blocked the shot. Summed up the day for Sunderland quite nicely, I thought; they just couldn't get out of their own way.

- Thomas Hitzlsperger made his Everton debut in the 86th minute and saw a bit of the ball, including one dreadful shot in stoppage time. A ridiculous call right at the end of the game denied Sunderland a final free kick opportunity, but the whistle blew and Everton breathed a sigh of relief knowing they had escaped with one they sorely needed.

Wow, lots of 6's today. But that fits; I think the performance of many of the players fell under the category of "good, not great," and the ratings bear that out.

Lots of interesting notes to take away from this match. Marouane Fellaini now has six Premier League goals this season, equaling his totals from the last three seasons combined. Also, this was the sixth consecutive game in which Everton have conceded the first goal, yet they have not lost any of those games (two won, four drawn). This was also Everton's first victory since September, a drought of six weeks without a win.

Of course, eventually Everton are going to have to figure out a way to start keeping more clean sheets and scoring the first goal. For now though, let's enjoy another week in the top four and another match to add to the unbeaten streak. Whatever we have to complain about now, just think back to where we were at this point last year. It certainly puts things into perspective. 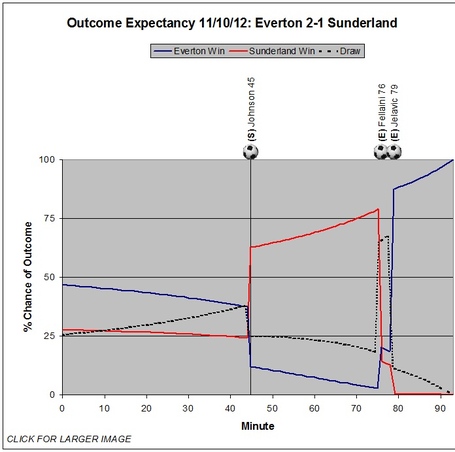