Everton got stuck with a lemon of a referee, but instead of complaining (well maybe in addition to complaining) David Moyes made the right tactical changes to ensure his players were protected and his team still earned a point.

Share All sharing options for: Wigan v Everton Tactical Analysis: How to Cope with Kevin Friend

Well, that was….interesting. It’s never easy to tell the tactical story of a game when one of the main talking points is the referee. My general view is that tactics are all about analyzing how well the players and manager impacted the things under their control. Usually sloppy refereeing isn’t something that is going to change a manager’s tactics; it’s just something both sides need to live with. The game against Wigan though is a bit of an exception. David Moyes made some dramatic changes at halftime, and those changes were due at least in part to the way Kevin Friend was refereeing the game. So, on tap today we’ll look at what Moyes did at halftime, and why he did it. Without further ado I present to you a Tale of Two Halves. The main players, as it seems they always are these days, are Marouane Fellaini and Seamus Coleman.

Seamus Coleman did not have a very good game. Specifically he had a god awful first half, and Wigan expertly exploited his defensive shortcomings. Down below you can see all of the home team’s passes in the first half. In general those passes break down into two types. The first are long balls out of the back which were generally played quickly and with the purpose of springing a striker into space. The second are balls played across the field into the right side of Everton’s defense. Coleman looked woefully inept on those balls, and the first goal was a direct result of one of those passes sliding by him to Shaun Maloney’s feet, and then Maloney skipping right by Coleman to feed in an easy assist to Kone (who incidentally was clearly offside). And while that was the only goal scored that way on the day, Coleman spent the entire half running around lost, caught between passer and receiver and generally being out of position. 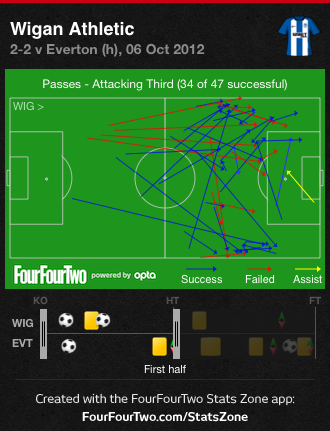 Fellaini was also poor in the first half, although for completely different reasons. While Wigan exposed Coleman’s lack of experience at one end the field, they exploited Fellaini’s lack of emotional composure at the other end. There’s no doubt that Wigan actively decided to play as roughly with Fellaini as referee Kevin Friend would allow them, and Friend, as it turns out, allowed them a tremendous amount of leeway. A clearly frustrated Fellaini became more and more demonstrative as the game went on and he continued to feel that the defenders, Gary Caldwell in particular, were repeatedly fouling him and getting away with it. It boiled over for Fellaini near the end of the first half when he committed 3 fouls in the last 8 minutes, including a raised elbow that truly bordered on a red card offense (I think that a yellow card was almost certainly the right call, but given how visibly angry Fellaini was at that point in the match it was perfectly reasonable for Wigan to claim the elbow was intentional).

David Moyes sent the team out for the second half with a minor personnel change, bringing on Distin for Heiting in defense. It was a good change as a slightly pacier Distin was better able to handle the long balls into space than Heitinga was. But, the major change was in how the unchanged players were positioned. As you can see below, Moyes yanked the whole team around. Dropping Fellaini into central midfield, shifting Osman out to the right wing and moving Mirallas up top meant that the team looked a lot more like it did last year than it has so far this season. 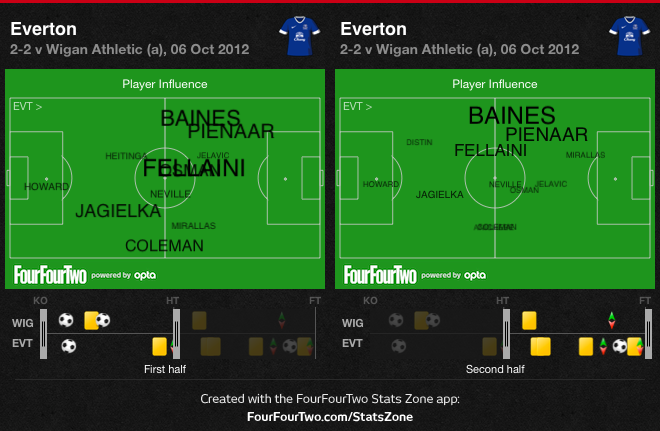 It is also possible that I’m simply being unkind, and that the shift was purely a tactical one to shore up the center of the pitch. Because Wigan were playing with so much width in the first half Neville would frequently get dragged to the left side of defense by the initial long ball only to see the ball then swung back to the right against an isolated, overmatched Coleman. On the second goal in particular you can see Neville get dragged over to help Heitinga as Di Santo runs unmarked into the box behind him. But, with Fellaini sitting deeper alongside him Wigan had a much harder time playing the passes that had worked in the first half…look at all those red lines. 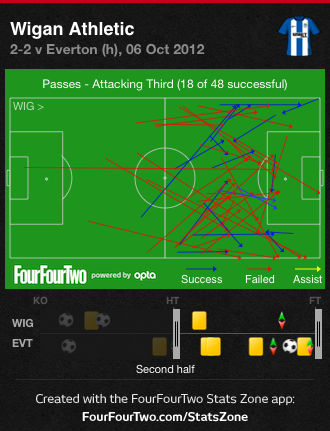 The problem with the change though is that much like last season it left Everton with very little effective passing in the middle of the pitch. Below is the second half passing from the midfield duo of Fellaini and Neville. Fellaini is appropriately aggressive but suffers from inaccuracy, only completing 67.5% of his passes, and while Neville’s accuracy is better, the only two passes he didn’t complete happen to be the only two he attempted to pass forward into the final third. 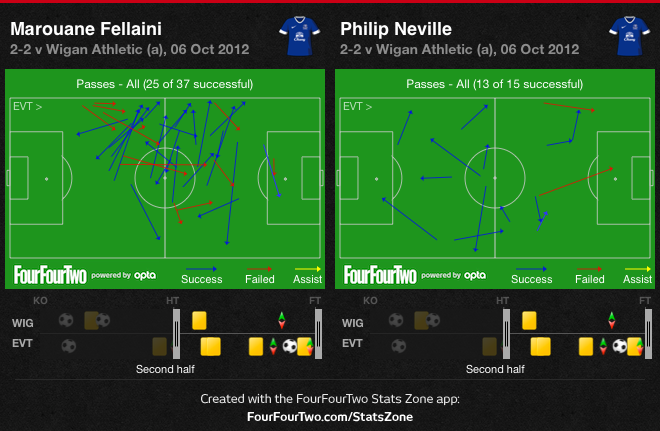 Against Wigan that didn't end up bogging Everton down too badly because Baines and Pienaar were able to exert their will on the game and own the left side of the field, and against the quicker mix of Mirallas and Jelavic (as opposed to Fellaini and Jelavic) the center of the Wigan defense looked very vulnerable. Still, it wasn’t the way that Everton wanted to play.

The bottom line though is that despite everything the Toffees still salvaged a point on the road late in the day, and they still sit in 4th place, only 1 point off of 2nd. But once again they head into the international break after a bit of an unsettling game. Is the result a disaster? No. But are there enough chinks in the armor to begin to worry me? It’s starting to look that way.