The inaugural Merseyside derby had a lot of strategic maneuvering, but in the end all the sound and the fury signified nothing as neither side could engineer a winning goal.

Another derby, another refereeing controversy, and once again all of us chattering fans have talking point galore. From a tactical standpoint Everton didn’t break out any real surprises, although Moyes did opt for Naismith and Coleman on the right instead of playing the more conservative option of Coleman or Naismith ahead of Hibbert. Liverpool on the other hand broke out a whole bunch of new tricks to varying degrees of effectiveness. So, let’s break it down half by half.

Obviously the first half was where all the goals (all the allowed goals at any rate) were scored. Two of them were from set pieces, thanks to general confusion and poor marking on Everton’s side, and then a poor and somewhat unlucky punch from Liverpool keeper Brad Jones, so they weren’t particularly interesting tactically. The other two, however, were direct results of Moyes’s personnel decisions. The movement that led to the opening goal for Everton was started when Coleman made the bad decision to try and cut out a pass to Jose Enrique, Liverpool’s left back. When Enrique easily played the ball around him, it put the defense in an impossible position. Leighton Baines actually did really well to deny the initial cross before the ball ran through to Suarez who pounded it in off the left back.

But, on the offensive side of the ball, it was Naismith who scored the equalizer. He made a very good run to a central position in front of goal to score. It’s a run I think we can safely say that Coleman, who likes to stay wide, would not have made. And besides the goal Naismith had a very good game. He was much more involved than he has in the past and seemed quite comfortable combining with Coleman. And, as you can see below he did a nice job moving to more central positions which helped Osman and Neville in addition to giving Coleman room to get forward. 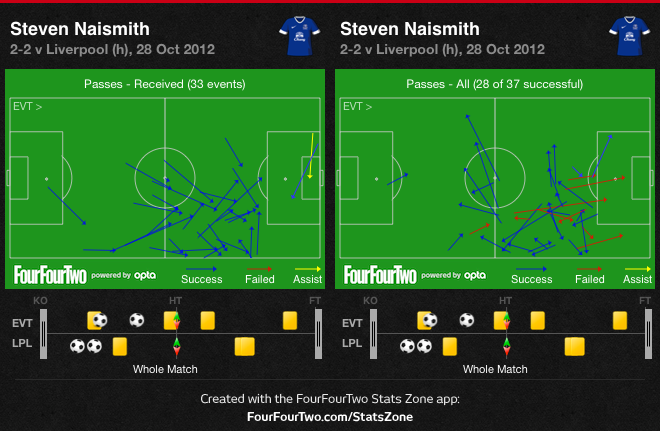 Defensively, although it seems odd to say after a half in which Liverpool scored two goals, Everton did well, and played the game they wanted to play. Fellaini did an excellent job of limiting Joe Allen’s involvement. While Allen was still Liverpool’s most prolific passer, as the chalkboards show the number of passes he played dropped by a third from his last outing. 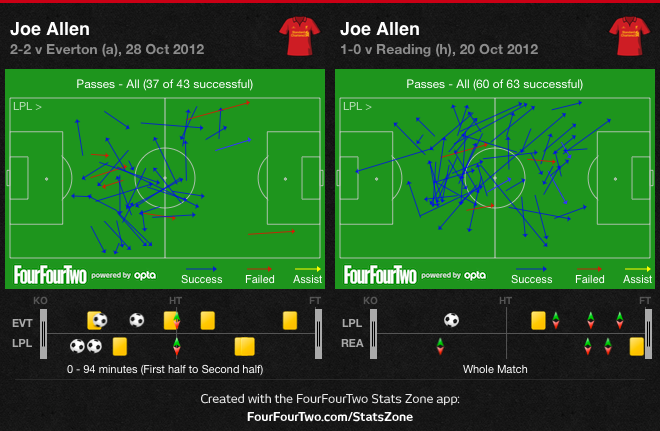 One odd effect of Fellaini’s defensive duties was that he was often dragged to the right side because Allen operates primarily in the right center of midfield. You can see he received more long balls there than on the left, which is the opposite of what we’re used to. That fact helps to explain both why he seemed a little disconnected offensively, and why Mirallas was so dominant as a dribbler on the left. He had a lot of room to work with, with Fellaini and drawing defenders away. As always, here’s the visual evidence. 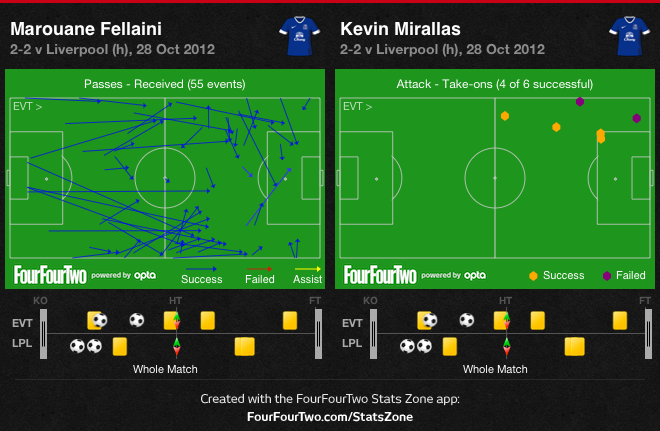 Everton also coped well with the little first half surprised Brendan Rodgers cooked up starting Raheem Sterling on the right instead of the left. Presumably this was with the hope of pinning Leighton Baines back and limiting his attacking impact, but that didn’t work at all. Instead Everton forced him to defend, which he did reluctantly and clumsily, picking up a yellow and narrowly avoiding a second. Ultimately Rodgers had Sterling switch wings to ensure he made it to halftime safely.

After the half, the game change fairly dramatically. Rodgers made the roughly like for like change of introducing Jonjo Shelvey for Nuri Sahin, but also made a second more radical change, lifting winger Suso in favor of defender Sebastian Coates. That would suggest that Rodgers wanted to go with only 3 defenders and have his two starting fullbacks Wisdom and Jose Enrique push up into the midfield. In practice though, as you can see in the first half and second half influence maps, while Jose Enrique did in fact transform himself into a midfielder, Wisdom actually played even more conservatively defensively. His total lack of offensive presence made it all the more painful that Mirallas picked up a knock and wasn’t able to return for the second half. Without any defensive responsibilities he would have spent 45 minutes doing nothing but running at the overmatched Wisdom. 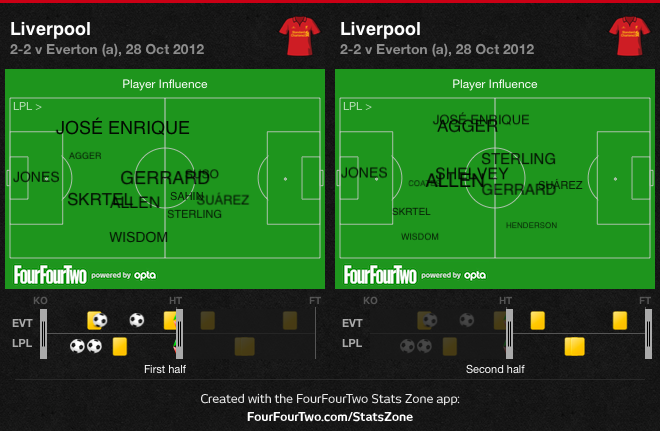 As it was, instead of switching the 3 at the back it seemed that Liverpool ended up playing a lopsided 4-4-1-1, with Wisdom staying anchored at the right fullback spot and Agger shifting from the middle out to the left. Up top Sterling moved centrally behind Suarez, but the midfield was kind of a strange lop sided mess with Jose Enrique on the left, but the three central midfielders remaining roughly in there middle triangle with nobody out on the right. Sadly the inexperienced and slightly overmatched Magaye Gueye wasn’t able to take advantage of the space. He didn’t play badly, but he was much too conservative given the odd opposition midfield he was confronted with.

On the other hand, despite all the weirdness Rodgers’ adjustment was majorly successful in two distinct ways. First, Shelvey had a much bigger impact than Sahin. When you look at where they each received the ball you can see that they are very very different players. Sahin likes to (or is ordered to) stay high up the pitch and get the ball delivered to him in the final third. Shelvey on the other hand dropped deep to get the ball and then would turn and run with it. He was much more involved in the game and led several dangerous attacks. Although Everton seemed to resolve that problem because of the 17 passes he received only 3 came after the 70th minute. 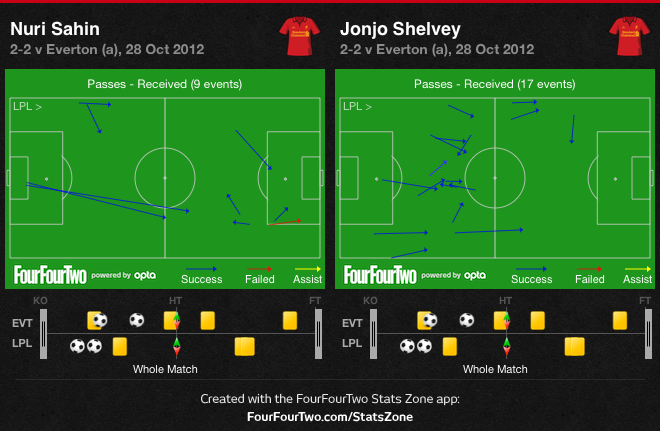 Second, moving Sterling centrally and further up the pitch removed his defensive responsibilities. As the first half was closing it became clear that Everton was determined to exploit the young winger. He already had a yellow card, and was clearly both unable and unwilling to defend from his wing position. By changing the system Rodgers did an excellent job of protecting his youngster while also giving him the chance to continue to contribute offensively. Liverpool looked the most dangerous in the second half when the ball went up the field quickly to Suarez and Sterling, and the two of them freelanced against our older, slower defenders.

Despite all that jockeying nobody broke through in the second half (technically, thanks to a rare pro Everton break) and a draw was probably a fair result. So, what should we take away from the game? First and foremost, this is the end of the line for the hard fought comeback draw story line. The next four games are against Fulham on the road, home against Sunderland, away against Reading then home for Norwich. Draws against those teams aren’t plucky, or heroic, they are failures. End of story. Right now three points separates 4th from 9th in the table. That means that despite the last three weeks Everton are still in it, but it won’t last for long. Tottenham and Arsenal are too good not to string some wins together and put some space between them and the field. I’d like to think Everton are in that class as well, but the last three games haven’t shown me that. If the next for don’t it may be too late.