In a Merseyside Derby that left us with no shortage of subjects for the water cooler but in the end settled little, Everton came back from 2-0 down to at least claim a share of the spoils with their arch rivals. However, Everton fans were expecting more against the weakest Liverpool side in recent memory, leaving us with a pile of conflicting emotions and a city where nothing has been decided yet. Stay tuned for full match coverage...

- Both sides had their fair share of corners early on, as Nikica Jelavic's floated ball nearly found Steven Naismith on the back post before Liverpool earned a corner of their own with some tight passing. In a move that caused disturbing flashbacks to Junior Hoilett's goal last week, Jose Enrique initiated a counter attack off of one of the corners but decided his best move in the end was to pass the ball directly to Tim Howard.

- Kevin Mirallas played really well during the short time he was on the field (more on that in a bit), exemplified by a brilliant mazy run through the defense. Brad Jones did well to get a hand on the resulting corner, tipping the ball over the end line for yet another corner.

- However, it was to be our neighbors who found the back of the net first. Jose Enrique found room to work down the left channel thanks to Suso, and he used that space to find Luis Suarez. Scuffing his shot, Suarez shot into the path of a scrambling Leighton Baines, and the ball deflected cleanly into the Everton goal. Cue Suarez acting like the clown that he is, as the striker ran straight to the touchline and flopped to the ground theatrically in front of David Moyes. Give Moyes credit for doing nothing more than staring down the idiot - I'm not sure I would have had the same restraint!

- In no time all, our worst nightmares seemed to be materializing before our eyes as Liverpool led by an astonishing two goals through the famous flopper himself. The goal was generated through a free kick after Leon Osman was whistled for a phantom foul, but Everton had no one to blame but themselves for woeful marking on Suarez. Jelavic and Phil Jagielka were both probably culpable, but Suarez needed only the slightest of touches to beat Howard and stun the Goodison faithful.

- Down by two goals, Everton were desperate for an immediate response to rally the troops, and thankfully Osman was able to provide the lifeline they craved. Once more, Everton had earned a corner kick, and Jones's punch was poor and sent the ball straight back into the danger area. Osman stayed calm, collected the ball at his feet, and hit a hard low shot that caught a piece of Joe Allen on its way into the net. The lead had been halved, and Everton maintained hope that all was not lost.

- Over the next few minutes every call seemed to go against Everton. First Andre Marriner allowed Everton to play a bad advantage when the play really should have been whistled dead. Then Jones managed to draw a foul by jumping onto Sylvain Distin's back. The appointment of Marriner was much discussed leading up to the match, and my final verdict on his performance? Could have been worse but could have been a lot better, with the bad calls tipped slightly in Liverpool's favor.

- Suarez came dangerously close to scoring his second goal on the other end, and despite how much I hate him I do have to admit he played pretty well overall today (antics notwithstanding).

- Despite that chance Everton were dominating at this point, and the eventual equalizer would be generated from a rather dubious throw-in. Mirallas found Fellaini in the box from what looked to be an attempt on goal, but the ball sat well for Fellaini to chip beautifully for the onrushing Naismith. The Scot opened his Everton account with the simplest of finishes, a deserved reward for what was easily his best half of football since moving to the club over the summer. The Old Lady was absolutely rocking.

- There were two more things to note before the halftime whistle, one slightly humorous and one very worrisome. Of all of the people on the pitch, who would you guess would be the one to be booked for diving? If you guessed Phil Neville, you are correct! Silly play by Neville but amusing all the same. However, Everton suffered a huge blow right before the half when Mirallas came up lame after a run inside the box. Contact was minimal, but sometimes those can be the worst types of injuries. Mirallas did not come out for the second half, and that more than anything changed the dynamic of the game.

- I may have written a small novel for the first half, but it was a pulsating 45 minutes that deserves to be talked about. With the derby looking like it was headed for a classic finish, the second half unfortunately did not live up to the hype.

- Maybe the best chance of the entire half fell to Liverpool's youngster Raheem Sterling early on, as the teenager used his speed to break free of the defense and take on Howard one-on-one. Sterling tried to chip Howard, but the shot was hilariously bad and nearly lacked the pace to even cross the end line for the goal kick. Funny stuff as Suarez bitched and moaned, but I have to say that I came away from this match entirely unimpressed with Sterling. Yes, he has raw ability and pace, but his finishing was unbelievably poor today. He also was overaggressive with many challenges and might have been sent off on another day.

- If there were any neutrals who thought that the Evertonians were being unnecessarily harsh on Suarez, those notions were erased after Suarez cried for a handball that never happened and then stomped on Sylvain Distin's foot for a yellow card. Can anyone remember a player we love to hate more? I think only Rooney right after he left rivals the contempt Everton fans have for Suarez.

- The half was a true stalemate as each side managed only half chances. Steven Gerrard tried to put a long free kick past Howard but the American was equal to the task. Seamus Coleman and Marouane Fellaini worked a terrific little move to set up Jelavic but Martin Skrtel did well to eliminate the threat. Jelavic saw his best opportunity of the day deflect just wide after he headed a perfectly placed Baines free kick. Jonjo Shelvey was given acres of space to charge forward but wasted his chance. In a moment of madness, substitute Magaye Gueye failed to clear the ball forcing Jagielka into a last ditch block to deny Gerrard.

- With the game looking like it was headed to an uneventful conclusion, there was to be one final moment of controversy. Liverpool played a long ball into the box that was headed by Sebastian Coates across the face of goal, teeing up Suarez for a thunderous finish and the apparent winner. However, the goal was (incorrectly) ruled offside. Liverpool fans moaned, but I really don't think they have much room to complain considering Coates was wearing Jagielka like a glove. 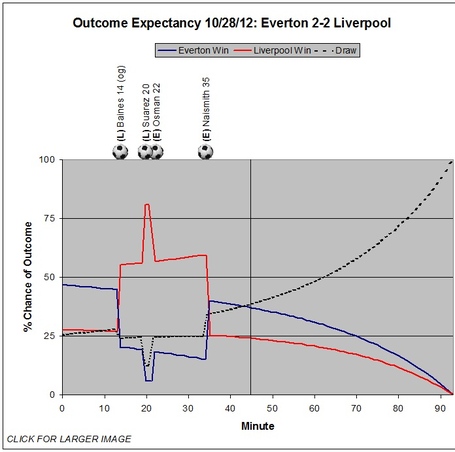