What does Everton need to do to win this weekend? They just need to put in a solid performance that plays to their strengths.

So, there’s kind of a big game this weekend. It’s derby weekend. Or, to put it another way, it’s the 6th game in a row where Everton will be playing a bottom half of the table team. Liverpool’s struggles this season have been well documented. And there will be plenty to read in the next few days, both on this site and elsewhere, for those of you who want to take gleeful delight in the pain of the cross town rivals. Today, though, we’re actually going to look at the game and see how the two sides line-up tactically and what to expect from the actual on the field portion of the game this weekend.

First things first, let’s get the Everton team selection issues out of the way. I expect Fellaini to be back, and I think we all understand after QPR how important that will be. Secondly, with Pienaar missing out, I expect Mirallas to move over to the left side and pair with Baines. The interesting choices, as always, involve the middle and right side of the field. It’s been a long time since Gibson has played a competitive game, and with his injury now stretching to almost 7 weeks I find it hard to believe that he will be ready to go the full 90. In other injury news Tony Hibbert played the full 90 minutes for our U-21s on Monday and seems ready to go. Adding it all together it looks like Neville and Osman will be manning the midfield yet again, but on the right Moyes can chose to stay consistent with Coleman in defense and slot in Naismith (or Anichebe…but please no) in front of him, or he can move Coleman up to the midfield and bring Hibbo back into the team.

Given those options, I’d rather the more defensive one. Here’s why I want to see Hibbert starting behind Coleman. Liverpool are not a high octane offense. They create goal scoring opportunities in very limited ways. Basically, Louis Suarez plays alone up front and gets the ball played into his feet thanks to very clever movement (it also helps that he is an undeniably top level talent at flopping which makes defenders leery of going near him). Or, Suarez is a decoy who sucks players into the middle of the pitch opening up room for left winger Raheem Sterling, who spends much of his time playing centrally. As you can see those players get an awful lots of touches on the ball. 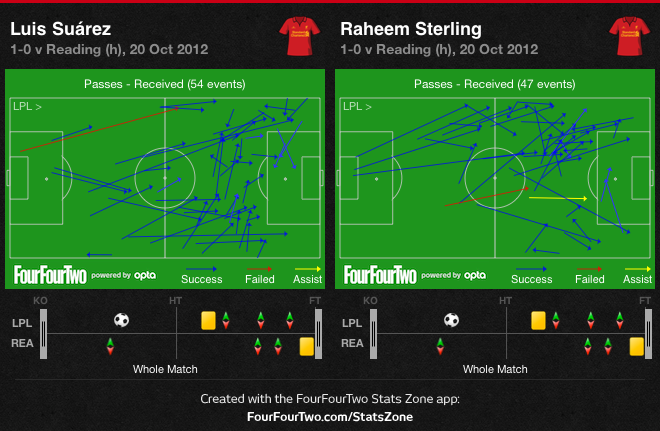 Nail down the right flank, and you really only have to do one other thing to cripple Liverpool. That’s where Fellaini comes in. We’ve talked a lot this year about how good the big Belgian has been offensively. But, one of his biggest contributions this weekend will be on the defensive side of the ball. Liverpool relies on Joe Allen to an absurd degree. He sits deep in the midfield and keeps the attack ticking over. He’s very good at moving to the ball, and playing short passes in tight places. You can see how much he touched the ball against Reading, and they were a team that didn’t put up much of a fight. He will be even more prominent against an Everton team competing much harder and more efficiently defensively. It will be Fellaini’s job to make Allen’s life miserable. Expect Fellaini to be tasked either with closing down the ball aggressively and preventing passes from being played to Allen, or with sticking to Allen extremely closely and preventing him from consistently completing passes out to the other legs of the midfield triangle, Gerrard and Sahin. 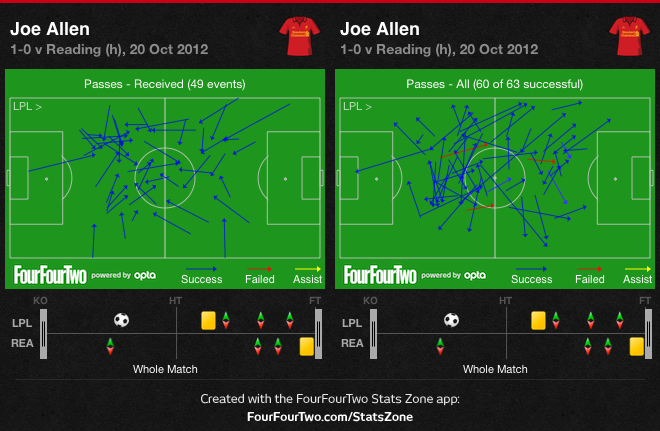 Defensively that’s pretty much all that’s necessary. Offensively I expect Everton to have a lot of joy. Liverpool play a pretty traditional 4-3-3 system. Rodgers wants his wingers to remain high up the field and not track back behind the ball defensively if they don’t have to. And quite frankly given how young Liverpool’s wingers are that’s smart because I wouldn’t trust Sterling and Suso to defend in important situations either. But, thankfully for Everton, that’s the exact opposite approach of the teams that have stymied Everton and Fellaini this year. Wigan, for example tilted their centerback, right back, right winger, and right central midfielder into Fellaini’s area of operation. They contested in the air, and congested on the ground. Liverpool won’t do that. Their midfielders stay central, and their wingers stay high up the pitch. That should give Fellaini, Mirallas, and Baines tons of room to work their magic.

Look, we all know what Everton intend to do offensively. It’s not a secret. I don’t need to overload you with charts and graphs, you see it every week. Start with the physicality of Fellaini and then transition into the skill of the wing players playing off of him. It’s worked all year. The only teams that have been able to slow that game plan down are bigger physical teams willing to crowd the defensive third. That’s the opposite of this Liverpool team. So, in a game where the Toffees known offensive quantities should be enough to get the job done, I don’t want to take unnecessary risks at the back. Play a smart solid back four to make sure you don’t get exploited, and then do what you do best to win the game. We’ll see if Moyes agrees with me.