David Moyes experimented with Steven Pienaar's positioning in the first half of Everton's game against QPR. It didn't work. Not even a little bit.

Regular readers of this site, and the tactics pieces in particular, know that I am one of the biggest David Moyes fans around. Supporter, apologist, cheerleader, I do it all. That’s why the first half of the game at QPR was so disappointing. Moyes completely and totally missed with his tactical decisions, and that, as much as Pienaar getting sent off in the second half, is what cost Everton the full three points on Sunday. Although he didn’t make drastic personnel decisions Moyes certainly tried a dramatic change in formation and style, and that’s what I’ll focus on today.

When the lineups were announced it seemed like Moyes had made an obvious, albeit conservative choice. He brought in Anichebe in what looked like a straight replacement for Fellaini and we expected the team to lineup like this.

Except, for the second time this year (the first being Coleman’s debut in defense) the side came out shaped completely differently than expected. The lined up with Pienaar centrally and played basically an attacking 4-3-3/4-5-1 hybrid.

It’s a dramatic difference. Just to nail the point home, compare how they lined up in the first half to how they looked in the second half against Wigan (the only other time this year when Fellaini was not playing a basically center forward role). 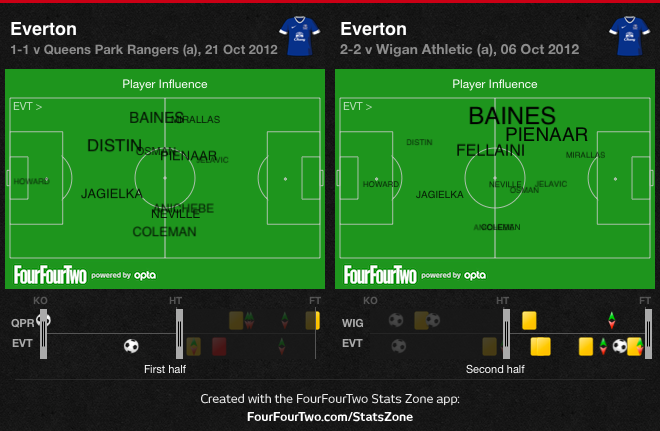 It’s not hard to imagine what Moyes was thinking. Despite a pretty lively second half at Wigan he knows he has a creativity and possession problem in the midfield. Without Fellaini in the mix to bypass that problem he moved his most creative player with the ball at his feet into a more central position in the hopes he could serve as the hub transitioning defense into attack. Pienaar’s role was probably intended to function in one of two ways. Either he was being expected to play as a traditional attacking midfielder, drop into spaces just in front of the backline and use that space both to look for his own shot and to pick passes for the three attackers in front of him. Or he might have been expected to play as something of a central winger. That is, drift out to the wing on whichever side the ball is, and combine with the fullback and winger there to create overloads in those areas. My hunch is that in an ideal world Moyes wanted Pienaar to do the latter, and deployed him in the center so that he could in effect use his winger’s skills on either side of the pitch.

We’ll never really know though because the players didn’t take to the system at all. They were a muddled mess of a group who were unable to maintain composure on the ball and string together passes. If there was a plan of how to get the ball into Pienaar’s feet it never materialized. The midfield base was never able to get the ball forward to him. The chalkboards below, which show the passes from the two midfielders to Pienaar in the first half, aren’t exactly overflowing with blue lines. 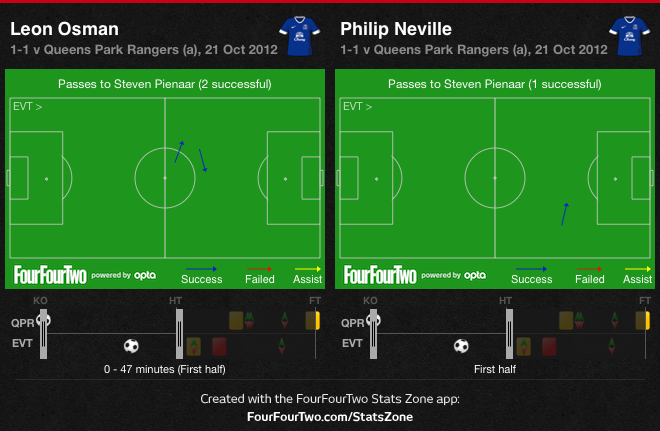 The worst part was that the game plan completely nullified Leighton Baines. All too often he was the only pass that the unimaginative midfielders could pick out, so he was constantly receiving the ball in his own half and never really had the chance to get forward. Even playing a large part of the second half with ten men, Baines was much more dangerous after the break. That’s because Moyes scrapped the new system and went back to his more conventional 4-4-1-1, which obviously eventually turned into a 4-4-1 after Pienaar’s dubious dismissal. The difference between the two halves is like night and day. Look first where he received the ball, and that at the passes he played. The two halves have nothing in common. 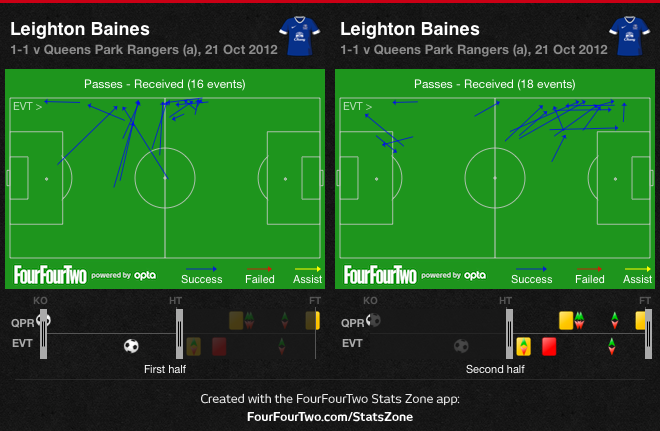 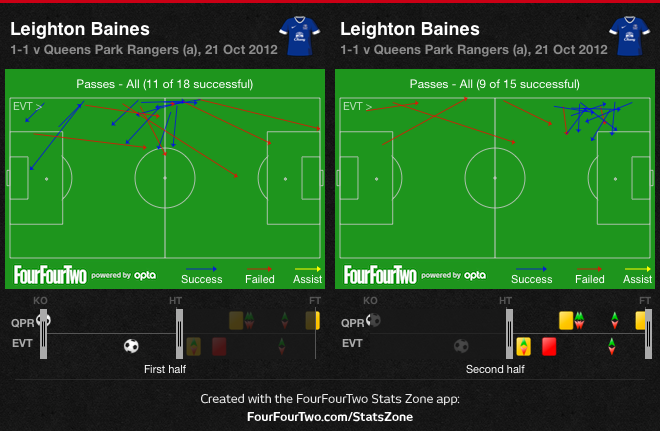 Clearly, I wasn’t a fan of the way Everton attacked QPR in the first half. Moyes out thought himself and sent his team onto the field with a gameplan that they were simply not able to execute. Now, that said, we have to address the reason that Moyes felt he had to take such extreme action. The two players in the middle of the pitch are simply not good enough for their roles. Leon Osman is really good at getting forward into dangerous areas from deep positions. That’s valuable. He’s also a sound positional defender, he doesn’t typically get passed around all that easily, even if he isn’t a traidional ball winner. What he doesn’t have is a wide passing range that can get the ball out to the players who need it at their feet. He has, much like Phil Neville who I’ll get to in a second, a safety first passing mentality. It leads to a very high completion rate but does nothing to transition from defending to attack. That skill set is fine for playing off of a target man like Fellaini, but not for being the foundation of an attack along the ground.

Neville has the same passing mentality, without any attacking skill set whatsoever. That’s supposed to be offset by his defensive abilities. Except that defensive ability at the moment seems to be mostly mythical. In a game where Everton spent over half an hour playing down a man, Neville attempted precisely zero tackles, blocked zero shots, cleared the ball with his feet zero times, cleared the balls with his head zero times, and intercepted one pass in each half. So, what role is he playing exactly? Overall, I’ve spent the beginning of this season being more or less resigned to having to see Neville on the field. After all, without Gibson what other options are there? But at this point, if Gibson isn’t healthy enough to play, it’s time to start looking further afield for options. From a baseline standpoint, Heitinga can’t possibly play more conservatively than Neville in that role. And, while I remain thoroughly unconvinced that Hitzlsperger will ever make a real contribution, or that Francisco Junior is anywhere near ready to play for the first team, at some point Neville’s performances have to force Moyes into trying them anyway. After all, they could hardly be worse.

Still, and I’m beginning to sound like a broken record here week after week, a draw on the road isn’t the end of the world. They gave up a very early goal, lost a man for the majority of the second half and still managed to walk away with a point. With Spurs and West Brom losing that means Everton is in sole possession of 4th place. It’s hard to complain about that.