Well, that was a very blah game. Another draw against another team in the relegation zone can only be considered treading water at best (even away from home), but with the injury bug starting to bite perhaps it's best to look at the positives. Everton were able to fight back from a goal down and then dealt with going down a man reasonably well, so at least it wasn't a total disaster. A full report from the capital is ahead...

- A pair of corners were awarded to Everton to start the game, but the second quickly developed into a nightmare as Junior Hoilett grabbed the ball and proceeded to maraud down the length of the field with Everton's defense scrambling to catch up. It seemed like the defense had caught the Canadian, but Hoilett's eventual shot was deflected by Leighton Baines and looped agonizingly over a helpless Tim Howard. Everton were down a goal and not even two minutes had elapsed from the clock.

- Everton found the equalizer some thirty minutes later, as Steven Pienaar took a free kick from outside the box and found an unmarked Sylvain Distin right in front of the goal. QPR were clearly trying the hold a high line, but the strategy came back to bite them as Distin was clearly onside. Due to a bit of bad luck, the goal would go down as an own goal charged to the goalkeeper Julio Cesar, but ultimately Distin and especially David Moyes didn't care one bit. The Toffees were again on even footing.

- Everton were the superior team in the opening minutes of the second half, though they never really built off of that pressure to create something substantial. Cesar batted away a cross from Baines, and later Phil Jagielka attempted an ambitious volley that landed comfortably in the sea of fans.

- Not long into the half QPR were kicking themselves for not making more out of a terrific chance for Park Ji-Sung. After some wonderful play from Samba Diakite worked the home side into a dangerous position, the ball was sent into the penalty area for Park with Howard's abandoned net gaping invitingly. Fortunately for the Toffees, Jagielka was there to tie up Park and deliver a mammoth block at the same time. A game-saving play from the defender.

- Jagielka appeared to be nursing a stomped finger after that exchange, but fortunately you don't need to use your hands much in this sport. Steven Naismith was introduced for a mostly ineffective Victor Anichebe, a move I would have liked to have seen from the beginning of the match. We're never going to know what we have in Naimsith if we don't ever play him (and granted, we might not have much).

- Meanwhile, Pienaar was behaving badly, picking up a yellow card early in the second half for a hard tackle and later receiving a stern talking-to from referee Jon Moss after a similar tackle. Up to that point, I would agree that Pienaar was living on the edge and had only himself to blame for the precarious position he found himself in. However, the play Pienaar ended up getting sent off for was ridiculous. Admittedly, Everton were sloppy to turn the ball over in their own half, and in an instant Pienaar was hot on the heels of Jose Bosingwa. In a true Oscar-worthy moment, Bosingwa went down theatrically under virtually zero contact. But Moss had made up his mind, showing Pienaar a second yellow and sending off the midfielder.

- As so often seems to be the case, the team just reduced to ten players seemed to up their game in order to make up the difference. Everton looked like they might still have a goal in them, and Kevin Mirallas generated a decent effort when his difficult header sailed wide of the target. Bobby Zamora shot into Howard's arms at the other end, and then Mirallas had an even better chance when his shot was helped over the bar off the head of former Everton target Stephane Mbia.

- On the ensuing corner, the ever-present Jagielka was set up for a header from pointblank range, but Cesar did brilliantly to keep the ball out. The ball found its way to Jagielka again, but this time Mbia was there to block the shot away. Nikica Jelavic found the rebound and looked like he might finally give Everton the lead, but his cross (shot?) was wayward and ended Everton's best threat after Pienaar's red card.

- From then on, Everton seemed to concede the two extra points a win would bring and focused on protecting the one they had earned to that point. Consequently, QPR dominated the chances, though they never really found that one golden opportunity. Hoilett had a shot touched aside by Howard, and Esteban Granero was wasteful with another chance.

- The final talking point was a fairly legitimate penalty shout for the home side when Seamus Coleman appeared to clumsily bring down Hoilett in the box. Thankfully, Moss decided that it was not a clear foul and no penalty was awarded.

So make it two points from two away games at league cellar dwellers. Really good teams probably take four points from games like this, but as we saw yesterday with Norwich and Arsenal sometimes a team backed into a corner can be difficult to contain. Unlike Arsenal, at least Everton grabbed a point to keep spirits up headed into the derby. The biggest disappointment from this game might be the revelation that Steven Pienaar will be unavailable for selection next week after picking up his second yellow card (unless it is rescinded, of course). I don't envy David Moyes's midfield options ahead of the Liverpool match, and the situation will be even more dire if Marouane Fellaini and/or Darron Gibson are not deemed fit in time for the game. Keep it right here at Royal Blue Meysey throughout the week for all of the latest news and full coverage ahead of the 219th Merseyside derby. 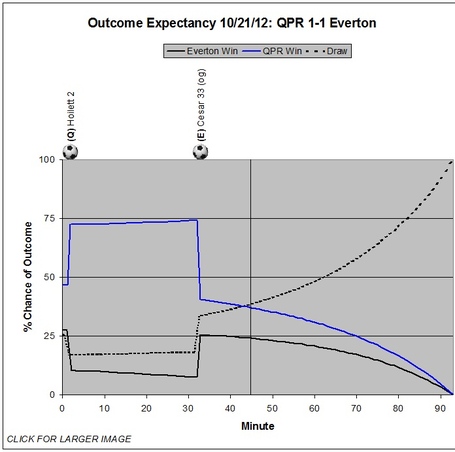