Against Southampton Everton was forced to resort to playing through the right wing of the squad for the first time. It was a dramatic success.

Yawn. Another week, another 3-1 victory over an inferior opponent. Nothing to see here move right along. Actually, that’s a big fat giant lie. There’s a lot to see here. For the first time Everton were forced to move away from the hair centric battle plan they’ve relied on, as Southampton focused on taking the long ball to Fellaini away. So, in today’s tactics piece I’m taking a look at the rise of Seamus Coleman and Kevin Mirallas as plan B. And what a plan B it was.

Let’s put the first half of the game under the microscope. The first 45 minutes were like watching two entirely separate games, divided at the 15 minute mark. Everton came out trying to do what they always do, go long to Fellaini, and build from there. It didn’t work. Southampton was clearly determined to take that option away. Just look at their positioning over that time period. The right-winger and right central midfielder were clearly directed to stay in that zone and help the two right sided defenders clog up Fellaini’s office. 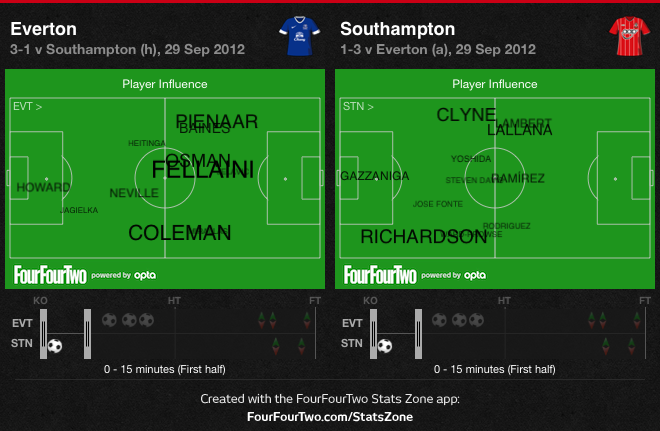 So, after 15 minutes, already down a goal thanks to some poor work from Tim Howard on a cross, Moyes dramatically shifted the tactics. Look at the difference in balls played to Fellaini in the first 15 minutes, and compare it to the rest of the half. It starts off like normal, 12 passes received, a full quarter of them being long balls to his favorite spot on the left wing. But, in the next half hour of the 20 passes he got, only 2 were those traditional long balls. Instead Everton began to pass it out of the back.

It wasn’t a smooth transition. At first the absence of Darren Gibson seemed like it was going to rear its ugly head once again. When a team is keeping the ball on the ground and trying to work it forward naturally the central midfielders are going to have a bigger impact on the game. And, as we all know, Phil Neville is not a good distributor of the ball. There were definitely moments when Neville (who’s 49 completed passes were second only to Leon Osman’s 64) ground attacks to a screeching halt. But, gradually Kevin Mirallas dropped from his right wing position into the empty spaces Southampton had left in the middle of the field, and replaced Neville as the initiator of the attack. As you can see below it looks like 9 times in the course of that half hour Mirallas received the ball around the central circle, and there was plenty of space for him to exploit. He passed efficiently, assisting on one goal, creating a second from a cross, and playing an important part in freeing Coleman to put his cross in for the third. 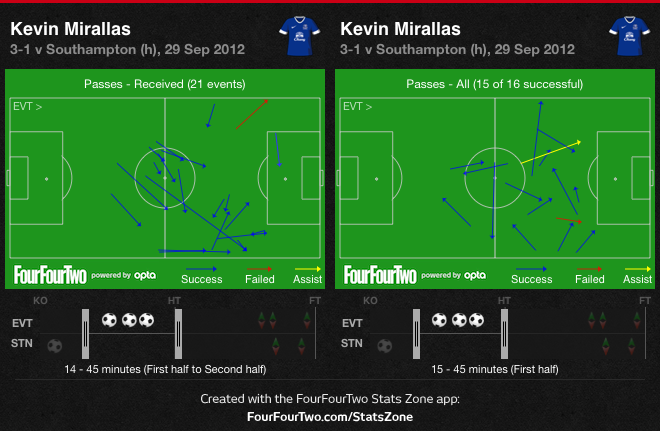 Speaking of Coleman, his importance in the attack can’t be overstated. The big concern when a winger starts playing so centrally is that the attacking team will lose width. Without the winger stretching the field, defenses, even if they are under manned, are able to clog up the middle and foil attacks. But, Coleman is very very good at bombing forward and providing the width that is lost when Mirallas cuts inside (much like every Everton fan is used to seeing from Baines and Pienaar on the opposite side of the pitch). It’s a little hard to capture in numbers, but perhaps the best way to see it visually is to look at the difference in positioning between the first 15 minutes and the last half hour of that first half. In the first picture above, you can see that while in the first 15 minutes the focus was on getting the ball to Fellaini, Coleman actually did have a lot of touches, its just there was no real way for him to do anything productive with it. Mirallas was positioned almost right on top of him making his best passing options going back to Neville or the defense. He only completed 3/7 passes in that time period, and one was all the way back to Tim Howard. But, after that the spacing becomes much better, as you can see down below. In fact from left to right, Baines, Pienaar, Fellaini, Mirallas, and Coleman almost look like a bank of 5 attackers sitting right behind Jelavic. And on the Southampton side, they just never adjusted to the balance. Defensively they still have their right side (Everton’s left) overloaded, but at the same time Coleman’s presence is keeping the opposite winger and fullback from pinching into the middle. That’s why Southampton left so much empty space in front of Yoshida to work in, which Mirallas exploited. 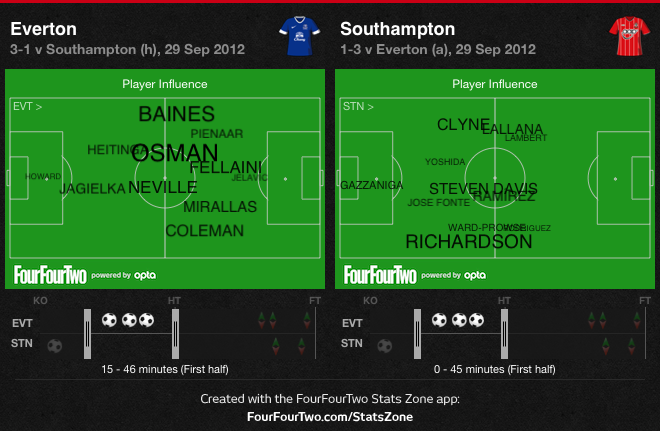 It does raise a really interesting question though. Eventually we all expect Darren Gibson to come back into the team for Neville. Gibson is a good consistent passer, and a solid but not spectacular positional defender. He doesn’t have the deficiencies that Saturday’s strategy was employed to cover for, and at the same time he won’t be nearly as effective covering for Coleman at right-back as Neville is. So, how will Moyes handle the situation? I am skeptical as to whether we will see Coleman as a defender without Neville on the field, and after Saturday I’m starting to be convinced that a Mirallas, Coleman, Neville trio might actually be a better attacking grouping than a Mirallas, Neville/Hibbert, Gibson trio. But either way the continued development of the Mirallas, Coleman right side of the field (Miralman? Collas? It’s just not the same as Bainaar) has given the manager yet another dangerous attacking option. All of a sudden it seems that Everton is overflowing with them.