Coming off of the international break Everton will be without breakout star Marouane Fellaini. How do they plan to replace him?

Propecia, in case you are wondering, is a hair replacement drug. Everton could do with a big dose of it this weekend as they try to replace Marouane Fellaini in their away tilt against QPR. So, without a game to review this week let’s take a look at how Everton is likely to lineup this weekend and what that will mean tactically.

The first question that needs answering is who will pair with Jelavic up top in Fellaini’s absence. There are three main options. The most obvious choice is Kevin Mirallas. In the only half of football all year that Fellaini has not played as a second striker (the second half against Wigan when he dropped into central midfield) Mirallas took over that role and handled it admirably. He scores goals, is comfortable with the ball at his feet as well as making runs into space, and he has great pace to challenge defenders. The problem is that there are not a lot of replacement options for him at right midfield at the moment, which might make it hard for the manager to move him. If not Mirallas then the other two options would seem to be Victor Anichebe or Steven Naismith. Anichebe has had quite a good campaign so far and did an admirable job filling in for a dinged up Jelavic earlier this year. Naismith on the other hand has yet to make a meaningful contribution since Moyes brought him in over the summer, but it’s possible that’s because he hasn’t had the opportunity to play in his preferred role off of a central striker. It’s also possible he just isn’t that good.

Regardless of who gets the nod we can safely say a couple of things about how Everton will play. First and foremost we can expect a much lower completion rate on long balls. Looking at the Wigan game again you can see a clear difference between the first and second halves. The first half looks like a typical Everton half with lots of long balls being successfully received on the left side of the attacking third, and that’s despite Fellaini having a bad game. But, in the second half when the attacking duo was Mirallas and Jelavic, the passes were spread more evenly across the whole field and they were significantly less successful. 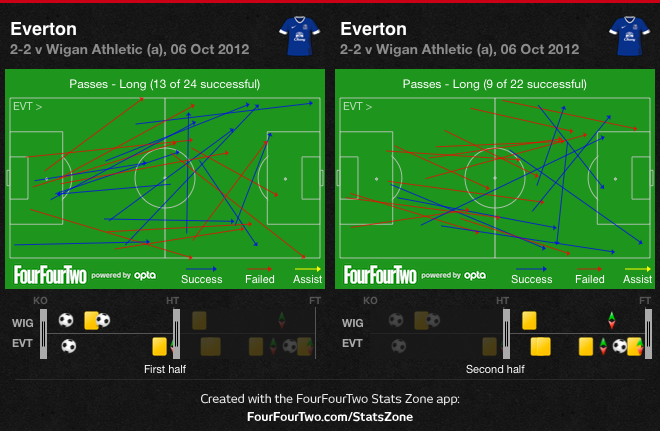 Actually the placement of the long balls brings up an interesting point. Talking about who will replace Fellaini is a little misleading. In a lot of ways Jelavic is the Fellaini replacement. The way he received the ball dramatically changed between the two halves at Wigan. As you can see, in the second half he took up the role of target man (although mostly on the opposite side of the field). When he plays with Fellaini, Jelavic’s role is to be the most advanced player on the field, get into dangerous areas and score goals. With any other partner (perhaps with the exception of Anichebe) Jelavic becomes the target man, with his partner moving into more advanced positions. 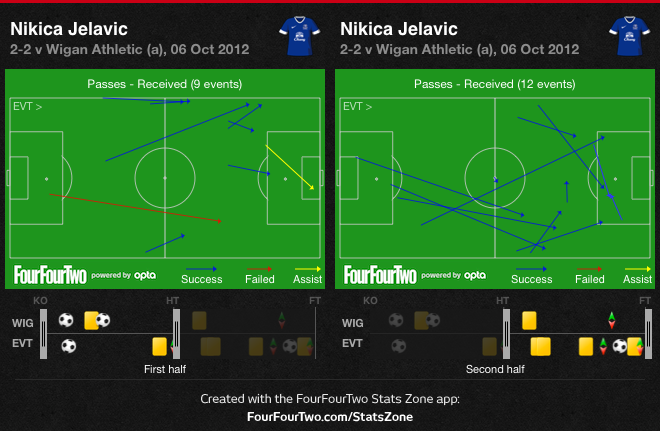 The influence map from the second half of the Wigan game highlights that fact nicely. Mirallas is clearly the most advanced player, while Jelavic has dropped back deeper to be a target for long balls. 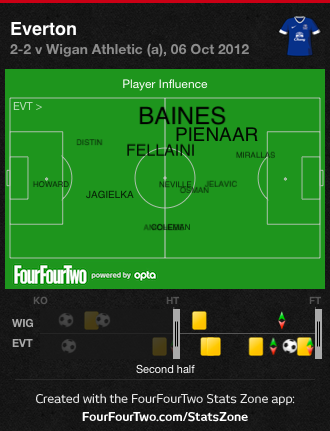 Clearly some things will be different. Others though will remain exactly the way we are used to them. Despite not being a target man, Mirallas was as willing and able to combine with the two headed Bienaar beast as Fellaini was. Below are both the passes Mirallas received and those he played in the second half against Wigan. It’s pretty clear from those lines that he set up shop more or less where Fellaini does as the hub around which Baines and Pienaar move. I would expect whoever starts this weekend to be positioned similarly. 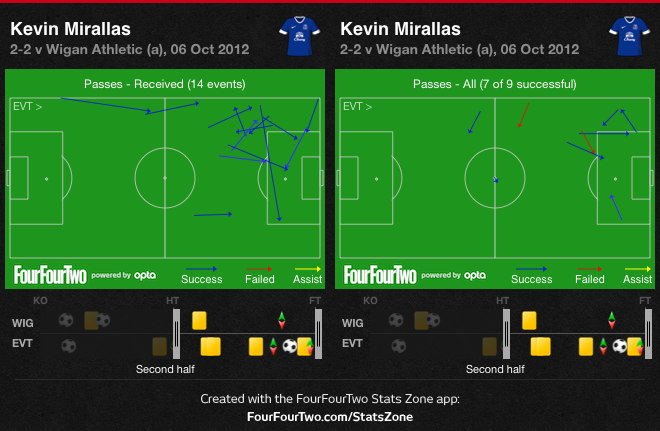 The last point has to do with the midfield. Fellaini’s dominance has in large part covered up a midfield that is lacking in passing prowess. The loss of an efficient midfield distributor isn’t keenly felt when the offense is initiated by launching the ball over the midfielders’ heads. But, without Fellaini to initiate more of the creative attacking burden has to fall on the midfielders’ shoulders. Darron Gibson is the player who naturally fills that role, and while he looks as though he is getting closer to fitness, it has now been a month and a half since he’s played. Even if he’s healthy it seems unlikely that he’d feature for the full 90 minutes. That probably means Moyes will have no choice but to send Phil Neville out there again. This time though expect his lack of forward passing to be an even more noticeable problem.

With Neville forced to remain in the midfield and Tony Hibbert still struggling with his calf that means Coleman is likely to remain at his new home on the right side of defense. That leaves very few right wing options. Like Neville, Osman seems locked in the central midfielder role with no viable cover, which means he can’t move out to the flank. That leaves only Mirallas, Naismith, Anichebe or, if Moyes is feeling particularly experimental, the little used but occasionally effective Magaye Gueye as options.

It’s a thin bench at the moment to be sure. That’s why, even though Mirallas is the best option to partner Jelavic, I expect him to remain on the right, with Anichebe coming in for Fellaini. That said, Moyes has been full of surprises all season, and might have another one up his sleeve.

So, what does everybody else think? Who do you expect to see out there this weekend?