I could start this report off with any number of snarky comments about "the magic of the FA Cup" and the relative quality of this match, but you know what? I don't really feel like doing that today because I love the FA Cup. There, I said it. Sue me. I love watching the minnows go up against the top teams, I love watching the final at Wembley, heck I even love seeing pictures of crazed fans dressed up in lamb costumes (okay, maybe "love" is too strong a word for that last one). Sure, this game was far from a classic but Everton are through, unconvincing as it was. More stuff after the jump...

- First things first, this match report is going to have to be abbreviated. I (along with pretty much anyone not at the ground) had to make do with audio commentary only, and without the pictures I really don't think it's fair to offer player ratings or much in the way of in-depth analysis.

- That being said, so many players sounded poor today. In particular, Marouane Fellaini and Diniyar Bilyaletdinov seemed as if they would really rather be doing anything else other than trying to win a football game. Fellaini, I suppose, could be given the benefit of the doubt as it was his first game back from his abductor strain. Bily had a decent long-range effort late but misplaced numerous passes throughout the game, and I can't help but think this might have been his Everton swan song. How much could we get for the Russian? I think £5m might be optimistic.

- Yet more injury trouble for the Toffees, as Seamus Coleman was forced off ten minutes into the second half. It was unclear if the problem was another recurrence of the groin injury that sidelined Coleman previously, but if it was then that would make it twice now that Moyes has tried to rush the Irishman back into action only to be forced to prematurely remove him from the match. For those keeping track, here are the Everton players currently injured: Tony Hibbert, Phil Jagielka, Ross Barkley, Leon Osman, Seamus Coleman, and Jack Rodwell.

- I thought it was telling how negative the usually pro-Everton commentators were on the official site's radio broadcast. It almost made me glad I couldn't see the match.

- Probably the biggest talking point to come out of today was this video (h/t School of Science 1878) showing Chairman Bill Kenwright arriving at Goodison for the match. Kenwright, when confronted by a band of Everton fans, declares to the camera that "the Blue Union have betrayed this club." Wow... poor choice of words there Bill. This won't go down well, and I'll leave it at that. 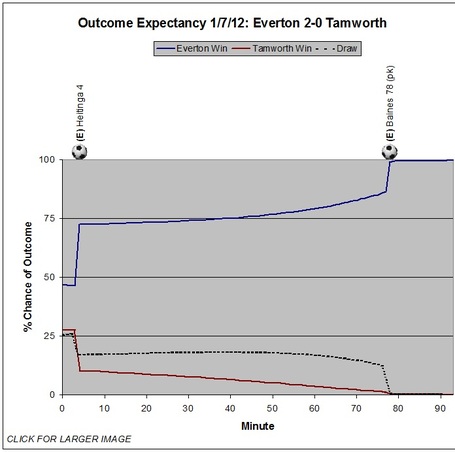