Share All sharing options for: The Best and Worst of the 11-12 Blues

As I was watching the match versus Blackburn last weekend, pondering the state of our beloved club and the general despondency of the fans, it occured to me that there must be some way to quantify the declining quality of our performances. Sure, we all moan and groan about the negative tactics and the boring football, but how do we accurately determine what is a good result and what is a bad result? (besides our own loudly-stated opinions, of course)

For example, when the Blackburn game finished 1-1, it was rightfully bemoaned as two points dropped. However, if we hold Man City to the same scoreline next week, it will likely be celebrated. What we need is a way to analyze results more objectively.

Check out this table. (click on the image to enlarge, or a Google Doc of the data can be found here) 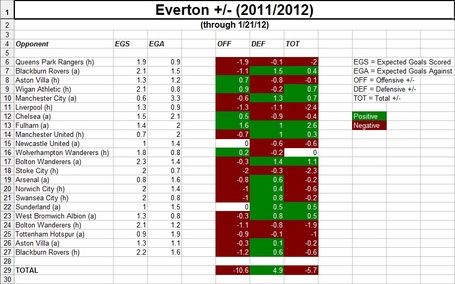 So... what the hell does this tell us?

Well, for each match Everton have played this season, I determined how many goals they should have scored and how many goals they should have allowed (EGS and EGA in the table). This was done simply by figuring out the average number of goals per game each of our respective opponents has scored and allowed this season (a disclaimer: only Premier League data was used, and home field advantage was taken into account as well). Then, I used the actual result to determine if we performed above or below average.

For example, in the opening game against QPR we should have scored 1.9 goals and allowed 0.9 goals on average. In reality, we scored 0 (a -1.9 rating) and allowed 1 (a -0.1 rating) for a total performance rating of two goals below average.

Notice any patterns? The most damning trend, I think, is that Everton have not posted an above-average offensive output since the game against Wolves on November 19. For those counting on their fingers, that is well over two months ago! Overall this season, Everton has scored 11.6 fewer goals than just an average team would have been expected to score given an identical list of fixtures.

How do we grade out defensively? Pretty good, actually. After a bit of a rocky start, the defense has rebounded nicely over the last dozen or so games, including a nice streak of five straight above average performances (and seven out of nine if you want to extend the run further). Overall, we are 4.9 goals above average defensively. However, you'll notice a lot of red in the second half of that last column: the total performance rating, combining both offensive and defensive stats. The data doesn't lie: we have consistently played below expectations for much of the year.

According to the table, Everton's three best performances of the season have been:

Not a lot of super-inspiring games on there. I think the fact that one of our best performances of the season was actually a loss says a lot about how we have played so far this year. Here, on the other hand, are the three worst performances:

So... who's to blame for these numbers? While some may scream for the manager's head, I would have no idea how to begin analyzing the impact of David Moyes or any manager for that matter. However, it is fairly simple to come up with offensive, defensive, and total +/- numbers for each player. Take a look at the table below, or refer to the same Google Doc linked at the top. 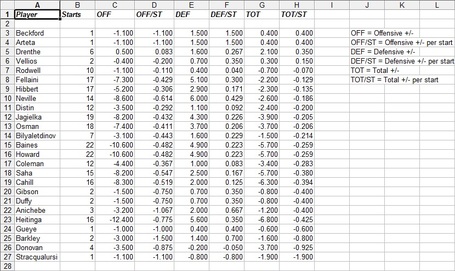 First of all, it's probably wise to throw out the small sample sizes. I wouldn't look at anyone with less than ten starts very seriously, because there simply isn't enough data to give us an accurate analysis. But for those who have played consistently, the results are pretty interesting. Jack Rodwell is our overall most-effective player, closely followed by Marouane Fellaini and Tony Hibbert (!).

However, it's a good idea to look more specifically at the offensive and defensive ratings. From this angle, it becomes obvious that Tim Cahill and Louis Saha have been pretty awful at contributing to the attack, while Phil Neville and John Heitinga have done a good job of holding the opposition at bay.

All of this should be taken with a giant grain of salt. It's not a perfect statistic by any means (particularly when using it to evaluate individual players), but it does show where Everton have gone right and (more often) gone wrong this year. It will be interesting to run this again at the end of the season to see how the final results have changed.