There's nothing quite like Fulham at home to lift Everton out of the doldrums, and thankfully the two teams stuck to the script Friday night under the Goodison lights. The victory propelled Everton into the fifth round of the FA Cup, the draw for which will be held on Sunday evening. With Manchester City and either Manchester United or Liverpool already exiting the competition, hopes are high for a sustained cup run for the Blues. A celebratory match report is after the jump...

- The absolute number one key to this match (besides maybe the need to put a few in the back of Fulham's net) was to shut down the on-fire and on-form Clint Dempsey, and the Everton back-line did that job brilliantly today. Dempsey never really even sniffed a chance, and a big part of that was the defending of John Heitinga and (to a lesser extent) Shane Duffy. Similarly, Andy Johnson was quieted for the most part as well, so if we're grading the defense from after the penalty onward then they deserve full marks today.

- I suppose I have to say something about the penalty. Trying to remember back, I believe it was Duffy who fell asleep at the back and allowed the looping pass that had Fulham off and running. Anyway, the person or persons who let the play develop initially are far more to blame for what happened than Heitinga, whose arm got in the way of Damien Duff's shot. Was the penalty correctly awarded by Howard Webb? Yeah, probably. Heitinga threw his arm up and by the letter of the law that's the right call. Besides, after the gift Webb gave us in the Boxing Day match we really can't complain.

- That was just a sensational goal by Marouane Fellaini. The way he had to lean back for the pass and was still able to put a ton of power and accuracy into his header, all while off-balance and moving away from goal, was phenomenal.

- Also, Landon Donovan probably played his best game since his return to Merseyside. He was lively, ran at defenders, and most importantly set up both of Everton's goals. The first was the most impressive, as he could not have placed his cross any more perfectly for Denis Stracqualursi to head past David Stockdale for Stracqualursi's first goal for the club. We really need to take advantage of the width Donovan provides over the next month, because it's something we're really going to miss when he returns to MLS.

- It was pretty funny to watch the big Argentine overcome with emotion at having finally gotten himself onto the score sheet as a player in England (he gives me the impression that he has a screw loose in there somewhere, but that's part of the humor in watching him play I think). I still believe Stracqualursi is best utilized as an aerial threat off the bench though, because that first touch remains a big problem.

- A note to the announcers who called the game on Fox Soccer: It's not HeiTINGa. It's HeitinGA. Gah, drove me nuts! JP actually does a decent job with national team games (Wynalda is a hack), but when you butcher players' names like that it doesn't do much to improve the (deserved) reputation of American broadcasters.

- Finally, it was nice to hear Goodison actually rocking again, even it was just against Fulham in the FA Cup. The relatively quick answer to the Cottagers' goal was huge in that aspect, and from there it seemed like the team was up for the challenge of going on to win the match and the fans were right behind them. Now let's just see if we can keep that spirit up when City comes calling next week...

T. Howard - Had little to do other than pick a penalty out of his net and yell at his back-four to stop giving him those annoying back-passes from fifteen yards away. 6
P. Neville - Did a more than decent job pushing the ball up the right flank to Landon, and if Tim Cahill could hit a target from five feet away he would have had an assist as well. 7
S. Duffy - Regressed a bit today; not quite as assured. I'm still enthusiastic about his prospects. 6
J. Heitinga - Handball aside, did a great job hounding Dempsey and making sure Fulham were denied any dangerous opportunities. 8
L. Baines - Didn't have a great evening. His crosses were mostly sub-par. 5
L. Donovan - Two Everton goals, two Landon Donovan assists. Not perfect by any means, but the service he provided today won us the game. 8
D. Gibson - Steadily improving with each game, he kept things ticking in midfield. It will be interesting to see what happens when Rodwell is available for selection. 7
M. Fellaini - Very positive and looked up for this one right from the start. That header was a thing of beauty. 8
M. Gueye (Drenthe 67) - Played a couple of really nice balls, but could have done better at times (like when the ball fell to him from pointblank range in the box). 5
T. Cahill - What to do with Tiny Tim? How he didn't deposit that Phil Neville cross into the back of the net I'll never know, and too often he left his striking partner stranded at the top. 5
D. Stracqualursi (Anichebe 82) - Scored a good goal (and let's be honest, we all knew he would score his first with his head). Tired toward the end and perhaps picked up a knock. 7

R. Drenthe (substitute 67) - Made Fulham nervous a few times with his pace. 6
V. Anichebe (substitute 82) - Can't remember anything he did. N/A

Man of the Match: Landon Donovan 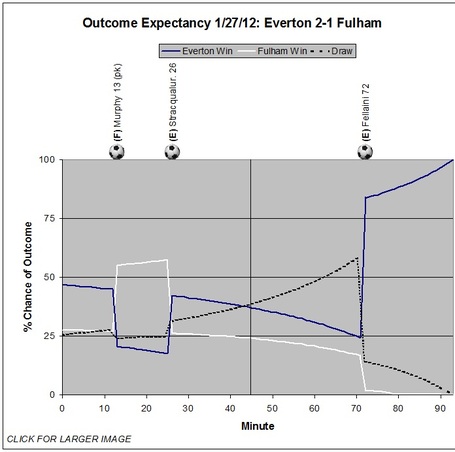