Not the atmosphere you generally want to create at your home ground, but that's what happens when you win just three of your first eleven home fixtures. I think at this point we can say with confidence that the home form of the Toffees has gone from a nagging worry to a full-blown crisis. Consider these results: lost to QPR, drew with Villa, lost to Stoke, drew with Norwich, lost to Bolton, drew with Blackburn. That's 15 points dropped right there, and that's simply not good enough for a team that has prided itself on making Goodison Park a fortress in past seasons. If Everton had recouped just ten of those points, they would be tied for fifth place. That is astounding to me.

More on the match with Rovers after the jump...

- TIM CAHILL KICKED A FOOTBALL AND IT RESULTED IN EVERTON SCORING A GOAL!

- And I couldn't feel happier for the guy. Of course, it still doesn't change my opinion that it's probably nearing the time for Cahill to move on from the club, but for one moment it was just like old times for Everton: Cahill lashing the ball into the net from close range, the Australian celebrating at the corner flag in trademark fashion, and the Blues taking a 1-0 first-half lead against an inferior opponent at home. I also loved how you could see the support of his teammates and how much it meant to all of them. In a season lacking in memorable goals, that one brought a smile to my face.

- While I think that Victor Anichebe has the ability to play out wide in a pinch, when there are actually alternatives on the bench I think there's no need to force the issue. Magaye Gueye and Royston Drenthe both could have started, and Drenthe did much better than Victor after he was brought on early in the second half.

- I will admit though that Drenthe consistently seems to have better energy and more of an effect on the game when he's brought on as a substitute. Yeah, you could probably say that about most any player, but Drenthe in particular seems to have that extra burst when he's introduced later in the match. Ideally, you would have a strong enough team to utilize Drenthe as a super-sub talisman, but with the squad depth we have he's going to be pushed into the starting eleven more and more.

- I really don't know where to begin in analyzing Blackburn's goal. I suppose the blame has to fall on Tim Howard for his inability to make the catch, but really I thought that it was a pretty fluky goal and that Tim Cahill was quite unlucky to fire his clearance right into the path of the oncoming David Goodwillie. Also, there was a question of whether Howard was fouled by a leaping Steven N'Zonzi, so overall I really don't have too many complaints about the defending.

- What I am going to complain about, however, is the total lack of urgency Everton showed after going 1-0 up. Really, the entire game gave off the aura of a leisurely morning stroll more so than a Premier League football match. Blackburn came to play a strong, positive game I thought, and Everton just weren't up to the challenge of matching their willpower and hunger. The Blues were awfully fortunate to make it to the break a goal up, but it seemed like they failed to realize that and were unable push the tempo in the second half. Unfortunately, it's become a worrying trend this season: Everton allowing the opponent to dictate how the match is played, rather than forcing the opponent to conform to their game plan.

- With all of that being said, Everton could have snatched all three points at the end, but a frantic series of goal-line clearances (and a few saves from Paul Robinson) ensured Blackburn would go home with the point they deserved.

T. Howard - Even though he probably should have done better on the goal, he still had a good game in my book with a crucial early save and some brilliant distribution. 7
P. Neville - Solid as usual when he plays right back. Even came close to netting a rare goal. 6
S. Duffy - Really enjoying watching this kid play. He'll make his mistakes, but he's still learning and looks Premier League worthy already. Also struck the crossbar from a Baines free kick. 8
J. Heitinga - No complaints, did just fine. 6
L. Baines - Certainly played well enough. It's a mark of his greatness that a performance like today's could be seen as a slight disappointment. 7
L. Donovan - Had a weird day; sometimes he looked like the best player on the pitch, but he also made several silly mistakes with the ball. 6
D. Gibson (Stracqualursi 86) - Had another steady game for the most part. 6
M. Fellaini - Sure, he probably handled the ball to allow Cahill to tally, but it was subtle enough that he got away with it and he was unlucky not to score himself later on. Finally getting forward more. 8
V. Anichebe (Vellios 79) - Just didn't look up for it today. Should have been subbed earlier. 5
T. Cahill - Should go without saying that he had his best game in ages, and the goal seemed to galvanize him. 7
L. Saha (Drenthe 53) - The usual disclaimer about his lack of service, but he was soooooo quiet today you barely knew he was there. 4

R. Drenthe (substitute 53) - Ran at defenders and at the least offered more than Anichebe in the attacking half. 6
A. Vellios (substitute 79) - Failed to have much of an impact on the game. 5
D. Stracqualursi (substitute 86) - Did well in very limited action, winning a few aerial challenges. 6 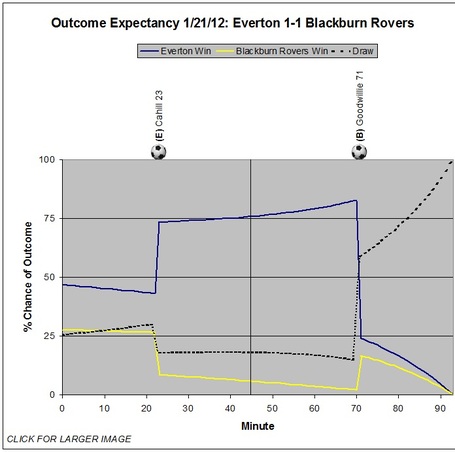