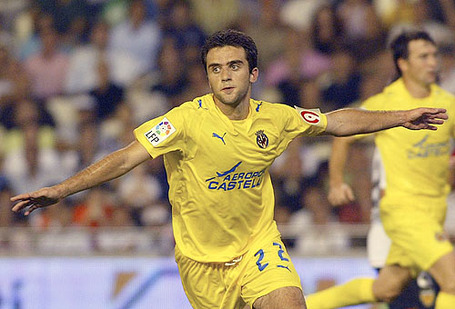 Tomorrow, Everton host Villarreal in their final preseason match before the opening day of the season, and their is still much to be desired from the Blues after a slow preseason. Though we have yet to see our full first eleven, our performances have still been disappointing. The most recent disappointment was just a few days ago, where a Bremen side that finished 13th last season ran the match, and a 1-0 scoreline was generous. Luckily, these games don't mean anything, so Moyes and his men will hopefully bring their A game when it matters against Spurs.

The last match between the two sides was much more than a friendly. The last time Everton had a taste of European competition at the highest level, the were beaten by Villarreal in confusing fashion. The equalizer from Duncan Ferguson was disallowed because of a ghost foul from an Everton player, and Everton crashed out of the Champions League and have yet to return. But this match has slightly less importance to it. Although just a friendly, this match will at least give us another chance to evaluate the squad against top competition.

The Yellow Submarine has been on the rise for the past decade. They missed out on a automatic Champions League spot last season, but are still have a chance via the play-offs and boast a formidable side that provided some entertainment in La Liga other than Barca and Madrid. Giusseppe Rossi and Nilmar were one of the most productive strike duos in Europe, and their understanding between one another has been lethal for opposing sides. Santi Cazorla and Joan Capdevilla both left this summer, and it remains to be seen how that will effect the squad. They have performed decently this preseason, and have been getting better as they approach the beginning of the new season, something we cannot claim. Coming off a beating of Lazio in which they controlled the match, Villarreal seem to be rounding into form at the right time.

Everton, on the other hand, haven't often been impressive thus far this preseason. Most teams have new signings to integrate in the preseason, but we are left to give the youngsters a run out. Ross Barkley has certainly been exciting, though we shouldn't crank up the hype machine just yet. It has been good to see some of the guys who only got a taste of first team football last year get a chance to show their stuff, and I'm interested to see how Moyes will integrate them with the first team when it counts. Tomorrow, I couldn't say whether Moyes will continue with the experimental lineups or whether he will go with a preview of the Tottenham match, but we'll see. The boys should all be rounding into match fitness and can hopefully put on a better performance than the Werder match. I won't be able to catch the match as I will be at work, but tune into our Gamethread tomorrow and post your comments. COYB!