Everton Players Poised for a Breakout

Share All sharing options for: Everton Players Poised for a Breakout 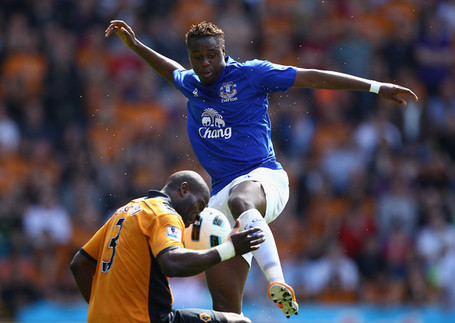 I had hoped that by the time I got around to writing this, there would be some fresh faces to discuss, but obviously that's not going to happen. There's no need to revisit our current financial situation on this site or anywhere for that matter, so I'll just leave it at that. That being said, there is some young talent already in the ranks that I am particularly excited about, despite little experience at this level.

I couldn't decide exactly how I would define "breakout," whether it was a breakout into the Everton first team, or a current first team player making his mark on the Premier League, so I went with a little bit of both.

There are some exciting young players whose progression over the past few seasons has been exciting, or have just recently joined the squad, who I'm expecting to make a mark on the first team squad this coming season, and possess varying skill sets that could serve the first team well, and I'll start with them.

Gueye is the young player I am most excited about. Some aspects of his game remind me of his countryman, Louis Saha, but is different in some good ways. With the injury bug in full swing last spring, he got his first taste of first team action in the Premier League, and though he wasn't perfect, he gave us a preview of the talent he possesses. I was particularly impressed by his skill and tactical versatility. He is listed as a forward on the official Everton roster, but in his first full start against Wolves, we saw him play left and right winger, as well as in the hole behind the striker, and we witnessed one of our most fluid attacking games of the year as he switched spots with Osman and Bily throughout the match. He should have finished better for his first goal when he came on as a sub the week before, but regardless, put in a good showing in that match as well. Like Saha, he is good with both feet, and has a very powerful shot, but also has an eye for that killer pass playing in midfield. I think he will be given more chances this season to show the full extent of his abilities, and with some more top flight experience under his belt, he should hone the imperfections in his game and become a more rounded player, and should be a good asset for Moyes going forward.

Another player who got a few chances to play during our spell of injuries, Vellios is a large physical specimen and though is still quite young, will get a chance next season to solidify his spot in the senior squad. A January window steal for David Moyes, he is a long term project we want to develop, but given the status of our squad and striker options, and the unlikelihood of seeing many new faces, he should be given a chance to shine. He is big and strong, uses his size well and is a good header of the ball. Though he didn't see much time on the pitch, I was impressed with his movement and hold up play. While not spectacular, he was responsible with the ball and wanted to do something effective with it, which many young players take some time to learn. Given his athletic ability and maturity, he has the keys to be an effective forward, all he needs is some more training time with the first team, and some more game experience in the Premier League to perfect his game and contribute regularly to the first team.

Dier is an interesting centerback prospect for several reasons. He comes from a footballing family, and his family moved from England to Portugal when he was just seven. He grew up in the youth ranks at Sporting Lisbon, a program that puts a lot of emphasis on technique and skill, and despite his impressive physical size, he is very confident with the ball. He is young, but Sporting signed him onto the full squad last April, beating Arsenal and Manchester United to the punch. Though he is just on loan this season, he has expressed his desire to return to England for his football, and Moyes would be wise to try and lock him down after a full season on loan. Many have declared him the future of the English National Team, and though it is far too soon for that to be determined, the hype surrounding the young defender is surely not just a fabrication of the media. He is tall enough to deal with aerial threats, and has been heralded by coaches and scouts for his skill with the ball, as well as defensive positioning. The Portugese league is not known for it's physicality though, so training alongside Distin and Jagielka will certainly do him some good in that regard, and with his combination of strength, skill, and positioning, he should be a useful player for us. He might be young, but Moyes wouldn't bring someone in on loan to not even give them a shot to prove themselves, so we should see him get a run out on several occassions.

There's also a few guys I think fall into the other category of "breakout." Some players may be household names to us Everton supporters, but maybe haven't burst onto the scene quite yet for other teams.  For example, we might consider them a vital asset to the squad, but other teams aren't strategizing against us with that player in mind quite yet. Next season, for these players, I think that will change.

Some might disagree with me on this one. Coleman was in the running for PFA Young Player of the Year and also was capped several times by his national team. But I personally feel like he hasn't even scratched the surface of his true potential. He burst onto the scene last season and was one of the most exciting young players to watch, but going into this season, we aren't really sure what position we will se him play. Moyes has stated his desire to make Coleman the successor to Neville at rightback, but Coleman has lit up the Premier League as a right winger on many occassions, and still needs to improve on his defensive game to be a consistent rightback at this level. My opinion is that next season, Coleman will get a run out at both positions, and will be a star in the league as a right sided player. I don't think he has reached that point yet where opposing teams highlight him as an impact player, and certainly our left side has been more consistently our channel of attack, and opponents look to defend Leighton Baines more than anyone else. Also, because of our reliance on the left side for attack, Baines is often caught upfield on the counter, and that side has consistently been our weak point on defense. With Coleman counteracting that and channeling more attacks down the right, we should be a more well rounded side on both offense and defense.

This is another one that I might get some flak for, but hear me out. There's no doubt that Beckford had a successful first Premier League season. To make the jump in leagues like he did and score 10 goals in all competitions is definitely impressive, and his stunners against Bolton and on the final day of the season against Chelsea display his obvious ability. But I think under the right circumstances, Beckford can be a force to be reckoned with. He needs to perfect certain parts of his game, like his movement, hold up play, and finishing. He missed several easy chances in big matches, and his attitude and off the field problems popped up a few times, the most notably when he fumed at being taken off and when he was late to the Reading match when he was listed as a starter. Those kinds of things cannot happen if you want to succeed in this league, and I think he knows that now. His movement in front of goal has been good and he has a goalscorer's instinct, but he needs that killer instinct that defines a quality striker. Also, he plays best in a two striker system, and all too often he was run out as a single striker last season, which isn't his style. Perhaps if he can improve his passing and hold up play, this could be possible, but I think he would play best alongside a target striker, and hopefully we won't have the injuries up front like we did last season and he won't have to play alone up top. This might be a confusing choice as a breakout player for some, but I think Beckford is poised for a breakout not for Everton, but in the eyes of the Premier League, as a quality striker that other teams fear when they go up against us.