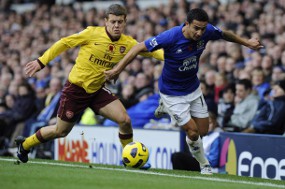 The month of October saw a promising turnaround from the Toffees, extending their unbeaten run to five and giving fans hope they could erase their poor start to the season and climb the table. Unfortunately, they reverted to their previous form, drawing matches they should win, and losing those they should at least get a point from, despite controlling the possession and run of play for large spells of some matches. While this month was certainly not as pathetic as the first two, Everton failed to continue their good run of form long enough to legitimately scare opposing sides. The first match of the month saw Everton travelling to Bloomfield Road for the first time since 1971 to play Blackpool.

Since the promotion of the Seasiders to the Barclays Premier League for the first time, most had predicted the same old tale for outmatched sides in the league, and thought surely they would be relegated, instead, they brought a refreshing, attacking style against even the top sides in the league, and though they were often left open in the back, their willingness to attack was respectable, and produced some thrilling matches this season.

This match was no different, with an end to end affair in the pouring rain. Everton dominated large spells of the game, but as usual, couldn't turn possession into clear cut goal scoring chances, and fell behind in just the tenth minute to a classy curling free kick from 25 yards out from Neil Eardley. Everton responded perfectly though, with a goal just three minutes later. Tim Cahill scored with his head yet again for his 50th Premier League goal from a fine cross from Sylvan Distin to pull the Toffees level. Everton took control of the match and had several wasted scoring chances, only to fall behind again after a goal mouth scramble. David Vaughn collected his own blocked shot to put away his second attempt. But yet again, the response was quick from the Blues, as former Blackpool loanee Seamus Coleman leveled the scores just minutes later. Collecting a poor defensive header, he weaved into the box and fired a hard shot that the keeper could only get a hand to, but not keep out. Both sides created several more chances throughout the rest of the match, but in the end, both sides settled for a point.

The following week saw Everton host Bolton. Yet again, the Toffees dominated possession, with a total of 65% on the day, but failed to capitalize and get the goal, as several chances were squandered. The frustration was evident in the Everton side, as  they controlled most of the game, but couldn't quite break Bolton down, and the lack of firepower up front was yet again on display. The frustration culminated in a late sending off for Marouane Fellaini, who had only just returned after a spell of four matches out injured. Shortly before the red card, 62nd minute sub Ivan Klasnic had put Bolton ahead off of a quick counter attack that caught Everton too far upfield. As stoppage time began, the home fans were yet again left disappointed by our inability to score goals, despite controlling most of the match. But Jermaine Beckford, who had only replaced Saha in the 82', scored his first goal on a brilliant volley to rescue a point at the death. Despite at least earning a point, Everton were frustrated again at their inability to finish the chances they created.

The next week, Everton welcomed title hopefuls Arsenal to Goodison. It was a fairly even match in the opening quarter of an hour, with Arsenal gradually taking a slight advantage. The match was a bit scrappy, as both sides were sloppy in possession, with Everton lacking creativity and Arsenal uncharacteristically misplaying passes. Cahill was wasteful with an open header off a fine cross from Coleman, but shortly after the half hour mark, Nasri fired a hard shot which Howard parried and Arshavin collected to lay off for Sagna, who was poorly marked in the box. From a very tight angle, he fired a bullet into the roof of the net to silence the home crowd. On the other side of half time, Arsenal went two up through Cesc Fabregas. A simple one-two disected the Everton defense and Fabregas made no mistake in the finish. Moyes put on 3 strikers and switched to a 4-3-3, but only conceded more possession to Arsenal, and Everton only got a goal to save pride in the 89th minute. They pushed a little more in the four minutes of stoppage time, but it was too little too late, and the unbeaten streak was ended.

The following match, Everton travelled to the Stadium of Light to take on Sunderland, in a fixture Everton expected to win, having won four of the last five matches between the two. The Black Cats had just come off a stunning 3-0 win at Stamford Bridge, but Everton were quick to the punch, as Cahill headed home in just the 6th minute, again from a pinpoint Baines cross. The two were seemingly keeping Everton from the drop zone early in the season with plays just like this. Everton again won the possession battle, and created several chances, including a Cahill shot cleared off the line, but couldn't extend their lead. By the 70th minute, Manchester United product Danny Welbeck put Sunderland up by a goal, despite long spells of Everton dominance. Late in the match, Arteta leveled with a fortunate goal that took a wicked deflection into the side netting leaving the keeper helpless. Everton were certainly happier with a point than nothing at all, but were again frustrated at their inability to put the match away after going ahead early.

Everton would finish the month with one of the most embarrassing losses of the season. West Brom had surprised some teams already in the season, but were on a significant winless streak, and playing at home, Everton expected nothing less than the full three points. The ensuing display was nothing of the sort, as a West Brom ran riot on a porous Everton defense. The absence of some key players was clearly obvious as Everton went 2-0 down inside half an hour. Cahill pulled one back just before half, and Toffee fans expected an energetic start to the second half to get back into the game. After a scuffle that sent the crowd into a raucous. Arteta and Jara got into it shortly after Jara had elbowed Baines in the face, and after Arteta retaliated from a harsh challenge, he was promptly sent off. After this, Everton had little hope to get back into the match. Some chances were created, but none proved to even the score, and by the 87th minute, Everton were down 4-1 after a goal from Tchoyi and an own goal from Sylvan Distin, in what was a match to forget for anyone in Everton blue.

So, after a very promising month, Everton turned around in November to get just 3 points from a possible 15, and fell down the table yet again. It was the same old story, as Everton often outplayed opponents, just to find that their lack of firepower on the front line yet again failed to complete the chances that were created. The Blues scored 5 goals in the month of November, but conceded 9, and went into the final month of the year shaking their heads, wondering where the goals would come from, as they often dominated the run of play in matches, but lacked a proven goalscorer (one that could stay out of the injury room, at least). As the silly season approached, Evertonians hoped Moyes could add to the strike force to push up the table in the second half of the season, but knew in their hearts he was limited by funds, and that the same old problems would plague Everton again and again.