I don’t really like Everton players playing for England as it usually does us more harm than good. Andy Hinchcliffe earned a debut when at Everton, and then moved to Sheffield Wednesday. Nick Barmby was an England regular when he moved to us and continued to earn a starting berth until the brainwashing from within began and he made the career boosting move over there. Francis Jeffers played and was signed by Arsenal, Wayne Rooney by Manchester United; now Phil Jagielka is being beady eyed by Arsenal and Leighton Baines by the denims from the City of Manchester.

However, I do like watching England and consider myself patriotic. I like it when England win, and dislike it when they lose. I enjoy watching how different players from different leagues in different countries match up. I like dissecting shape, movement, positioning etc. Its eye opening and is a good education for me.

Anyway, Capello sprung a surprise before the game when naming his starting XI. The Italian, paid £6million per year to solve the problems that traditionally face England during major international competitions, decided that England’s in form attacking player Ashley Young would start from the bench. Capello went for Joe Hart in goal. Joe is definitely England’s number one by a mile. He should have played in the world cup, but then the manager picks the keeper and vitally he got this one wrong in South Africa. Hart started nervously and was probably partly to blame for the Swiss’ second goal, along with others. 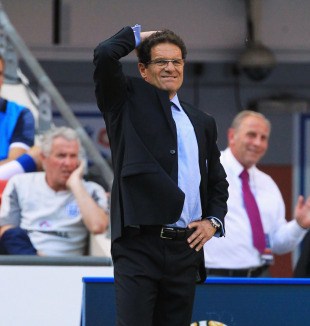 The back four consisted of Glen Johnson, Rio Ferdinand, John Terry and Ashley Cole. On paper this back four looks very solid indeed. In reality it was far from it. Johnson is poor defensively, Ferdinand looked two yards off the pace v Barcelona one week previous and looked one yard off it on Saturday, Ashley Cole was injured making a tackle, John Terry was the only defender who looked anything like international standard. Ferdinand was at fault for the Swiss’ first goal. A free kick was conceded as the Swiss attacked down the left – about 40 yards out. Barnetta stepped up to cross it and played a lovely curling ball in towards the back post for an attacker to glance in, or an England defender to head away, or…. To just go in. Ferdinand completely misjudged the flight of the ball and jumped in vain as the ball floated two feet above his head and past the helpless Hart into the net.

Capello decided that with his striking options limited due to the suspension of Wayne Rooney, Jermaine Defoe’s injury being so serious he went to Vegas for treatment that he would play a five man midfield. The unit consisted of the impressive Scott Parker holding in front of the back four, Frank Lampard and the ever improving Jack Wilshere ahead of him, and Theo Walcott on the right and James Milner, that central midfielder with a right foot, on the left. Milner tried, but was ineffective – again a Capello error. Walcott started positive but despite having the beating of Reto Ziegler (and for that matter anyone) for pace, he just couldn’t get into the game. Parker held the midfield together very well and allowed Wilshere and Lampard to create. However, it seemed a little crowded in the middle and the only thing Lampard contributed was the penalty finish. He was rightly replaced at half time. Bent also looked uneasy up front and despite trying he ended up frustrated and registering a blank.

On the half hour Ashley Cole was replaced by our very own Wolverine look alike Leighton Baines. In many opinions Baines is the best left back in the country, and therefore one of the best in Europe. He is fourth in the assist table in the whole of Europe and top of the assists table in the Premier League. He has committed less fouls than Cole and the other stats are much of a much-ness, mainly based around team achievements.

Baines’ first contribution was a trademark burst down the left to be brought down and earn a free kick. He settled in quickly and performed very well, providing an assist for England’s equaliser after playing a nice one two with Milner before chesting down for Ashley Young to fire home. Baines did his England future no harm at all.

At half time Fat Frank was replaced by the surprise exclusion Ashley Young. The Villa man went straight alongside his club colleague up front. This allowed Wilshere to come more into the game and express himself – an opportunity he grabbed with both feet.

On 78 minutes, the ineffective and frustrating Theo Walcott was brought off and replaced by Liverpool target Stewart Downing, a left footed left sided player deployed by Capello on the right side of midfield. This meant James Milner was kept on the left. There was no doubt that England had the second half but just couldn’t test the goalkeeper enough to wear him down to the point of concession. Young tried again with a nice low drive from 20 yards which the keeper parried into the path of Darren Bent. However, the excuse of "rrr it was on my left foot lad" just wasn’t washing as he blazed high and handsome into the crowd with the goal at his mercy.

It turned out to be a very frustrating evening for the English, with only Terry, Baines, Wilshere and Parker putting in shifts of note, and it spoke volumes as the announcer named substitute Ashley Young as man of the match.

It all went wrong for England before kick off with the manager’s team selection. Milner on the left, Lampard in the middle, Bent up front on his own, Crouch – with a record of just under a goal every 2 games not even involved, and an ageing Ferdinand at the heart of defence.

The Swiss set their stall out to keep compact, keep their shape and hit on the break – a tactic very familiar to Capello considering his Italian heritage. They did so very effectively and frustrated England with two set piece goals. The second was criminal. The 5’5" wall of Walcott and Milner decided to crack, the centre backs didn’t track the Swiss players’ run in front of Hart and I can only assume the England keeper was waiting for the runner to touch the ball before realising this wasn’t true and trying to divert it around the post with his foot.

Capello blamed tiredness for a "lack of energy." Well, Fabio, I’m not having that, England fans aren’t having that, and your own captain isn’t having that. For the record, Barcelona played 52 games this year, more than any team in Europe, on their way to a domestic and European double. Did they look tired and worn out against Manchester United the other Saturday? Did the manager of Argentina, or Spain, or Holland, or Brazil come out and say "oh they have had a long season, they are tired." No. And it isn’t like England was facing any of them either (thank god!); it was Switzerland – 19 places inferior in the Official FIFA World rankings. The problem lies within. The selection of a right footed central midfielder on the left hand side, the insistence on playing Ferdinand, the isolation of Darren Bent, the inclusion of Walcott and Lampard all contributing factors to a very poor first half.

I think it’s time for the Johnsons, Ferdinands, Coles, Lampards of the England set up to step aside and allow the fresh blood to come through.

A friendly against world number two Holland is next for the Three Lions. And I would like to see a team of Hart, Walker, Jagielka, Terry, Baines, Young, Wilshere, Parker, Johnson, Rooney and Bent.

Blues around the world

Phil Jagielka was an un-named sub for England at Wembley

John Heitinga played the whole of Holland’s 0-0 draw with Brazil and was booked.

Seamus Coleman was an unused sub as Republic of Ireland won 2-0 in Montenegro, a Robbie Keane brace securing 3 points for the Irish

Tim Howard was on the receiving end of 4 goals as World Champs Spain beat the Americans 4-0 in Massachusetts.

Victor Anichebe was on the bench in Nigeria’s ANC qualifier against Ethiopia, Fenerbache bound Joseph Yobo grabbing an equaliser four minutes from the end to salvage a point.

Jack Rodwell played a key role in England U21’s 2-0 win over their counterparts from Norway at St Mary’s Stadium, Southampton

Joao Silva helped Portugal’s under 21 side to a 2-0 win over Austria.