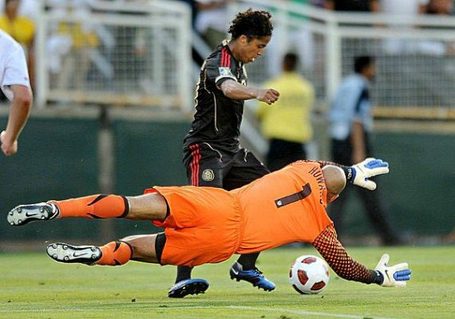 This one has taken me a few days to get around to completing, as the sting of a a loss to our biggest rivals has left me in a bad mood. But alas, I must move on and get back to work. Tim Howard and the boys of the US Men's National Team went up two goals in the first half hour against Mexico in the Gold Cup final to stun the majority Mexican crowd in the Rose Bowl in California, but a strong Mexican side led by Javier Hernandez and Giovani Dos Santos roared back to score four unanswered to take the Gold Cup and a berth in the 2013 Confederations Cup in Brazil. Obviously, the US were very disappointed, not just because of the pain of losing to a bitter rival, but because of the advantages that could have been had by going to Brazil a year before the tournament. I'll recap that match in the end, but first, take a look at Timmy and co.'s run to the final.

After unexpectedly struggling through the group stages, the Yanks faced an in form Jamaican side that had yet to concede a goal in the tournament. While history suggested the Reggae Boyz had no chance against the US, recent form suggested a possible upset. Jamaica has always possessed great athleticism and speed, but never boasted defensive solidarity or an ability to maintain shape. This tournament, however, saw a new style of play from the Jamaicans. To go with the usual speed and quickness, they had discovered a new, flowing style of attacking football and had finally solved the problems in defense that had plagued them in the past. In the end though, the US saw the Jamaicans off with relative ease, with only a small hiccup in the opening minutes that threatened to make things interesting. Early defensive lapses have become all too common for US fans, and yet again they conceded an early chance, but Howard saved the day yet again with a fantastic reaction save to keep out a point blank volley, and the Americans were lucky to see the shot off the rebound sky over the bar.

The rest of the match was the best performance from the Americans in the tournament. Howard had little else to do all day as the US dominated possession with a 4-2-3-1 that stymied the Jamaican 3-4-3 and took control of the middle of the pitch. A comfortable 2-0 victory saw them into the semi-finals to face Panama again, with a chance to prove that the group stage loss was a fluke.

Bob Bradley surprised everyone by sitting Landon Donovan for a second straight game, inserting Sacha Klestjan with the object to dominate possession again. As expected, Panama sat back and let the US pass in front of them for much of the front half, with only a few players looking to counter. In the group stage match, Panama pressed relentlessly and pushed up the pitch quickly on the counter. Here, they were content to sit back and absorb pressure, and were quite admirable in defense, clearing most aerial crosses, and staying disciplined defensively. Captain, Felipe Baloy, stood out from the rest, making several key blocks to keep the score level. Tim Howard had little to do all day, as the ball rarely came into his half, much less his box. That being said, his organizational skills and vocality were much needed as a leaky US defense solidified after the first Panama match to not concede any goals until the final, and credit should be given to Howard where it is due. Late in the match, the surprise addition to the squad, Freddy Adu, was given a chance to show why he had been chosen, and didn't disappoint. Aside from confidence in possession and pinpoint passing to settle the US attack, he hit a perfect ball to Landon Donovan on the left flank, who smashed a cross through a defender's legs to a sliding Clint Dempsey at the back post to send the US to the final, to face arch-nemesis Mexico.

The US-Mexico rivalry has been a heated one over the past 15 years, with neither side taking a clear advantage. Both sides have dominated CONCACAF for years, and have shared 9 of the last 10 Gold Cup championships. This tournament, however, Mexico entered the final the favorites. Despite the US gaining momentum in the lead up to the final, and Mexico letting off the throttle a bit in the last few matches, Mexico were the stronger side. With Javier "Chicharito" Hernandez coming off a stellar year with United, and Dos Santos pulling the strings from midfield, Mexico had stormed through the group stages with ease, lighting up the scoreboard and conceding just one. While the US hadn't conceded since the loss to Panama, the backline would have to be perfect to keep out the Mexican attack.

The match started exactly the opposite though. The US went up in just the sixth minute as Michael Bradley glanced a Freddy Adu corner off his head into the net. Mexico won the possession battle and were dangerous on the flanks, but couldn't create many clear cut chances in the early going, and were hit on the counter to go two down before the half hour. Some neat passing and a 1-2 with Freddy Adu and Clint Dempsey let Donovan loose in the box, who finished emphatically with his left foot to stun the largely Mexican crowd. US veteran and Hannover '96 captain Steve Cherundelo went down with a knock shortly after, and the shaky Jonothan Bornstein went to leftback as Eric Lichaj switched to rightback. The US defense that had finally become a unit through the tournament was shaken up and it's chemistry wrecked, and the lack of depth became obvious. While the US was riding high on its lead, it didn't last long as Mexico roared back to equalize before half. The young Dos Santos was the creator from all areas of the pitch, and his movement confused the back four. Michael Bradley and Jermaine Jones didn't shut down the service to the flanks well enough, and Mexico eventually opened the flood gates.

Howard had no chance on the first two goals, and didn't deserve blame for the third either. Though he could have perhaps done better on the fourth goal, it was really just a moment of pure brilliance from Dos Santos. Howard came off his line to collect the ball, but the quick-footed midfielder beat him to it and posted up on Howard to bye some time. He danced through the box and held it up for his teammates, but suddenly, without even looking up, chipped the ball perfectly into the upper left corner. Howard was off his line, but had several defenders covering the goal line, but the shot lofted perfectly over a leaping Eric Lichaj to put the game away. While the US had several chances at 2-2 to go ahead and at 3-2 to equalize, they didn't do enough to put the ball in the net, and Mexico were deserved champions.

The loss stung for many reasons. The rivalry between these two teams is bitter, as could be seen by the multiple scuffles on the field throughout the match, and the many that have taken place in the past. Neither side wants to lose this match, whether it's a tournament final or a World Cup qualifier or just a friendly. Even worse is the opportunity lost, as the Confederations Cup in 2009 was a great step forward for the US program, and a World Cup practice run in 2013 would certainly help the US in 2014. But now, for Tim Howard and the US, the goal is forgetting this tough loss and focusing on qualifying for Brazil '14.