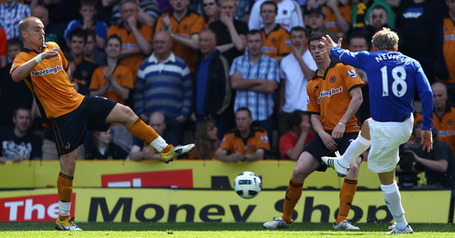 We're back with our month to month review of the season, and this time we'll take a look at April. Everton limped into the month with several key players on the disabled list, yet continued the all too common Everton trend of finishing the season strong. Why we can't play that well all season continues to baffle us, and Moyes himself can't even explain it. I suppose though we can be happy that we didn't give up on a failed season from our perspective, and at least came out fighting in the twilight of the season and climbed high up the table. That fact that there was even a slim chance for European qualification would have been laughed off months before, but the fact remained that with some help and a series of great performances, it was still possible. The first match of the month saw the Blues welcome relegation-threatened Aston Villa to Goodison.

With seven key players out, Moyes was forced to turn to a rather young and inexperienced squad, with most of the bench being composed of players without a single minute of Premier League experience. Despite this, the Blues controlled much of the early going and Villa looked sluggish. Leon Osman put his side up shortly before half with a beautiful mazy run into the box, but Everton started the second half slow and January signing Darren Bent hit back for the visitors shortly after the break. Even more woe was cast onto the Blues as both Coleman and Bily went off for treatment, and Magaye Gueye got his first taste of Premier League action. There was controversy as Beckford smashed a shot off the crossbar and onto the goal line. Beckford was left fuming as the referee claimed it didn't go over the line, although video evidence showed it cross the line, and the decision was even more crucial as Villa marched straight down the field for Bent to get his second on the day. Suddenly after thinking they were up a goal, the Toffees found themselves down one instead with 20 minutes to play. Fortunately, justice was served as Jagielka went down a little easy in the box and was awarded a penalty, perhaps with the official realizing his earlier mistake. Bainsey stepped up for the spot kick and calmly dispatched it to save a point for the home side.

The next match for the Blues was against another relegation threatened side, Wolverhampton Wanderers, this time away. This was one of our finer matches of the season, in my opinion, as each of our three goals were stunners, and the Blues dominated the tactical battle from start to finish. Magaye Gueye got his first start after a promising cameo the following week. He, Osman, and Bily were the attacking front three midfielders in the match, as they were very fluid in attack, all three playing both wings and the center, and the result was a dominant Everton performance. Wolves started fast, pressing the tempo, but were dealt an early blow as Beckford glanced a wicked cross from Ossie into the net. Everton went two up shortly after, with the most unlikely of goalscorers, Phil Neville, rocketing a shot through a jumble of players in the box into the side netting. But this somehow was not the best goal of the match, as Bily out-did his teammate with an absurd 30 yard screamer into the top corner.  The Blues easily rode the 3 goal lead to walk away with a fully deserved three points.

The following week, Everton got some good news as a few players were deemed fit to return to the squad that would face Blackburn Rovers. With Blackburn on a poor run of form, and Everton flying high after the previous match, nothing but full points were expected from the Everton faithful. As expected, the Blues came out flying and pressed the visitors early and often. The strong start was quickly tarnished as Heitinga left after 15 minutes clutching his hamstring, and Rodwell came onto the pitch for the first time in several matches. The Blues continued to dominate possession but couldn't really threaten the opposition keeper. They started the second half well, and deservedly went ahead through Leon Osman. Magaye Gueye took the corner short to Ossie, who found space for a shot and lashed it home, helped by a slight deflection. The match was put beyond reach as Coleman was fouled in the box, and Baines stepped up to the spot for the second time in three games and confidently fired it into the roof of the net. Everton were riding high on confidence at this point, and needed it, as they would travel to top of the table Manchester United the following week.

With such an injury ravaged squad, an in form United squad, and a poor record at Old Trafford, the match was never going to be easy for Everton, but nevertheless they were unlucky not to leave with a point. United dominated possession, but superb performances from Jagielka and Distin frustrated their playmakers and saved the Blues on numerous occasions, with Tim Howard making his usual wonder saves. The two defender's positioning was impeccable, and time and time again intercepted balls into the box, on the ground and in the air, and cleared their lines safely. Everton looked content to hit on the counter, as the dangerous Chicharito was always lurking on the offside line, and a high line would play directly into his hands. Late in the match, Distin was punished for what seemed like his only mistake of the match, as he failed to deal with the ball while under pressure, and conceded possession in a dangerous spot. An ensuing deflected cross floated to the far post and caught Howard at his near post, and Chicharito did well to win the header and tap in from close range. It was cruel, especially on the Everton center defense, who had played heroically all match only to be punished at the death.

Everton needed a good response and a short memory the following week, hoping for the full three points travelling to Wigan. Instead, the Blues didn't show up, despite seeing Tim Cahill and Mikel Arteta return to the squad. Everton started reasonably well, but were not very threatening. Wigan went ahead through a strange sequence of events, as Howard challenged Charles N'Zogbia in the box, with the home fans shouting for a penalty. Some players seemed to expect one, and some players halted momentarily. Howard was slow to get back to his goal, but still, it took a very skillful bending strike to get around him. Everton responded immediately, and had a few goal scoring chances. They then had a glorious chance to equalize when Ossie won a penalty shortly before the break, but Arteta hit a very poor shot, and Al Habsi guessed the correct way, and it was at an easy height for him. Arteta and Cahill were later pulled for Coleman and Beckford, and towards the end of the match, Everton finally played some good football. The Blues were given another chance from the spot, as Rodallega needlessly handled a cross in the box. Baines stepped up to show Arteta how it's done, and made no mistake in the finish, yet again saving points for his side.

So at the end of the month, with only three matches left in the season, Everton found themselves in a pretty good position, considering the early season woes that always haunt the Blue half of Liverpool. Despite being shorthanded in terms of player selection, Moyes managed to pull some tricks out of his sleeve and put together some good performances, despite dropping points against weaker sides yet again. All in all, Everton's performances in a time where the preferred first team was largely missing showed fans what to expect from the young players, and the future seems pretty bright. Because of injury, young players like Magaye Gueye and Apostolos Vellios got a chance to show the gaffer they deserved some more first team minutes, and I think both players will be given the opportunities to prove their worth in the coming season. So with just three matches remaining, Everton fans had some things to be optimistic about, but also very confused and frustrated about the fact that Everton finished the season in incredible form after a dreadful start, yet again, leaving so much to be desired about what could have been.