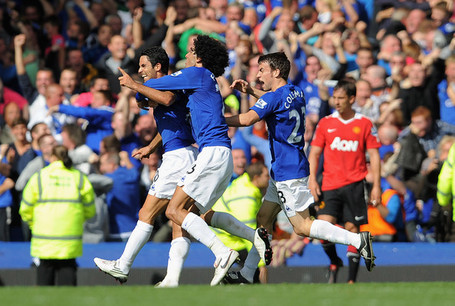 To continue our review of the season month by month, today we will review last September, as Everton found themselves winless in the league at the start of the month, and only collecting a single point in August. The initial optimism over the summer was soon shattered as Everton's lack of funds in the transfer market proved they could not have a deep enough squad to legitimately challenge for a Champions League spot.

For the first match in September, the Toffees welcomed Manchester United to Goodison, in what would turn out to be one of the most enthralling comebacks of the season. Everton dominated the first quarter of the match, and deservedly got a goal through Steven Pienaar in the 39th minute. But United hit back on either side of halftime, and went two up in the 66th minute through a brilliant counter-attack goal from Dimitar Berbatov. As the end of the match approached, it appeared United would surely leave with the full three points. But early in stoppage time, Tim Cahill knicked one back for the home side with a trademark header to make it tense for the visitors. A minute or so later, another great cross into the box from Baines was knocked down for Arteta, who smashed it home to stun the Red Devils. Moyes was left barking at the fourth official as the final whistle blew with Everton threatening to score again to complete an astonishing turn around. Although it took some late heroics, the performance from the Toffees certainly deserved at least a point.

The next match, however, would not play out the same, and was perhaps the most disappointing performance of the season, in my opinion. Despite a thrilling display of team spirit in the previous week, the team that hosted Newcastle the next week appeared a hollow shell of a squad worthy of such a comeback. The attack never really got started, and the away side deservedly went ahead through a stunning strike from Hatem Ben Arfa. Despite having a slight edge in the possession battle and more total shots, Newcastle hardly seemed troubled by a lifeless Everton side. After the match, the home fans booed their side of the pitch, and no one can argue that they deserved it. If our hopes for competing for a Champions League spot weren't already dead, they seemed miles away after this performance.

After a thrashing of Huddersfield in the previous round of the Carling Cup, Everton hoped to do the same traveling to League One side Brentford midweek. However, the 8,000 home fans witnessed perhaps their win of the season against a young Everton side including Magaye Gueye and Seamus Coleman. Coleman put Everton up in just the sixth minute, but Brentford levelled before the half, and had the chance to go up on the hour when Coleman pulled down Charlie MacDonald in the box. But Mucha, standing in for Howard, made a great save to keep the scores level. The scores remained unchanged through extra time and the match had to be decided in penalties. With the scores at 3-3, Beckford saw his shot blocked, and MacDonald made up for his earlier miss from the spot to put the pressure on Jagielka, who hit his shot off the post and out, sending Brentford through to the 4th round of the Carling Cup for just the second time, and frustrating David Moyes even more. Everton's usual slow start was in full swing.

Several days later, Everton sank to the foot of the table after a dull 0-0 draw at Craven Cottage. Everton controlled most of the match, but failed to create enough legitimate scoring chances to put the ball in the net. Seamus Coleman had another good match on the right flank, and Fulham were on their back foot for most of the match, playing on the counter, but Everton couldn't crack their back line for a goal. Mark Schwarzer and Yakubu were constantly at it, with the Yak forcing the Australian into several fine saves, but no chances broke the deadlock. Again, with Saha out and lack of a world class strikers, Everton failed to capitalize on the chances they created despite dominating large spells of the game. Moyes was pleased with the performance, but admitted our lack of finishing ability and confidence in front of goal, that was becoming a trend at this point in the season.

Bottom of the table was certainly not where we expected to see Everton at the end of September, but Moyes' inability to add to his squad in the transfer market displayed all too clearly the lack of depth in the side, and the lack of a 20-goal-a-season striker he so desperately needs. Despite some promising performances, we gained just 2 points from nine and crashed out of the Carling Cup to a far inferior side, scoring 4 goals and conceding 5, leaving Evertonians again wondering why we start the season so slow. After two months of the season, Everton found themselves at the bottom of the table without a league win, and out of the Carling Cup. Clearly, it was going to be a long season yet again for the Everton faithful.