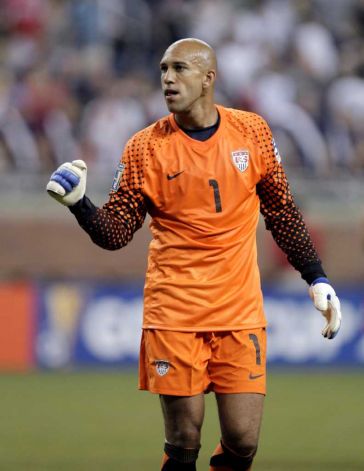 Several Everton players represented their countries in the past week, and as an American, I payed particular attention to Tim Howard and the rest of the US squad. Timmy and his American teammates endured an up and down couple of days in the lead up to the Gold Cup, as they were played off the field by the World Champions in an exhibition on Saturday, and then started their tournament a few days later on the right foot with a solid victory over Canada in their first match of the group stage.

The match against Spain was not much to behold from an American standpoint. I can't get too down on us for losing to Spain, as they break down teams all the time, however I was embarrassed by the scoreline. Del Bosque let Xavi start his vacation a little early, and sat Iniesta, while Puyol was out with injury.

Still, Spaniards boasted most of their World Cup winning side, while Bob Bradley chose to focus more on the opening of the summer tournament, just 3 days away, and sat most of his core players, including Clint Dempsey and Michael Bradley. Landon Donovan was out with illness. Even a full first team for the USA would have a rough go of it against Spain, with the 2-0 win in the '09 Confederations Cup being a rare occasion, in which the US relied on sticking to a strict rigid structure, good counter attack football, and a ridiculous performance from Tim Howard to end Spain's 35 game unbeaten streak and rob them of the international treble. That match was perhaps the greatest of his career, and displayed to the world what Evertonians already knew: he is capable of some miraculous saves.

This time, Howard had a rough day in the US net. He sat behind an inexperienced defense, including Jonathan Spector, who has been playing midfield for West Ham for the past few months, Eric Lichaj playing at left back for the national team for the first time, and Tim Ream, a young centerback with little international experience. They were thrown to the dogs, and the result was a 3-0 score at half time. Howard could do nothing on any of the goals, as poor positioning and man marking left him stranded. Spain dominated possession as usual, and as they did in the Confederations Cup, but this time the US wasn't able to relieve pressure, and didn't absorb it well either. The midfield never connected with the attack well and Spain frequently got into the box. Howard was left fuming at his defense, but could do nothing to stop the onslaught. Both teams made several subs at half, and the US veterans like Dempsey and Bradley entered the match. They relieved a little pressure off the back four, but never really threatened Casillas' goal. In fact, even Fernando Torres scored to put a little more misery on US fans. If the US had any hope of progressing to the Gold Cup final for the 3rd time in a row, they would have to quickly forget the loss and focus on Canada.

Canada hasn't qualified for a World Cup since 1985, but has proven to provide stiff competition against the US in tournament play in the past. While the US were favorites, they could not afford to look past the Canadians, and needed to quickly turn around from a humiliating defeat to establish their dominance over CONCACAF sides. From the onset, the US looked to control the tempo of the match and take the game to the Canadians. After being dominated just days before by the Spanish, they needed to prove to CONCACAF sides that they were the big fish in this region. As a resulte, Tim Howard had little to do until late in the match. He did a good job of keeping his back line in shape, and they limited Canada to only one half chance in the first half. The US went into halftime with a one goal lead through Jozy Altidore, but could have scored more. The Americans then went two up through a Clint Dempsey goal in the second half, and were firmly in control going into the final minutes. Still, it took a few Howard wonder saves to keep the game from getting interesting in the end. He first made a miraculous diving, fingertip save to keep out a hard shot, and on the ensuing corner, made a miraculous double save to preserve his clean sheet.

Watch his saves here if you haven't seen them:

Riding high on confidence after ousting the toughest team in their group, the US looked to again establish their dominance over CONCACAF minnows Panama.

Sadly for Howard and friends, that would not be the case. Possessing the far superior side, the US seemed to know this, as they came out flat and uninterested, clearly underestimating their opponents. Panama on the other hand had a fire under them, and pressed relentlessly. Tim Howard must have had flashbacks from his season past at Everton, as the Americans dominated possession (61%-39%), yet failed to capitalize and get the go ahead goal. Panama scored fortuitously after Howard saved a header from a free kick, and the stumbling Clarence Goodson couldn't help but keep the rebound out of his own net. The Americans were shocked, and Howard was understandably furious with his defense and midfield, as passing lanes were never shut off ahead of the defense, and his centerbacks were slow to step up to attackers when the ball got through. Panama went two up before half after young centerback Tim Ream committed a foolish foul on the edge of the penalty area attempting to clear his lines. Howard got close to the ensuing penalty, diving the right way, but couldn't get his hand to the shot as it was too hard and high for him to reach. If Howard was frustrated with his defense before, his anger was palpable now.

In the second half, the US came out with some more fight in them and a willingness to score. They finally showed that they were clearly the better team, creating many chances to go ahead. They did peg one back in the 68' through Clarence Goodson on a set piece, but failed to put away the slew of chances created. Panama parked the bus and defended in an organized, disciplined manner, shutting down the US attack through heroic blocks and some great saves by the Panama keeper. In the end, the US were left frustrated at their inability to come out of the gates well, and their inability to put away the number of chances they created. Now, instead of going into their final group stage match with six points and having the opportunity to rest some regulars in the match against Guadaloupe, the US needed a win to have any hope of winning their group, and a convincing one at that to ease the minds of an angry and confused fan base.

Guadaloupe was far from a challenging opponent for the USA, but they still knew it was a must win if they wanted to win their group and save face after the embarrassing loss three days prior. Despite only winning 1-0, the match was a completely lopsided affair, with the US dominating possession, and Guadaloupe hardly giving Howard anything to do all day besides intercept a cross or two or cut out a long through ball. The US poured the pressure on from start to finish, getting a goal in just the 9th minute through a stunning strike from Jozy Altidore. The rest of the match was a broken record of missed chances, especially from Clint Dempsey, who put himself into good positions to score on numerous occasions, and despite good service from teammates failed to score, and on one occasion practically tried to walk the ball into the net when a simple touch would have done the trick, only to have a defender slide in for the block.Despite winning the match and progressing to the quarter finals, US fans were concerned with the lack of finishing, as with a couple easy finishes, the US could have been up by three or four. Fans and players alike certainly knew that in order to reclaim the continental title, more goals would need to come.

It wasn't a routine group stage as most US supporters had expected. Instead of cruising through with three easy wins, the lackadaisical US side had to fight it out in a situation where they clearly should have had a walk in the park. Tim Howard though, can hang his head high, as he performed well in all three matches of the group stage, making some superb saves, displaying his incredible athleticism and reflexes yet again. He could do nothing on any of the goals he conceded. Though his back line was disorganized against an inferior Panama side, this had more to do with a poor midfield than Howard's command of his back line, and poor discipline from the centerback pair in front of him. Howard and Co. have now turned their attention towards their quarterfinal match against Jamaica, with the hopes of progressing and making it to the finals with an anticipated showdown with arch-rivals Mexico.