Everton: A Brief History – The Nervous 90s Part I

A look back at a dramatic period in Everton's history and one that still has a bearing on our current plight today.

Share All sharing options for: Everton: A Brief History – The Nervous 90s Part I 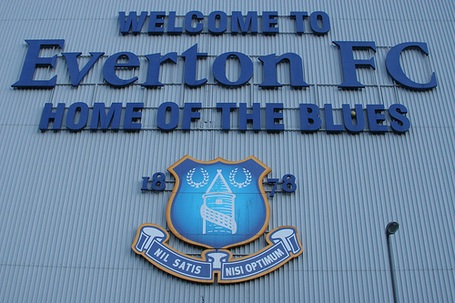 With the storm still swirling across the online Everton community following the release of Everton’s accounts I thought I would resurrect this feature looking at Everton’s glorious past. The previous account covered the silver laden 1980s. The 1990s – the decade where I started to support Everton – would be vastly different

Manager Colin Harvey always had a tough challenge trying to follow Howard Kendall and his all-conquering team of the 1980s. That title-winning side had all but been dismantled by the 1989/90 season yet big money had still been spent on the likes of Stuart McCall, Pat Nevin and Tony Cottee. But given what had gone before an 8th place finish in May 1990 was seen as a relative failure.

Everton failed to win any of their first six games of the 1990/91 season and a League Cup defeat to Sheffield United in October proved to be the final straw for Harvey. A nice bloke and a top Evertonian, he never quite looked comfortable in the role as manager.

As soon as he had left Goodison though he was back – as assistant again! Howard Kendall made a dramatic and emotional return to the club he had led to so much glory a few years previously and promptly brought back Harvey as his number two. Upon re-joining the Toffees from Man City Kendall famously said: "City was a romance, Everton was a marriage."

Blues fans were misty eyed at a possible return to the top.

He did manage to keep the Blues away from relegation that season, finishing 9th, though the main highlight was a dramatic 4-4 with Liverpool in the FA Cup. Everton would go on and win the second replay 1-0 but predictably lose the quarter-final against West Ham.

Kendall looked to re-build the side in the summer of ‘91 with a number of high profile purchases including Peter Beardsley from Liverpool for a bargain £1million. Mark Ward from West Ham, Matt Jackson from Luton, Mo Johnston from Rangers and Gary Ablett again from Mersey neighbours from Liverpool also joined the Goodison ranks.

But Beardsley aside, Kendall’s grand vision didn’t really work. In fact Beardsley kept the club out of trouble almost single handedly, ensuring he is one of a few players to be popular with both sets of Merseyside supporters. A final position of 12th though represented a worryingly downward trend for Toffees fans.

This is when I believe it all started to go wrong for Everton.

The Premier League began in 1992/93 and was meant to be the start of a glorious new era for English football, or as the Sky Sports tag-line put it: "A whole new ball game".

But Everton, one of the ‘big six’ who helped force through the break-away from the football league, were ill-equipped to take advantage of this football revolution. I firmly believe the problems we face today are directly linked with the early days of the Premier League. Everton's debut Premier League campaign ended with a distinctly average 13th place finish.

Owner John Moores died in the autumn of 1993 and there was much rumour and conjecture about where his shares would end up. Everton were rudderless and with the remaining board members unwilling to fund new signings Howard Kendall had to sell star player Peter Beardsley (in the mistaken belief that he was past his best) to Newcastle and only bring in Graham Stuart ahead of the 1993/94 season.

Three consecutive wins suggested things may not turn out that bad. But a 1-0 defeat to Aston Villa at the end of August – my first ever game at Goodison – triggered a run of three defeats on the bounce and things would never really recover. The sharp downturn in form and the board’s refusal to part with £1.5million for Dion Dublin saw Kendall leave for a second time in the autumn.

Again inertia at the very top saw the club suffer as seven matches (with just one goal scored) and nearly two months passed before Mike Walker, who had worked wonders with Norwich City, breezed through the door in January.

A 6-2 win at home to Swindon gave us all hope but things quickly began to turn sour. A 3-2 defeat to Division One side Bolton in the cup (my first night game and first sat in the Gwlady’s Street end!) brought us down to earth and was a sharp reminder of the limitations of the current squad.

Walker wheeled and dealed, bringing in Brett Angell, Anders Limpar Gary Rowett and Joe Parkinson and selling of Peter Beagrie to Man City. But it wasn’t enough to keep Everton in mid-table. A run of just one win in ten games saw Everton fall into the relegation zone ahead of the final weekend of the season.

The Toffees only chance of salvation was to beat Wimbledon – and hope other results went their way. Ipswich, Sheffield United, Southampton and Oldham were all involved with the Toffees in a tussle to avoid the final two relegation places. It would prove to be one of the most dramatic afternoons in Everton’s history.

Now, after seeing Everton win just once in the seven games I went to that season I decided to sit this one out – I couldn’t carry the guilt of jinxing the Toffees on one of their most important days in their history. As I chewed my nails listening to the radio at home I was least content in the knowledge I had done my bit to save the Toffees season (and no it wasn’t me who set fire to the Wimbledon team bus the night before the game, leaving their kit smoky, but in-tact - just!).

With the Park End under development the nervy fans, who had queued outside from 12pm, crammed into a three-sided Goodison and promptly saw the Blues go 2-0 down with in 15 minutes. The first a penalty following a ridiculous hand-ball by Anders Limpar and the second a comedy own goal by Gary Ablett.

Except it wasn’t funny.

Everton were staring the Endsleigh Division One (it even sounds bad!) squarely in the face.

Everton HAD to score next, and preferably before half-time, and salvation came for Everton and Limpar, who cleverly left his foot in as Peter Fear looked to avoid a tackle. The Swede went spinning to the floor in the area and the ref pointed to the spot. Graham Stuart showed balls of steel to tuck away Everton’s most important ever spot-kick (think Jags at Wembley, but 10 times more nerve wracking).

The Toffees went in 2-1 down at the break, relegation was still on.

A shot by Graham Stuart was palmed away by Hans Segers as the Toffees pushed for an equaliser soon after the re-start but Wimbledon were proving a threat at the other end as well. Stuart again had to be alert to clear a Dean Holdsworth header off the line with his shoulder.

But on days like this saviours come from unlikely sources and Everton’s came from Barry Horne, the battling Welshman who had only ever scored one goal for the Toffees. Horne chested down Neville Southall’s long goal kick before unleashing an unstoppable volley into the top corner. He probably couldn’t do it again if he tried but Everton didn’t care, survival was on.

But 2-2 still wasn’t enough. Southampton and Ipswich were busy getting the draws they needed to stay up and while Oldham looked doomed away at Norwich. Sheffield United though were beating Chelsea at Stamford Bridge, meaning the Toffees would still stay in the bottom three.

The crowd sensed the spectre of relegation and the euphoria of Horne’s goal ebbed away. We were into the final ten minutes of the season and we were still below the dreaded dotted line.

We were desperate, but it was to be our day.

Limpar found Stuart 35 yards from goal who looked for Cottee first time in the area. The diminutive forward laid it back first time to Stuart who, by accident or design, side footed the ball low past Segers and into the corner.

The striker darted away with one hand in the air, fans invaded the pitch, there was pandemonium in the stands, Walker somehow tried to keep his players calm. The comeback was complete: Everton 3 Wimbledon 2.

Incredibly Everton could have still gone down even with the win but two late goals at Stamford Bridge – the winner coming in the final minute - saw Chelsea emerge victorious 3-2 and send the Blades down, keeping Everton up – just.

The crowd invaded the pitch at the final whistle as if we had won the league, but in reality it was out of sheer relief.The club had stood on the edge but somehow had scrambled back to safety.

The ownership issue that had cast a cloud over the season was eventually resolved when Peter Johnson completed his take-over of the club in June 1994 – beating an offer from a certain Bill Kenwright.

With money promised for new signings and a new stand occupying the Park End of the ground the stage was set for a glorious new era.

How wrong would we be.